Share All sharing options for: Of Less Pressing Need

We've already been over the Grizzlies most marquee selection, Hasheem Thabeet (I'd link but it's only one post down), but the Grizzlies made some other acquisitions of merit in last week's draft. Tonight I'll give a run down on these three players, and what they might mean for the direction of the team. They will be ranked based on merit. Somehow Quentin Richardson still makes this page, if for no reason other than how silly and absurd it would be to leave him off when Marko Jaric is still on the team. 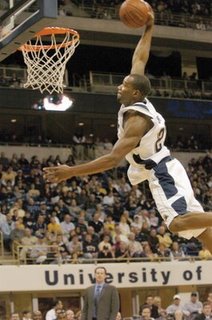 Sam Young: Coming from Pitt's #1 seeded college basketball team, Sam Young was a senior selection. He is 24 years old and, as is often the case with old players, boasts a refined game for a draft pick despite relatively limited athleticism. Not that Young is unathletic, but he's not the elite athlete teams oftentimes search for in the era of "upside." He is big and quick enough to play against any wing in the league, and can log minutes against opponent 4's as well, despite being more likely to play offense as a wing even while defending a big man. A former Grizzly, a younger James Posey (before he vastly improved his 3-point shooting), is an excellent comparison for Sam Young.

Young's main flaw is his isolation abilities. He has great ball fakes, but as DraftExpress points out, only converts on 30% of his isolation possessions. This is mostly because he has poor handles and doesn't pull up very well. Most 5th starters or role players don't do this well. This shortcoming is relatively meaningless in the 2nd round. Young shows potential to easily be the best return on pick value in this draft, as he could be starting next to Rudy this season depending on how the Grizzlies logjam at the 4 works out. 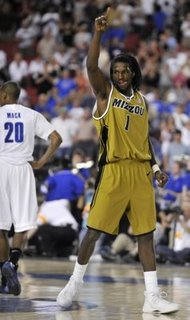 DeMarre Carroll: Three double letters in the name is always a good sign. Drafting an almost guaranteed 2nd rounder late in the first is almost never a good sign, but in this case wasn't a terrible move. By no stretch of the imagination is Carroll a great player, but he is a high energy guy who contributed to his Mizzou team very consistently with around 17 ppg, 7 rebounds, 2 assists, and solid defensive statistics. His toughness and energy are obviously calling cards, but DeMarre does have suprisingly acceptable handles and shooting as well. He is often compared to Renaldo Balkman, but this is partially because of his similar looks. In reality Carroll is more skilled and confident on offense, though he has every bit of Balkman's energy and defense.

Of course he is far from ready to be a wing at the NBA level, unless he somehow adapts to the Sean Marion model of the position, which namely involves finishing, tenacious defense, and rebounding. Still this is not an altogether likely role for Carroll, probably as best-case as it gets, as he lacks the athleticism and may not have the necessary skills multi-positional skills. DeMarre Carroll won't be contributing effectively anytime soon, and fulfills a role the Grizzlies now have a glut of, but was still a decent value pick and will push everyone in practice and add a swagger and toughness the Grizzlies often lack on defense.

Quentin Richardson: With Thabeet, Marc Gasol, Haddadi, Arthur, and Carrol all at PF and center, the Grizzlies couldn't give Darko the minutes he needed. As a result they moved his expiring contract for Quentin Richardson and his expiring contract, which is mostly equal. Q-Rich is a high volume shooter who is either on or off on the night, and usually takes somewhere between 5-7 contested 3's before he decides whether he should be shooting that night. Really a drain on any coach and the minutes the Grizzlies could be giving to younger, developing players. We already know that Quentin is terrible, there is no point in keeping him around or giving him time. I would much rather see an undrafted project logging minutes at the two, namely Paul Harris, then this trainwreck. He MIGHT be better than Jaric, but even that assertion is questionable at best; at least Jaric can pass and is goofy looking...Wait, Richardson is even more goofy looking and wears a headband? And dated Brandy? This trade is looking better by the minute, besides when you consider the fact that Darko is still younger than two players we drafted this year.

Tomorrow, a morotorium for Darko, and any other Grizzlies buzz.