If I wanted to tell you something positive, I would tell you that the Grizzlies finally held a team under 100 points. That's progress, right? Right...

Wrong. The Portland Trail Blazers handled the Grizzlies in the second half, slowing down the pace to traditional Oregonian and having their way with the Grizz in half-court sets. If you'd recall I wondered if this would actually benefit the Grizzlies -- it didn't.

Recap and awards over the jump, and be sure to check Blazersedge for some great perspective.

O.J. Mayo had a decent game, but in many ways the Grizzlies have traded one Iverson for another. It's becoming clearer and clearer that O.J. doesn't have an ounce of Richard Hamilton in him. He needs the ball -- constantly. Marc Gasol put up some nice numbers, but those stats were hollow since his opponent Greg Oden changed the game in his face.

While the Grizzlies were constantly in it, a third quarter drought left them hopelessly chasing for the rest of the game. Portland's defense wasn't fantastic, but it was great at making the Grizzlies beat themselves. They encouraged isolation, let Zach get away from the basket so he wouldn't hit the boards, and had Brandon Roy blanketing Rudy Gay so he barely even touched the ball to enter rhythm. 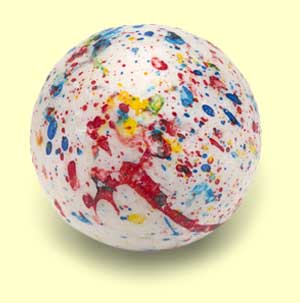 "The Mega-Bruiser Jawbreaker. A nominee for Zach Randolph's new nickname."

U-Turn- Rudy Gay has killed it so far this season, but looked unimpressive in the half-court sets. He struggled to get open and shot poorly when he was free. Gay had one nice dunk, but more than nullified that highlight with terrible free throw shooting. On the positive side, however, he did make some nice plays to get to the line and appeared to play better defense in the boxscore, though it had more to do with terrible shooting by Travis Outlaw.

Bitter Lemon- Marcus Williams is out of control; not in a good way either. He gambles constantly on defense even though I've never seen him swipe a steal. On offense he seems to think his name is Tony Parker, which it isn't. For marketing himself as a pass-first guy, Williams sure takes a bunch of near-impossible floaters.

Sleeping With the Enemy- Greg Oden changed this game. If Win Shares were a stat awarded, not a metric, then he would have earned one tonight. But I don't want to talk about Greg because he's boring. LaMarcus Aldridge went absolutely nutso against Z-bo tonight. Randolph was making an effort on defense and Aldridge was still dropping crazy jumpers right on the famous jaw-breaking cranium.