Share All sharing options for: Deny Thy Name: Grizzlies vs. 76ers Preview 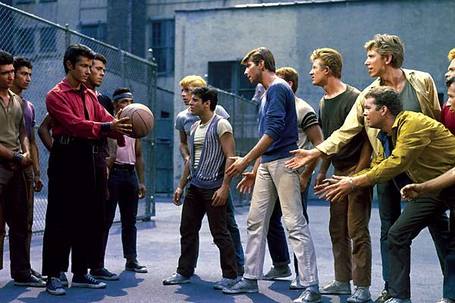 "Sharks vs. Jets was another basketball game involving confused identities."

The Philadelphia 76ers looked so promising last season. They looked like a team that perfectly understood its strengths and weaknesses, playing well within them. The 76ers were hawkish on defense, ran the break, and generally frustrated their opponents with endless energy. This season the 76ers have played it cautious, and are nothing like the 76ers that ran their way into some relevancy in the East last season.

Head on over to Liberty Ballers for Philly knowledge, and get over the jump for more preview and discussion.

Tomorrow the Memphis Grizzlies travel to Philly to see if they can build on their success, while the 76ers are looking to pull together under their new system and identity. If Elton Brand or Thaddeus Young can bring any consistent production to this squad, they're still dangerous.

Louis Williams is another important piece, particularly in his ability to play the role of a traditional point. When William has 6 assists or more, the Sixers are undefeated. This has something to do with pacing, more breaks typically mean more assists since Williams is more of a half-court scorer than floor general, but also speaks something to the need for more facilitation than Andre Iguodala can provide.

The Grizzlies will probably need to look to someone to pick up either O.J.'s or Rudy Gay's slack, because one of the two will be blanketed by Iggy in the game. I'm sure they'll still get something, but Iguodala is a killer on that end of the floor. Look for the other to score well against the mish-mash of 76ers at swingman, like slumping Thaddeus Young, Willie Green, or Jason Kapono. And I don't see Brand or the skeleton of the player once known as Samuel Dalembert limiting Marc Gasol or Zach Randolph.

Hopefully we'll see Tinsley get a little more time this game, but I'd look for Mike Conley to either step-up or find himself on the bench early and often so Marcus Williams can get more run. Conley needs to be in a sink-or-swim dilemma at some point so the Grizzlies know what they have at the position. Better sooner than never; there is no point in prolonging the uncertainty.

I actually like the Grizzlies again in this game. It should be tough to pick up a win on the road, but Philly might be the only crowd worse than Memphis, and the Grizzlies will have a day of rest under their belts. A blowout probably isn't in the cards, but Memphis definitely has a chance to earn themselves a little bit of a name in this one.