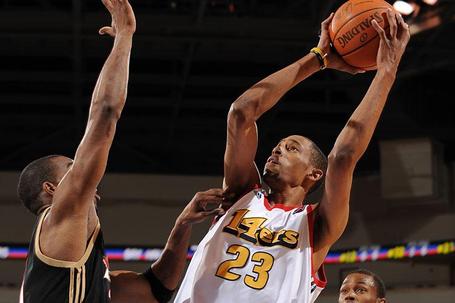 Despite missing out on signing Jeff Adrien, another of the Grizzlies suprise summer league forwards, Memphis appears to have come to terms with Trey Gilder on a non-guaranteed contract for the league minimum. Gilder has been very solid in the D-League.

Come over the jump for some analysis from RealGM, Ridiculous Upside, and of course myself.

Gilder looked very solid in the summer leagues this year in limited time. By my estimation he seemed to shoot the midrange shot a bit better and more confidently than DeMarre Carroll or Sam Young, and is big enough to guard even the longest NBA small forwards. On the other hand he is far too skinny to bang in the post at all. Some people compare him to Tayshaun Prince, in my opinion he is a bit more like former Grizzlies Hakim Warrick.

Here is a profile of Trey Gilder from our good friends at Ridiculous Upside. Based on what I've seen of Gilder I would agree with the bulk of this assessment. He will likely end up playing more minutes for the Dakota Wizards than he does the Grizzlies, but he does boast the athleticism and length to be an impact role player. Again I would compare his game to a taller Hakim Warrick, or very crappy version of Anthony Randolph, with probably something like Leon Powe upside.

Gilder likely won't see many minutes, since his tweener skills are largely replicated by the slightly shorter, but significantly stouter, DeMarre Carroll. Still he will be a great project player with considerable untapped athleticism and will give a bit of depth at both forward positions.