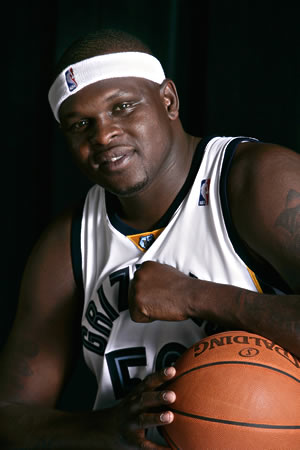 Is there going to be enough touches to keep the smile on Zach's face?

One of the motifs of the mainstream media's coverage of the Memphis Grizzlies this season is claiming that the Grizzlies have added too many offensive players, and, since basketball is only played with one ball at a time, all five of them won't be able to shoot enough to be happy.

Exploration occurs across the jump. Also please everyone feel free to comment, I'd love to see some fresh faces.

The root of the argument is that the Grizzlies didn't need offense with young wing scorers Rudy Gay and O.J. Mayo. The root of that argument is wrong. While it is true that you would prefer to have a team that's a happy medium between offense and defense, the Grizzlies really, really struggled to score last season. According to Hollinger's statistics, which aren't my favorite but are easy to read, the Grizzlies were 27th in the league in offensive efficiency. That is very bad. More, better offense was absolutely needed.

So we know that the Grizzlies added offense with Randolph's acquisition, but the big question  that this post is actually meant to address, is whether the Grizzlies will be able to get the ball in the hands of their high usage players often enough to keep them happy and keep the offense running smoothly. Without further ado, usage statistics from last year:

With the help of a calculator you'll be pleased to note that the usage percentages come out to 114.4%. Try to test me at home, I dare you.

Now, if you don't mind, I'd like to show you the same table from a few playoff teams: the Magic, Lakers, Nuggets, Trailblazers, and the Cavaliers. (Note: Not necessarily starters. Went by most minutes at each position.)

So what's the point? Well let me tell you what I cull from these charts in bullet form:

Looks to me like there isn't really much of a problem with shot distribution here, especially when you consider that the Grizzlies ran a relatively slow tempo offense last season, about 3 possessions per game below league average. This season I expect Coach Hollins, based on some of his comments, to drive up the pace, which should get the Grizzlies another 5 possessions per game or so. While that might not sound like much, given the distribution of usage percentages, those extra possessions probably means that most of the Grizzlies will have about the same number of shots to go around this year as last.

That is, unless Allen Iverson signs.

UPDATE: As far as possession redistribution in percentages goes, there are two options to get down to a similar number as other teams (about 109%). Each of the high usage players could reduce a decent bit, especially Rudy and Zach Randolph, probably accounting for about two shots each if the Grizzlies play at the same pace. Or Marc Gasol could follow the Varajeo/Pryzibilla path, in which case Rudy and Zach would only need to give up about one shot a game. I consider the second of these paths, with Marc as a designated hustle player and enforcer, the more desirable outcome.