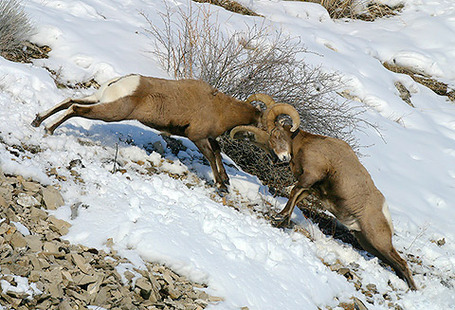 A Grizzly Bear and a Wolf fighting would have been disturbing, so I give you this.

The Grizzlies better beat the Timberwolves in Memphis, that's all I'm saying. What other preview do you need?

Al Jefferson and Kevin Love are obviously the team's strongest assets, and they've been less than ultra-productive lately, plus the Grizzlies front-court of Zach Randolph and Marc Gasol is similar. The biggest difference is that the Grizzlies bigs have been better this season.

Johnny Flynn is a rare player that Mike Conley matches up respectably against, Corey Brewer may or may not give a red-hot O.J. Mayo fits, and I don't even know who they'll send out to match Rudy Gay. It'll probably be some mix of Damien Wilkins and Ryan Gomes.

Anyhow, the poor fans at Canis Hoopus still have a few years to suffer, with the management change deciding to sort of half-scrap what looked like a respectable team before Al Jefferson's injury. The Wolves could be tough next year, and expect their fans to have their eyes on Rudy this offseason, but this year the Grizz should come away with an easy win.