The first half of this game was, while close, somehow incredibly uninteresting to me. Maybe I just don't like the Trail Blazers. Maybe, like Rudy Gay's jumper, I just wasn't quite feeling it. Seeing Andre Miller embarrass Mike Conley just was not getting it done for me.

So when the Grizzlies started pulling away in the third quarter, I decided it was time to pop in the 2K and get some franchise games in. Halfway through the fourth, right after splashing one in Jose Calderon's eye with Johnny Flynn, I happened to look down at the ticker and see the Grizzlies down.

Turning my League Pass back on, I checked over at Blazersedge's excellent gamethread to see what the hell was happening. It was technology to the rescue.

And man was it painful watching Portland pull away. The bench played particularly horrendous tonight, even by their standards, with Hasheem Thabeet and Sam Young combining for a stellar -32 in only 29 minutes played. Yes, it was as bad as it sounded for awhile.

But then all of a sudden things started getting just a bit less bad. The starters got back into the game and began playing the Blazers even. The announcers shouted that O.J. Mayo was heating up (not really). Zach Randolph made a legitimate hustle play. 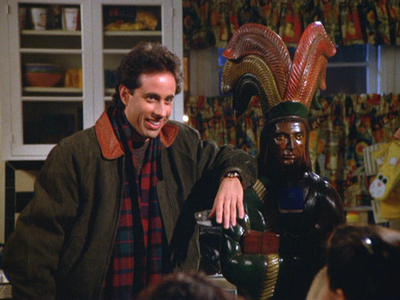 Juwan Howard talking it over with Coach Seinfeld during a late-game timeout.

The next trip down OJAM hit his lay-up and, since he was now on fire, he poked the ball loose from Brandon Roy's handle out on the perimeter. It was a hell of a gamble with the game tied and Brandon Roy being the cerebral equal of Professor Xavier. But it paid off, as Brandon Roy picked up a very, very ticky-tack loose ball foul to send Mayo to the line, where he'd hit the first free one to put the Grizzlies up.

After I turned the game back on, I don't think I looked away once. I don't think I blinked. And the Grizzlies never looked back either. They kept the pressure on by hitting some free throws and sealed this one away.

The comeback gave the Grizzlies their second win in Portland, their fourth consecutive, and their first game above .500. This Matt Moore guy's got our backs now, and you should, too. Wins like these go a long way towards making sure the TV stays on the whole game.