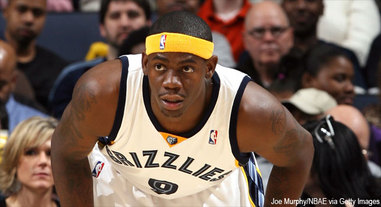 The Memphis Commercial Appeal is reporting that an MRI taken today showed that Ronnie Brewer's hamstring is torn.

Brewer went down on a breakaway in the 4th quarter of the game against Miami. He played just 12 minutes in his first game with the team, and this is the first significant injury he's suffered in his NBA career.

It's sad to see Brewer go down before I even finished posting the long analysis of the trade, especially since the injury occurred in what was already an awful game.

Team doctors are hoping that Brewer won't need surgery and that he could be back on the court within 3 weeks, but it's probably a bit more realistic to peg him to be out for around a month. A firmer timetable should be in place in about a week.

According to the Appeal, though, there is some room for hope:

"It's not something that should have long-range implications," Griz general manager Chris Wallace said. "From what I understand, if you're going to have a hamstring injury, it's one of the more favorable ones to have."

One bit of silver lining is that this injury should solidify any doubts about the caliber of Brewer as an individual, just listen to his perspective even after being traded in a salary dumb, barely even seeing the city, and then having this injury hit:

"When I went down, I knew it was my hamstring. Everybody thought it was my knee. I felt my hamstring pop. But I'm optimistic about this recovery," Brewer said. "To me it's disappointing. I let the team down and the city down. There was so much (hype) for me to come and be an instant fix for the problems on the bench.