Now I might not have the credentials to get a true vote for the NBA's end of season awards, but there's probably only a handful of individuals more qualified then me to give out the Memphis Grizzlies awards. Below you've got all the usuals: Most Improved Player, 6th Man of the Year (read: bench player of the year), Rookie of the Year, Defensive Player of the Year, and Most Valuable Player.

Most of these probably won't come as a surprise to anyone, though I suppose the ending might have a bit of a shocker. And if you have your own winners, be sure to post them in the comments thread.

So, without further ado, get over the jump for your 2009-2010 Memphis Grizzlies Award winners.

Marc Gasol: Last year Marc Gasol was serviceable; looking about 20 pounds slimmer this season, he was a keystone. With an elite field goal percentage, excellent rebounding even with Zach Randolph, and very underrated defense, Marc was playing at near-All Star levels in the first half. Even though he missed the last handful of games, the younger Gasol's growth was obvious. He simply doesn't make mistakes any longer, which is something you need at the thin center position. 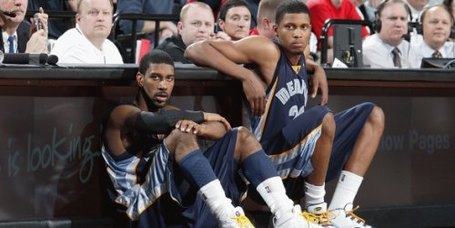 Rudy Gay: Admittedly you could probably put O.J. Mayo here for the exact same reason, but Rudy Gay boosted his offensive efficiency from 101 last year to 109 this season. While his counting stats looked about the same, his underlying efficiency improved by leaps and bounds. Defensively Rudy still showed a lack of focus at times, but definitely showed more promise than ever before.

O.J. Mayo: Read the Rudy Gay description and you've got the idea. O.J. Mayo saws his shots decline but played much improved defense at times and was far more efficient. His play at the end of games was particularly impressive -- almost as impressive as the fact that he willingly shared 4th quarter "go-to" status with Rudy.

Winner - Marc Gasol: No contest here. A little efficiency improvement from O.J. Mayo and, more aptly, Rudy Gay has nothing on Gasol. Gasol's PER jumped from 16 to 19, his rebounding rate stayed the constant even with Z-Bo, and his ORtg skyrocketed from 112 to 121. If there's one Grizzly who did suffer from not having enough touches, it probably was Marc. The good news? It didn't matter, he just kept improving fundamentally.

6th Man of the Year:

Sam Young: Obviously Sam played the most games as 6th man, but that wasn't necessarily always a good thing. Sam averaged 7.4 points per game in 16 minutes, and often looked out of control when he was the first option. With a bad offensive rating (102) and an even worse defensive rating (112) Sam Young's play made him more suited for 4 minutes a game then 16 and a key role on the team (22% usage rating).

Darrell Arthur: Once his game rounded out after undergoing pectoral surgery in training camp, Darrell Arthur stepped into the minutes void left by Marc's neck injury. Arthur produced on and off in his 32 games, and shot a bad percentage (43%) because he seemed unwilling to attack the basket or work in the post. Arthur was a decent defender, though, and that was something the Grizzlies desperately needed.

Marcus Williams: I don't remember if Marcus Williams was ever actually the first man off the bench, but he did average 14 minutes a game. Later in the season Marcus started to play better, but he absolutely struggled in the beginning. Looking at his advanced statistics, Marcus was a huge step down from Conley in all but assist percentage (the number of made field goals he assisted while on the floor). Still, his end of the year was compelling, as he began to make less stupid plays and commanded the 2nd unit competently. 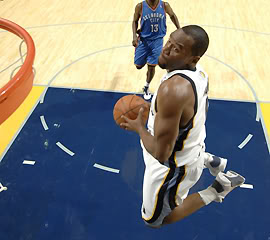 Winner - Nobody/Sam Young: Since nobody on the Grizzlies bench was better than average, I hate to even give out a sixth man of the year award. But compared to his competition, Sam Young was the only one who posted even moderately respectable stats over the course of the entire year.

Rookie of the Year:

Hasheem Thabeet: Since he was the 2nd overall draft pick, he's automatically opted into this candidacy, but he doesn't deserve it. Thabeet's play was largely unimpressive all season, though he did have a few slightly decent games after Marc's injury. Still this is an excerpt of what I wrote for Thabeet's league-wide Least Valuable Rookie win at SB Nation:

Thabeet's first half was so bad the Grizzlies tried to trade the rookie as a toxic contract to the Golden State Warriors.

DeMarre Carroll: Carroll showed toughness at times, especially as a defender, but for the most part he was not ready to contribute at the NBA level. His offense consisted of missed spot-up jumpers, and he showed very little improvement in his form and percentages. Defensively he showed promise in isolation, but Carroll struggles because he doesn't really have a true position to guard. If he puts on significant weight and strength he could be a lockdown, energy power forward, but this year he wasn't much of anything.

Sam Young: You've already heard Sam's story. The Grizz knew he was a potential steal in the second round, because he was considered ready to contribute at the NBA level right out of school. He did just that, albeit not quite as well as many hoped, and the Grizzlies have no room to complain about that. The problem wasn't Sam Young's performance, the problem was expecting him to be a sixth-man for a winning team in his rookie year.

Winner - Sam Young: A runaway victory here, Sam Young proved his trademark pump-fake and aggressiveness do translate to the NBA level. He'll only keep improving, and should be a legit backup for Rudy Gay as long as the Grizz keep him around.

Defensive Player of the Year:

Marc Gasol: His defensive rating of 108 wasn't great for a center, but he still was the cornerstone of the Grizzlies defensive schemes. Even  though Hasheem Thabeet is clearly the better shot-blocker, with Gasol out the Grizz obviously struggled -- even worse than normal -- to defend as a team.

Zach Randolph: Zach has a reputation as a poor defender because of his bad shot-blocking. With Memphis this season, however, he seemed to recommit on that end. Z-Bo was still a poor isolation defender, but his help was acceptable for a power forward, his steals were above average, and his defensive rebounding kept second chance points to a minimum. 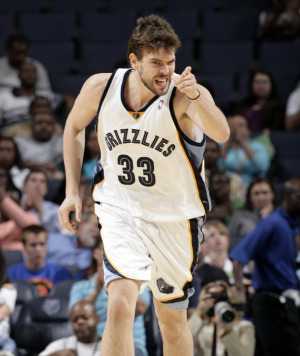 Winner - Marc Gasol: The obvious pick here, Marc Gasol commanded the defense and rarely required a double-team even checking the toughest matchups. His blocked shots weren't impressive, but he had above average steals for a center and was the only Grizzly who's help defense could be described as better than average.

Marc Gasol: We've already been over his contributions, and we all know his counting statistics don't jump off the page. Look, there's a reason the Grizz went 2-9 in their last 11 without Marc Gasol, his impact on the team was undeniable. Marc was a leader on both ends, a stand-up act, and helped the team before himself. On this squad fighting the urge for individual success was a quality worth an award.

Zach Randolph: Zach Randolph played every game this season. I bet he went to just about every volunteer event. He brought it almost every night. His fitness was the best of his career. The Grizzlies went from the bottom in offensive rebounding to the top all because of Z-Bo. His impact was undeniable, and this season would have been completely lost without him or Darrell Arthur at power forward.

Rudy Gay: Rudy didn't lead the team in anything this season. Zach Randolph beat him in points and rebounds, and Marc was obviously the better defender. Still he was the only true finisher on the team, routinely had the toughest defensive matchup, and his efficiency was partly because he was often the option once the offense broke down. That's a lot of responsibility, but Rudy thrived in the moment, hitting plenty of tough jumpers as the shot-clock ran down. Rudy's still not a true #1 offensive option, but despite adding Zach Randolph, he looked closer than ever to that profile this season.

Winner - Marc Gasol: I know I'm going to catch a lot of flak for this call, but Marc was the Grizzlies Most Valuable Player this season. Nobody was more efficient, he plays at the toughest position to fill, and Marc was oftentimes the floor general at both ends -- commanding the defense and passing out of the high post on offense. It's no surprise that everybody's efficiency plummeted with Marc out because he filled every role: glue guy, savvy leader, plus defender, and legitimate scoring option. What more can you want?