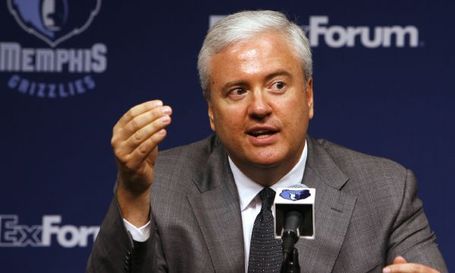 Earlier today the Memphis Grizzlies announced that General Manager Chris Wallace will remain in his post at the top of the Grizzlies front office for at least several years. Terms of the deal were not announced, as is standard procedure for general managers, but GM's are typically signed to three year contracts.

Chris Wallace is perhaps most famous around the league for trading All-Star power forward Pau Gasol to the Los Angeles Lakers in what appeared to be a horribly unbalanced deal at the time. Wallace, however, stood by his "three year plan" and the trade helped reshape the Grizzlies into a young, up-and-coming team.

But the toughest decisions are yet to come. Most GM's can turn multiple top 5 draft picks and tons cap space into an average team. Making the move to a 50 win team, and into the playoffs, is the next step, and that goal is much more difficult to accomplish -- and has led to a couple high-profile GM's like Danny Ferry, Steve Kerr, and Kevin Pritchard losing their positions.

This summer Wallace again has three valuable draft picks to use and will need to be more successful in the draft this year. He will also potentially need to negotiate contract extensions with Rudy Gay, Zach Randolph, O.J. Mayo, and Mike Conley in the next several years -- although choosing which players will need to stay and go will be another key challenge.