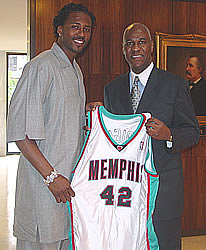 Lorenzen Wright, the former Tiger and Grizzly, is missing, according to his sister Savia Archie, as reported by WREG news in Memphis.

Wright was supposed to fly out of Memphis to an unreported destination on Sunday, and the family has not seen him since his departure.

His NBA career was not particularly productive, as Wright was something of a journeyman, but most Memphis fans still loved the 6'11" big man. Our prayers and wishes go out to his family and hope for Ren's safe return.