From the Grizzlies's official website, we have this incredibly useful little nugget of news:

The Memphis Grizzlies will make a major announcement during a press conference that will be open to the public at Noon on Thursday, July 8 in the Grand Lobby at FedExForum.

For Grizzlies fans who are not tired of the never-ending LeBron James self-congratulations-for-being-the-greatest-ever (except not), you can follow that over at the always excellent Fear the Sword and SBNation Storystream.

If you're into far less important, but similarly fake drama, sounds like you'll find that in the FedEx Forum lobby.

Word is Michael Heisley doesn't remember that most Grizz fans still hate the idea of an event like this after the Allen Iverson signing press conference, although other sources have confirmed Heisley is just hoping most fans don't remember The Answer ever joined the team.

In all seriousness though -- actually in no seriousness at all -- what the hell could the Grizz possibly have to announce? My top 5 guesses:

5) Mike Conley traded for Raymond Felton: Straight Up. No frills attached. Just pure Grizz improvement. But since I doubt the front office could ever hide something this shocking from Ron Tillery (for non-CA readers, that's a joke), alternatively, it could just be an announcement that Mike is on the trade block. After all, we don't seem to like to follow typical front office behavior any longer.

4) Thabeet has grown 3 inches: Thus making him fully Yao-size. The benefit is that he's probably tradeable for a second round pick at 7'6" tall. The downside is that the Grizz will keep him, and both his feet are already broken.

Another scenario, non-mutually exclusive, could include "Thabeet Tuesday," where Grizz fans receive free vuvuzela's before the games. No word yet on if this is meant to raise or lower attendance.

3) Zach Randolph donating his salary to a charity: Zach paid those folks gas bills last year. To get over his image problem, Z-Bo could donate his entire salary this season to the charity that needs it most -- The Memphis Grizzlies. With that extra $17 million in hand, Chris Wallace will promptly give that Zach 6 years, $105 million extension. Word is not in if that's next week's special Thursday announcement or if we'll know the numbers today.

2) Announcing the Rudy Gay extension: Seriously, though, this could actually be for real. You know Chris Wallace doesn't read the newspaper, and probably doesn't realize this is surprising nobody, since ESPN hasn't said a word besides LeBron in weeks.

1) REWIND! Throwbacks!: Probably putting way too much faith in the franchise with this one, but think about it, what better way to ring in the Rudy Gay era than to go back to "the Rainbow Warrior." I literally realized the innuendo after writing the sentence. In one year covering the Grizz I get one Rudy Gay name-pun joke, right? 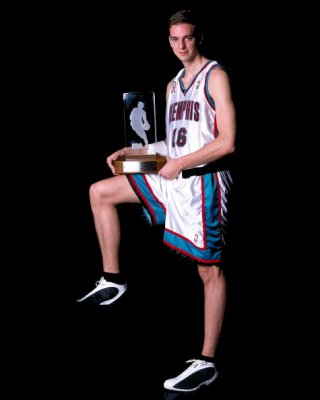 Hey, Pau, your foot is floating dawg. And you look like you're 12.

The main logo is going to change from the blue bear face back to the GRIZZLY EXPLODING FROM A MOUNTAIN, and FedEx is preparing a partner announcement to note that they'll be painting the Forum pink. With teal glass. Baller blockin'.