No starter played more than 19 minutes as the Grizzlies lost to the Bulls in Chicago, 92-88.

Share All sharing options for: Bulls top Grizzlies, 92-88, in preseason game No. 2

It was a typical preseason game last night as the Bulls and Grizzlies got together for what amounted to a fairly ugly game. The result, sure, was a "bummer of a loss," but when you consider that the Grizzlies played no starter more than 19 minutes and they were without Mike Conley, it's really one of those games you try to watch and pull the positives from, while not getting to angry about the outcome. 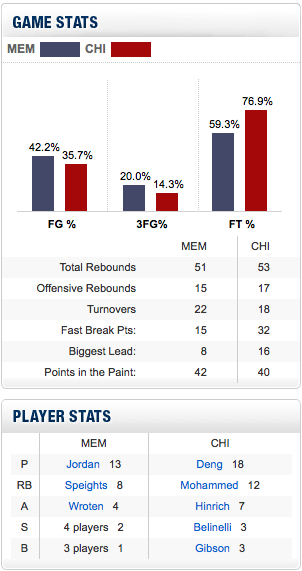 - The Grizzlies lost a game in which their opponent shot 35% from the floor and just 2-of-14 from beyond the arc. Yup, welcome to the preseason!

- Memphis turned the ball over 22 times, something we would have written an entire column about had this been a regular season game.

- Jerome Jordan lead the team in scoring with 13 points in 13 minutes. He was absolutely aggressive and showed some of that "upside" they've been tagging to him since he entered the league, but there's probably a 2% chance he sticks with the team, so, enjoy him now while you can?

- Jerryd Bayless started at point in place of Conley, and the results were... meh. He had 7 points in under 20 minutes, but also tagged three fouls, two turnovers and just one assist. Again, it's still early, but we really need to see some more play-making abilities from Bayless if he's going to be our backup point guard.

- Tony Wroten (or ROTTEN, as he was called far too many times last night...) played 19, somewhat timid, minutes. He also scored 7 points, but lead the team with 4 assists -- while turning the ball over 3 times. It was his first real NBA action, so we can't really get all over him for turning the ball over 3 times in 19 minutes, but he does need to now make adjustments. Of course he will, but this just goes to show that while he may be an exciting player, one day soon, we need to temper our expectations early on.

- Flip Murray had 11 points, doing what Flip Murray do -- the guy just scores. Again, there's really "no room" for any of these no-guaranteed guys to make the team, considering the financial situation, but it's nice to see that he took advantage of an opportunity and could, maybe, get a look elsewhere.

- Tony Allen hit his only jumper, a three, and while I don't expect him to make many jumpers this year, his shot did look slightly better. Buuuut, it's the preseason!

The watch in this game was to see how Bayless and Wroten would work at running the team. Both obviously need time to adjust and, in Wroten's case, improve. Again, this was a preseason game in which Wroten made his NBA debut and Bayless was running alongside a core of four who has been together for over three years now, give or take an injury or two. So we have to cut him some slack, but I think the struggle will do both players some good in that they'll know where they need to adjust and how they can improve on their game.

It wasn't a complete "bust of a game," as some would say, but it wasn't all that pretty either. I guess we can say, welcome to the preseason?

BLOG A BULL: FROM THE BULLS PERSPECTIVE