The Memphis Grizzlies defeated the Atlanta Hawks, 110-102, in a much better showing in their third preseason game.

Share All sharing options for: Grizzlies top Hawks in preseason game No. 3, 110-102

It was nice to see Mike Conley draining threes for the Grizzlies tonight, hitting all five of his attempts. Hey, we're not asking for much, but how about just making two of them per game, Conley, at about 40 percent from beyond the arc? Please?

The Grizzlies shot an impressive 10-of-21 from the three-point line, making it one of their better performances in, oh, years. Wayne Ellington hit two, Quicny Pondexter hit two and Rudy Gay added one. Unfortunately, Jerryd Bayless missed all three of his attempts, but he did look much, much better running the offense, dishing seven dimes and turning the ball over twice in 27 minutes. A much improved performance by Bayless.

In all, the Grizzlies looked good, specifically Conley and Zach Randolph who was up to his old tricks, posting a highly efficient 14 and 10 in 32 minutes. Man, I hope Randolph is all the way back... please let him be all the way back! 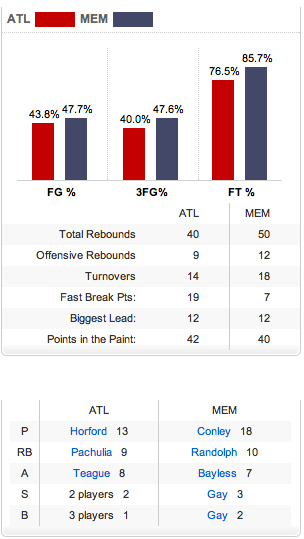 Our very own Kevin Lipe was at the game and is going to write a kick-ass round-up in the morning, giving us his insight on how the team looked, so keep an eye out for that.

FOR MORE ON THE HAWKS: Peachtree Hoops