Grizzlies vs. Rockets: Jeremy Lin leads Houston to a 109-102 victory

The Grizzlies went into Houston and lost to the Rockets, 109-102, in their third preseason matchup of the year.

Share All sharing options for: Grizzlies vs. Rockets: Jeremy Lin leads Houston to a 109-102 victory

Tonight the Memphis Grizzlies went into Houston to take on Jeremy Lin and the Rockets, and, well, went down by 63 points at one point (!!) and saw Toney Douglas drop 44 points on 3-of-6 shooting!! Wow, what a game!

Or, actually, none of that happened. What a scoring mess.

Still, jokes aside, the Grizzlies lost to the Rockets in a game where we had no Tony Allen (rest), but saw the preseason debut of Josh Selby, with Wayne Ellington getting the start at shooting guard.

We'll have a more comprehensive breakdown, but until then, enjoy the amazingly inaccurate graphic! 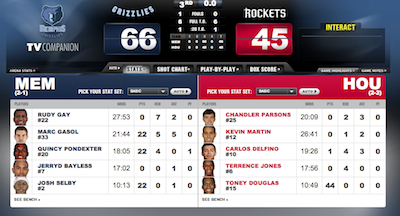 In the end, Memphis fell 109-102, unable to overcome a late deficit and make stops when they needed to. They will take on the Milwaukee Bucks on Thursday night.

The Grizzlies are now 2-2 on the preseason.

For more on the Rockets, see: The Dream Shake