Josh Selby made his preseason debut last night against the Rockets

Grizzlies fans tuned in to last night's preseason game as Josh Selby made his debut against the Rockets.

Share All sharing options for: Josh Selby made his preseason debut last night against the Rockets

In a 109-102 loss to the Houston Rockets last night, what seemed to get lost among the 67-4 score, the Toney Douglas phantom 44-point game and the 5-minute buzzer, was the long-awaited preseason debut of second-year player Josh Selby.

Now, if you asked most Grizzlies fans at the end of last season what their expectations for the D-League'd Selby would be heading into the 2012-13 season, I'm sure most of them would say something like, "I'd just like to see him show signs of life" -- or something to that effect. However, after his 3-point-raining performance in this year's Las Vegas Summer League, in which he earned co-MVP honors, coupled with the departure of O.J. Mayo, fans are hoping that Selby can step in and act as the much-needed sharp-shooter they've been longing for. "Please, help us stretch the floor!"

Last night, Selby made his debut against the Rockets and did exactly what we wanted him to do; he hit three-pointers. He hit three of them, in fact, going 3-of-5 from beyond the arc on his way to scoring 11 points in just under 17 minutes. Now, that is exactly what we need Selby to do. As for the rest of his game, sure, he didn't do much else. He wasn't great on defense, nor did he distribute the basketball. But, again, we're already a strong defensive team and we can afford to cheat a little when Selby is on the court, simply because we need him to be a near top-tier shooter.

Mike Conley is also showing great range this preseason, hitting another couple of threes (2-of-4) on his way to scoring a team-high 18 points in 22 minutes. Ellington, however, missed both of his attempts while Jerryd Bayless didn't take any.

Another interesting note, Marc Gasol had 7 dimes, or nearly half (18) of our team's assists. We'll continue to see one of the game's best passing bigs be used as a high-low weapon. I'm really excited about this development, especially with a healthy Zach Randolph and a cutting Rudy Gay.

While the Grizzlies lost last night to a Rockets team that will likely spend most of the season "in the struggle," I think the best way to sum up what the Grizzlies are going through right now was nailed by a Matt Moore tweet after last night's game:

Grizzlies I feel like are just done with preseason in general. 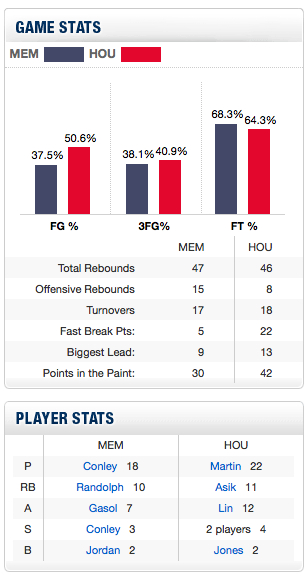 More on the Rockets: The Dream Shake