In case you weren't actually at the FedEx Forum tonight, well then you probably didn't know the Memphis Grizzlies beat Real Madrid, 105-93, in their non-televised first game of the 2012-13 preseason. Awesome job, all involved, in not getting the game streamed on NBA.com -- at the very least.

Anyway, the Grizzlies did beat Real Madrid, as expected, and actually had some nice moments. Again, this was a preseason game and naturally we're not going to make a big deal about them beating a team lead by Rudy Fernandez, but it was nice to see certain sets and see the Grizzlies shoot a highly efficient 56 percent from the floor, while still not quite figuring out this whole 3-point shooting thing (4-of-10 from downtown).

Neither Tony Wroten or Josh Selby played in this one, so there were some Jerryd Bayless-Mike Conley sets, which is interesting. Wayne Ellington played 7-plus minutes, took two shots and only hit one of them. Really, the big stories came via our starters.

Rudy Gay lead the team with 27 points, while Marc Gasol had 16 and 16. One of my favorite stats, though, was seeing both Gasol and Zach Randolph picking up 6 assists each. Meaning, some nice high-post, low-post plays and a few dish and cuts in the post. Basically, getting Gasol and Randolph involved in finding cutters and passing out of doubles is going to be a huge plus for us this season. I still believe that Gasol is our second best passer, for what it's worth.

Here's a nice snapshot from NBA.com: 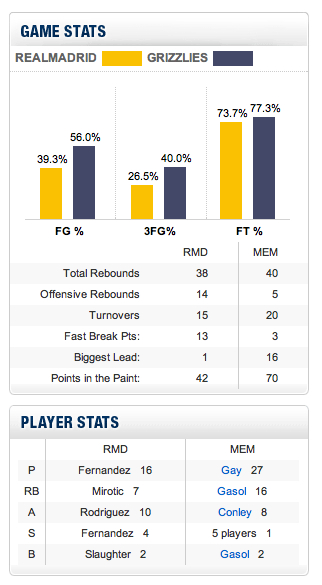 I know that Chris Herrington was at the game, he had some great tweets last night. I look forward to his writeup, and we'll make sure to post the link here as well.

In all, the Grizzlies won, but more importantly... BASKETBALL IS BACK!