Las Vegas has set the over/under win totals for the 2012-13 NBA season, and currently the Memphis Grizzlies are at 48.5 wins.

For those of you who are into, you know, betting on sports, the Las Vegas odds-makers have released their over/under wins totals for the 2012-13 season. It's interesting to see that they've taken a bit of a stand on the Denver Nuggets, placing them as the 4th best team out West.

As for the Grizzlies, they are right there, tied with the Los Angeles Clippers for 5th in the West with a win total of 48.5. 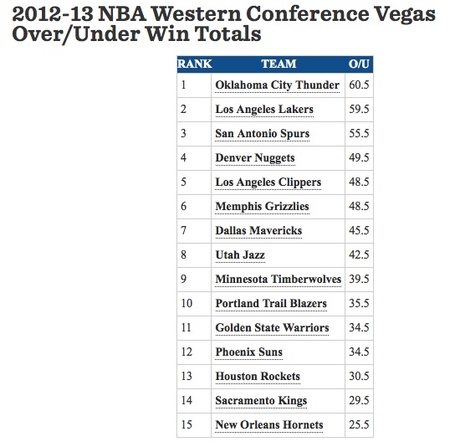 I'm going over here. I think we're really set up this season to top 50 wins. Yes, we haven't won north of 48 games since the 2005-06 season, but that doesn't count the fact that we're coming off a season in which we posted a franchise-best .621 winning percentage and we're, at least in my mind, a better team heading into this season than we were last year.

I think it's reasonable to believe that we can win 52 games. And that just means... nothing, other than I'm a certified "homer." Seriously, though, we would have paced to win 53 games last year. Why can't we at the very least come close to that win total this season? Does the loss of O.J. Mayo really drop us 4-plus games?!

No, of course not.

And please don't let this post endorse betting the over. But if you do bet the over, and you win... I'm kidding!

Big ups to Brew Hoop for the table. They're the best!