Memphis came to Charlotte seeking an 8th straight win: and they got it.

Recap from the Opponent's point of view, in which the writer refers to the Grizzlies as "experienced"

Because I'm currently not too close to Memphis, the chance to see my Grizz play live is rare. The opportunity shows his face, though, every time the Grizzlies come to Charlotte. Charlotte's a three hour drive from my location of Blacksburg, VA - I always try to take the chance to go see them.

I came into the stadium tonight expecting a win - the way the Grizzlies have been playing (especially after big wins against Miami, OKC, and New York), there's not a chance the Charlotte Bobcats could take us out. I'm sorry, Charlotte fans - I don't mean for you to take that personally.

However, through my 7 years of being a Memphis Grizzlies fan, there was the small whisper in the back of my mind:

"We would be the type of team to lose a game like this."

There were times the Cats made it interesting, but all in all, the Grizzlies continued their season-streak of proving me wrong and blew me outta the water. I walked into the stadium feeling like hot stuff, and by goodness - I left feeling that way too.

Charlotte is always a weird city to visit. Charlotte, is of course, a city - but for some reason, it doesn't quite have that "urban feel" one would expect from visiting a place of her size. I've never been to Charlotte in the day time (the only reason I have come is sporting events). Because of this, my inner-geek takes over and I make the connection of Charlotte to Gotham that I can never quite shake.

Then, there are Bobcats fans. Who are they? It's a fan base I still can't quite figure out. I'm sure there are striking similarities to the mood and vibe basketball fans in Charlotte now as there were in Memphis when the Grizzlies first moved in from Vancouver. Charlotte is a team that is trying to build and become relevant - before the relevance comes, we get these guys (and yes, I took this picture): 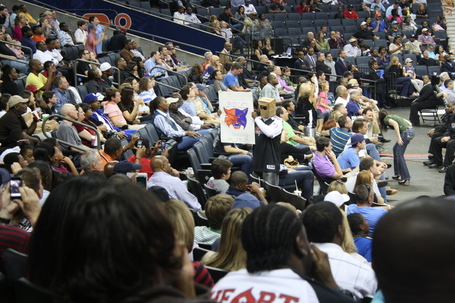 You can't help but feel sorry for them there. Each time I stood up and cheered for the Grizzlies, I have to admit - part of me felt bad. I didn't want to be the fan of the hottest team in the NBA right now cheering for a domination of the Charlotte Bobcats.

But I was. Such is sports.

Things didn't start too well. Tony Allen begun by doing his thing and missing two of his infamous wide-open layups. I still haven't quite figured out - do we as Grizzlies fans grow angry, or smile out of pitiful love, merely because it happens?

If I recall correctly, TA got a bit of a push from his teammate Marc Gasol last season when Marc Gasol instituted a rule in the locker room where Tony Allen had to pay everybody on the team $100 for each wide-open layup he missed. Two minutes into the game last night, he owed the team $200.

The game quickly turned around, though, and at the end of the first quarter the Grizzlies were doing their thing and dominating the turnover battle 6-2 and ended the night forcing 18 turnovers.

The other thing I quickly noticed - the Grizzlies looked exhausted. It's not that I wasn't seeing hustle from them, it's just I didn't see visible emotional energy. I could tell in the faces it was a long night at the end of a long week. As I thought about it, no doubt they were tired: Friday's nationally televised game against the Knicks ended late and the Grizzlies didn't land in Charlotte until early Saturday morning. What a weekend.

Each time I've seen the Grizzlies play in Charlotte, Mike Conley is absolutely dominant - I'd be interested to see the matchup history between him and Kemba Walker at point guard (anybody want to share some numbers in the comments below?). Last night was no different, as Mike led the team and scored 20.

Zach Randolph was right behind him with 18 points and 12 rebounds. The team just keeps on impressing - three other players scored in double figures: Rudy Gay had 16 points, Marc Gasol and Tony Allen each scored 12. Conley remarked on this trend.

"I think these last two games have really distinguished what kind of personality this team has right now," Conley said. "We're really playing together as a team."

Towards the end of the game, I hate to admit: I got a bit scared. The Bobcats came back from a 17-point deficit as Kemba Walker scored 11 consecutive points in 3.5 minutes to get the Cats within 6 with 6:54 left in regulation. The Time Warner Cable area got loud. Very loud. Luckily, the officials called a timeout and the Jumbotron took over with a crowd contest dance-off (if only Charlotte basketball was as good as the city's dancing - one of the best jumbotron experiences I've witnessed). I felt fans get pretty distracted by this and, consequently, had a hard time getting back into basketball to back Kemba the last bit of the fourth. Basketball is a momentum sport - no doubt this played a negative role.

Ramon Sessions poked in two layups and Michael Kidd-Gilchrist (who Charlotte fans are loving right now, by the way - I feel happy for the guy. They're really welcoming him in) hit a jumper to bring the lead to 88-83 with 47 seconds remaining. The Cats pulled within 5 two more times, but our time-management and free-throw shooting took over, preventing any efforts from the Bobcats.

It's always a pleasure coming to Charlotte and seeing our guys play.

Sit and Soak this in for a Second

Guys, can you believe this right now? The Grizzlies are 8-1 and have won 8 in a row. Eight. Three of the last four wins have come against Miami, OKC, and New York. Marc Gasol is arguably the best player in the league right now. The Grizzlies, whether or not ESPN decides to admit it, are statistically and numerically the best team in the entire NBA. I have a hard time not seeing Memphis rise to the top of the power rankings after this weekend and start to put themselves in the conversation of winning a NBA title.

Yeah, that's our Memphis Grizzlies. The team that has fought back from injuries and offensive deficiency to stand at the top of the league right now, on November 18, 2012.

According to Paul Flannery over at SBNation's front desk, we're for real.

Gotta admit - I agree with him. In the words of our very own Kevin Lipe, "It's a good time to be a Grizzlies fan."

Our next five are: Denver, Lakers, Cleveland, Toronto, and Detroit. All five games are at home, and I don't see why we can't extend our home winning-streak to 20 games to end November at 13-1.

To see more photos I took at the game (was able to hop on the court for a bit to take close photos, including the main article photo), click HERE. Also, gonna say it because I got to - thanks to my friend Ross Johnson for lending me the camera.