The Grizzlies just didn't have the hustle tonight, as the Nuggets dominated them off the glass and in the turnover battle.

Share All sharing options for: Final Score: Nuggets top Grizzlies, 97-92; Oh, so this is losing?

With the Grizzlies snapping their 8-game winning streak, losing to the Nuggets 97-92, there's one stat in particular that stands out:

21 offensive rebounds for the Nuggets.

Let this be clear, this game wasn't a letdown. I mean, yes, the Grizzlies should have won it, but I wrote earlier in the day that the Nuggets were due for a big road win, and that they have the ability to out-hustle any team out of the gym. And as we saw tonight, they did just that. With 21 offensive rebounds, a +14 on the glass, and an even 17-17 in what should have been a win for the Grizzlies in the turnover battle, and what we were left with was a 5-point lose for the Griz.

Credit Denver for completely taking both Zach Randolph and Marc Gasol out of the game in the second half. A lot of it had to do with the personnel the Nuggets were running out there, playing small-ball with Kenneth Faried at center. It made things much tougher for Gasol and Randolph to play their game.

Also, big ups to JaVale McGee who was super active on both side of the ball. He had the Grizzlies frustrated on the defensive end and worked his way to 15 points on 7-of-12 shooting.

For the Grizzlies, Rudy Gay played well offensively, scoring a team-high 22 points on 8-of-13 shooting, but he managed just three rebounds in 34 minutes, and didn't grab a single board in the first half.

The Nuggets had a +11 advantage in free throws as well, with some questionable calls by the officiating crew. Now, if you read this blog you know that I never complain about officiating. And I won't start now, but...

Marc Gasol got called on this foul, where McGee grabbed his jersey: 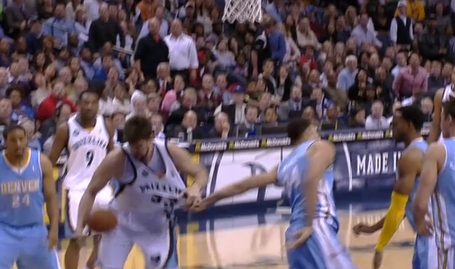 Again, we can make excuses and say that the Grizzlies needed a bit of a breather after the week they just had, no excuses, man. They were out-hustled big time.

I expect them to be ready on Friday when they take on the Lakers.

For more on the Nuggets: Denver Stiffs