Share All sharing options for: How Losing Quincy Pondexter Affects The Grizzlies

Editor's note: Trisity Miller has already contributed a couple of pieces to the blog (here and here), but we're going to make it official. Give her a big ol' SOV welcome.

Let's take a look at how Quincy Pondexter's MCL injury will affect this team and whether they should replace him in-house or via free agency.

I guess a sigh of relief is okay for #GrizzNation. What looked to be a year-ending knee injury after Wayne Ellington ran into Quincy Pondexter’s leg has been revealed to be a Grade 2 MCL sprain. With the MCL sprain, it’s sad that Pondexter will likely be out a month, but last season Zach Randolph’s MCL sprain was a Grade 2 and that kept him out for majority of the second half of the 2011-12 season. Hopefully Q’s age will help him recover quickly.

Since the season’s started, Q has been this teams’ best player off the bench. After having a minimal impact last season, he’s adapted to his new role nicely. Here are some numbers that show what Quincy’s impact on the team:

Here's his shot chart so far in the season. 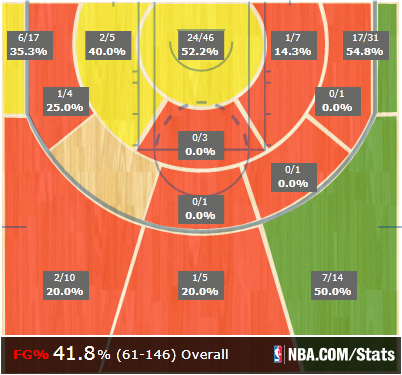 Of course numbers don’t tell the whole story. Pondexter has been the only player that allows the team to give Rudy Gay significant rest while not losing much on the court. And while the defensive numbers don’t support him, he provides a solid defensive presence when playing alongside Rudy and Tony Allen.

But his real impact has come from the arc. It’s surprising to say the least. Coming into the season, Q was a career 33% 3-point shooter and had made a combined 40 3s his first two seasons in the NBA. This year he’s at 42% and has already made 33 three’s this season.

Outside of Darrell Arthur, who’s been fighting injuries, he’s easily been the most consistent man coming off the bench. He’s been on the end of several hockey assists, a tribute to how his shooting has evolved this opposite a step further. Off the pick-and-roll, especially when Marc Gasol is involved, he’s often the target on the wing or corner when the defense looks inside due to the heavy post presence.

Here’s the tough part. For a team that’s already light on small forwards, they will have to make some adjustments to make up for Quincy’s presence.

The first thought from many would be playing Rudy Gay more, yet he’s already playing a team-high 36 minutes per game.

Last night, Lionel Hollins made a daring move by putting Darrell Arthur at the 3 and you have to wonder if we will see more of that. While Arthur isn’t going to be hitting a ton of threes anytime soon, he can hit the 15-footer and post-up similar to the way Rudy does within the offense. He also withholds the foot speed to guard reserve forwards. I can’t imagine him matching up with a Kevin Durant or Carmelo Anthony, but against others he stands a good chance.

The biggest surprise would be bringing in Tony Wroten to provide size on the floor. In 8 games playing for the Reno Bighorns, the Grizzlies D-League affiliate, he’s averaged 13.6 points and 3.8 assists a game. He isn’t the shooter Quincy is, but his raw play-making abilities make him interesting especially if given the chance to play alongside Mike Conley, Gasol, etc. This is the unlikeliest solution, as Hollins isn’t too big on playing younger players (paging Josh Selby).

Another option is whether the team will be willing to dip into the free agency pool and find a player, most likely a veteran, to play at least 10-15 minutes a game and attempt to replicate what Pondexter has done this year. On January 5th, teams will be able to begin giving out 10-day contracts, but only one player really comes to mind as I don't see this organization stepping out as they're a very fiscally-minded group: Josh Childress.

While Josh doesn’t provide the outside threat this team desperately needs, he’s athletic enough to provide Rudy 10-15 minutes of rest per game. Recently, Childress was waived by the Brooklyn Nets due to a personal request, so he would be able to come straight in without having to work off rust. He isn’t the player we once saw in Atlanta a couple years back and his been on a "decline" since returning from overseas, but his length could help defensively on the perimeter.

One thing to look out for is a trade similar to last year's acquisition in Marreese Speights after Darrell Arthur went down. While the big 4 won't be getting moved anytime soon, I wouldn't be shocked to see second year guard Josh Selby dangled in trade talks to bring in a small forward.

It's doubtful that anything will be done in Memphis anytime soon. It would be simple overreacting, but if the bench begins to struggle, then around the 5th of next year a move might be made. There's a chance that the "Zoo Crew" will pick up their play and not need anything done, but Pondexter's presence will be missed regardless. It's up to the rest to make us not notice.