This Week in 'Shooters Who Can't Shoot': That You, Wayne Ellington?

Share All sharing options for: This Week in 'Shooters Who Can't Shoot': That You, Wayne Ellington?

When you hit seven three-pointers in a game against the defending champs, fans, writers and anyone else who’s paying attention is going to expect you to be a constant threat outside the arch.

Martin Knezevic, here at Straight Outta Vancouver, wrote how Wayne Ellington could be the potential "replacement" to Tony Allen in the starting 2-guard position due to his ability to spread the floor and open up the lane for Marc Gasol and Zach Randolph.

Opposing defenses have been able to help off of Tony the past few seasons, the only way of neutralizing Randolph and Gasol inside. Wayne doesn’t have to make 7 threes like he did vs Miami recently, he just needs to be there to help space the floor and keep defenses honest.

Sorry, but in Wayne Ellington’s case you can’t spread the floor when you’re a shooter who "can’t shoot".

According to NBA Stats, the Grizzlies scoring improves and the defense does also when Allen is on the floor. Yes, I know that’s kind of weird considering Allen isn’t much of a shooter, but I’d assume it has a lot to do with the transition points he creates due to his defense and him cutting while others post-up or spot-up.

Basically if anyone is going to replace TA in the starting lineup it’s going to have to be a definitive shooter who can defend on the other side. Wayne Ellington, though known as a 3-point shooter coming out of the University North Carolina, hasn’t been much of that in his career. In his first two seasons as a member of the Minnesota Timberwolves things started off good from behind the arc, especially his sophomore season. His first two seasons he shot 40% from three. Synergy Sports has Ellington hitting 43% of his spot-up 3s and 48% overall from spot-up situations in 2010-11.

In the Memphis offense where the primary focus is post play or either Gasol or Conley finding the open shooter, that 43% would be huge for this team. Instead his numbers have been on a free-fall since 2010-11. Last year Wayne shot 39% in spot-up situations (39.6% overall). This year it’s at 27% (22% overall), which is a career-low.

For perspective, here are some numbers for spot-up three-point percentage from other shooting guards around the league:

Those numbers make Ellington’s 27% seem abysmal. There is room for improvement for his shot and what he can do overall as a player to help the Grizz out.

Derek James of Howlin TWolf spoke with me and offered a little optimism for Ellington in the coming months for fans wanting Wayne to pick his shooting up as the season plays on.

"He’s earned a reputation as a shooter, and it’s mostly warranted. The month-to-month splits back this up, but throughout his career Wayne’s three point percentages have started off in the low-thirties in the early months of the season, peaked in the forties during the mid-months, before regressing a bit towards his early season efficiency."

If you want to look more of an in-depth analysis at Wayne Ellington as a player, here’s a post Derek wrote in 2011.

In a Commercial Appeal post, Ron Tillery spoke with Conley who gave a little insight on where he thinks some of Wayne’s shooting troubles are coming from.

Really, he might be thinking a little too much," point guard Mike Conley said. "A lot of teams put him on the radar as a knockdown shooter after that Miami game. Guys are closing out to him hard. He’s caught between whether to shoot or make a play for somebody. He just needs to stay loose and let it go."

Based on the tapes, that’s a solid statement. Instead of shooting 3s, he attacks when the defenders close out hard. Jumpers off the dribble aren’t one of his strengths and his confidence may be the blame for why he continues to take them.

Here’s an example of Ellington’s "thinking too much" in the Detroit Pistons game. As Conley runs a pick’n'roll, he gets the ball to Marc Gasol at the free-throw line which causes Ellington’s man, Jonas Jerekbo, to step in and focus on Randolph as Maxiell has to step up to defend Marc. This set-up leaves Ellington wide open in the corner. 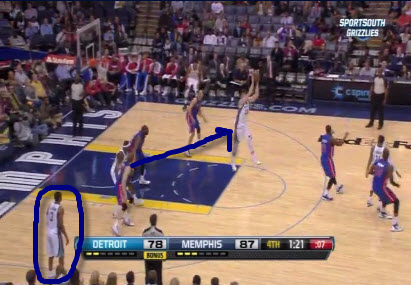 Of course Marc hits him in the corner which has him in position to shoot the corner 'J' with his feet set. 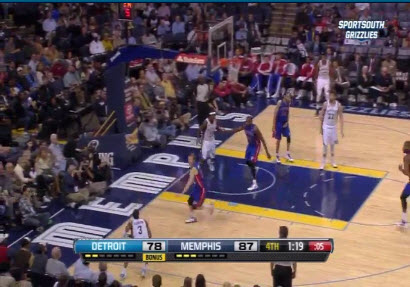 The result? A missed pull-up jumper. This is something he’s done from time to time since he’s been in the slump. It’d really help himself and the team if he shot the higher percentage jumper. It looks as if he never planned on taking the shot know the defender was going to close out hard.

I asked Zach Harper of A Wolf Among Wolves as he’s covered Wayne Ellington for the bulk of his career and in regards to Wayne as a shooter and some of his tendencies, he confirms what was said above.

"Offensively, Wayne is best when he’s a direct decision-maker. If he’s taking more than two dribbles before a shot, he’s not really effective. As a shooter, you want him deciding to shoot before he even gets the pass. That seems to be when he’s at his best as a 3-point shooter."

Derek James’ statements also spoke along the same lines as Harper’s. "…Therefore, if his shot isn’t falling from outside, he’s not going to create off of the dribble very often, nor do you want him to."

For everyone watching, what it really comes down to is being comfortable that Wayne Ellington isn’t a Ray Allen, Steve Novak or Klay Thompson. Wayne says that he will "continue to shoot the ball" which, if you’ve played basketball, is the number one way to get out of his slump. But for all the fans that are hoping for Wayne to become some fantastic super-shooter, we may just have to realize that Ellington may belong in the "shooters that can’t shoot category". Hopefully he proves me wrong throughout the season.