Share All sharing options for: Memphis Grizzlies Reset: Welcome To The All-Star Break

Well, we made it to the All-Star break, relatively unscathed. Sure, we lost our anchor, Zach Randolph, for a long spell, but that did allow time for us to establish a new one in Marc Gasol, our All-Star. (How awesome does that sound, by the way?)

At this point, thinking back to when Randolph went down, we were all hoping to hit the break above water. Which, essentially meant at .500 and in the playoff hunt. Here we sit, though, at 19-15, 4.5 games behind the San Antonio Spurs for first place in the division. Hard to complain about our status, especially when you consider we've posted a plus-record without Randolph. 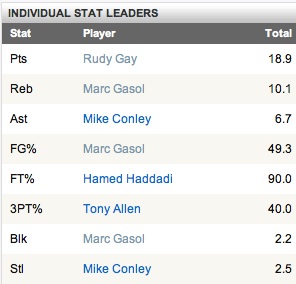 The questions now remain, what will we look like when Randolph returns, and how will the likes of Gasol, Rudy Gay and company respond to adding a high-usage, high-volume scorer like Randolph? Personally, I think those "concerns" are more discussion points than actual concerns. It's in our nature to want to speculate on such things, but I for one only see us opening up, offensively speaking, even more so when Randolph returns.

Think of it this way: how many times have we begged for someone to help us, at the very least, trade baskets with the likes of the Oklahoma City Thunder or the Los Angeles Clippers late in games? When we're putting the offense in the hands of a skittish Rudy Gay at the closing moments, or we're asking guys like Dante Cunningham or Tony Allen to get close-out buckets. In these instances, who wouldn't love to let Randolph create? I for one would.

Our problem hasn't been running with the likes of the 76ers or the Pistons, etc. We've struggled in keeping pace with teams who can flat-out score. This is where we need Randolph. That is, if we want to be less of a playoff contender and more of a title contender.

I think there's definitely reason for us to be optimistic about the second-half of the season. We're getting our "best player" back, hopefully in good health. Sure there'll be a transition period, but that's only natural when you try and integrate a superstar into a mix that's already seemingly worked quiet well. But, where we stand right now, I have to say that the optimism is running high from where I sit.