Share All sharing options for: Another Great Grooming Moment in Memphis Grizzlies History 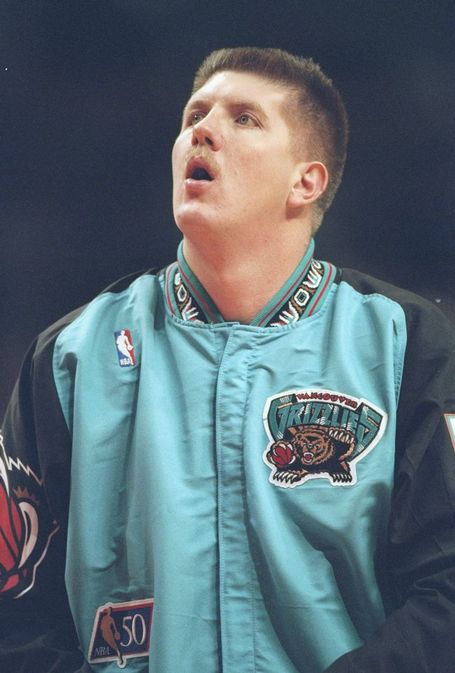 Earlier in the week we brought you some of the greatest moments in Memphis Grizzlies grooming history, with Tony Allen, of course, bringing the heat. However, we did leave off one of the great groomers in this franchise's history: Mr. Bryant Reeves!

How could we forget? Sure, he was a somewhat of a bust, out of the league by time he was 27 years old, but, c'mon, he not only made the "fat guy flat-top" look his own, but he even wore a little dirt 'stache from time to time. How precious.

Granted, he also only ever played two preseason games as a member of the Memphis Grizzlies, which doesn't disqualify him by any means, but it just doesn't seem so familiar to many Memphis fans having the "Big Country" around. His weight and his back became such major issues for Reeves that he couldn't sustain the grind of being an NBA player. Which, again, doesn't fit well into our current make-up of Grit 'N Grind. Really, Reeves never did either. His 'stache was a bit gritty, but he himself never really was. I don't want to knock the guy, but he really was Eddy Curry before Eddy Curry was Eddy Curry. Plenty of natural talent, good size, but just not capable (see: lazy?) of keeping himself in game shape. Unfortunately.

Still, Reeves, for what it's worth, you could argue was the second best center in Grizzlies history (assuming, of course, you call Pau Gasol a true power forward). Read that again and let me know how it sounds...

So, we applaud you and your wonderful grooming techniques, Mr. Reeves. For a guy who let his physique "go," you certainly made sure your hair never got too hefty!