We’ve seen this script before. This year’s last-second wins against the Nuggets and Warriors were the model for last night’s horrific collapse and gut-punch loss to the Los Angeles Clippers in Game 1 of the first round. Those earlier games saw the Grizzlies run out to big leads the first half, only to see those leads slowly evaporate over the second, until a last-minute isolation shot from Rudy Gay led to somebody (Tony Allen in one, Dante Cunningham in the other) winning the game with a putback.

There was no one to save the Grizzlies last night. Everything fell apart.

With eight minutes left in the game, the Grizzlies led by 24 points, 95–71. What followed were eight minutes of poor execution on the offensive end, coupled with a complete lack of defense on the other end, allowing the Clippers to go on a ridiculous 28–4 run to finish (and win) the game. At one point Nick Young scored nine points in one minute, seemingly running the same play three times in a row, while Tony Allen sat the bench for most of that quarter even though he wasn’t in foul trouble.

The Grizzlies lost because they got so far ahead they quit doing the things that got them home court advantage in the first place, and by the time they realized their huge lead had evaporated, it was too late to fix the problems, too late to stop the bleeding. For the whole fourth quarter – after a terrific third that saw Mike Conley hit four of his five three-pointers – the Grizzlies appeared to be trying to milk the clock, waiting until late in the shot clock to fire off a jumper or pass to Zach Randolph in the post, who was clearly having trouble with the size of Reggie Evans. Blake Griffin was sitting with four fouls by that point, having been mostly neutralized.

Marc Gasol’s last shot attempt came with 10:12 remaining… in the third quarter. OJ Mayo, in between hitting threes (the team shot a mind-blowing 68% from beyond the arc), was making ill-timed or just flat-out bad passes. Rudy Gay, so good on both ends of the floor through the first three quarters, started playing hero ball, ending up in lots of iso situations. Everything that had frustrated Chris Paul and the Clippers all night defensively stopped working, either due to adjustments by the Clippers or the inability of the Grizzlies to keep that kind of pressure going for 48 minutes instead of 40. The offense didn’t sputter – it died at a railroad crossing and was obliterated by an oncoming train. The Grizzlies scored 13 points in the fourth quarter to the Clippers’ 35.

Via NBA.com, here's the Grizzlies' shot chart for the last 9 minutes of the game: 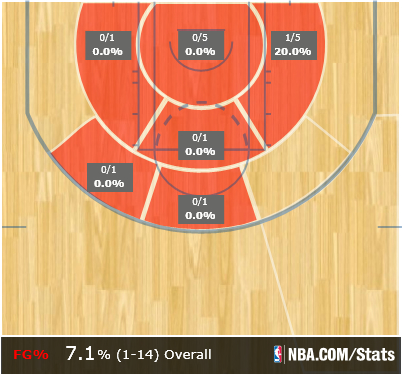 Look at that percentage. There is no way to win a playoff game against a good team when you shoot 7.1% for the last nine minutes of a basketball game.

By the end of it, no one in the FedExForum could believe what they’d witnessed. The building felt nervous, tense, like everyone was scared this was going to happen.

The question, of course, is not whether the Grizzlies can win this series from a basketball standpoint. Obviously they can – they were eight minutes away from handing the Clippers an embarrassing blowout loss. Caron Butler fractured his left hand in the second half, after defending Rudy Gay very closely in the first, a loss that hurts the Clippers’ options on both ends of the floor. Nick Young is not always going to hit three three’s in a minute, and Lionel Hollins is not going to let Tony Allen sit that long when a lead starts shrinking.

The question, then, is whether the Grizzlies can manage to recover from this gut punch. This is a tough bunch of dudes, all of them, and no team plays with more heart (as we saw in the first half of last night’s game). But last night was the kind of collapse that can shake a team to its core, when a game that everyone assumes is over slips out of the teams’ hands before they can even get a grip on what’s happening. Everything went poorly.

The good news is this team is stacked with players who are defined by their intensity. The bad news is now they’re playing from behind in a series that was already so evenly matched that the Grizzlies needed to hold as tightly as they could home court advantage. The other good news is that everything that went wrong last night can be fixed, from an X’s and O’s standpoint. The Chris Paul / Eric Bledsoe backcourt, in particular, gave the Grizzlies fits. Nick Young will never again be allowed so many open 3’s in the fourth quarter.

The other good news is that after a loss like last night, it can’t really get any worse. This series was widely predicted to end up with the Grizz winning in 7 or the Clippers winning in 6. That still appears to be where we’re headed. The team’s going to have to steal one in LA to even things up. But this is a team that’s been in a game 7 before, and this time, it’ll be in Memphis.

I’m still numb to what happened last night – I can’t fully believe that I witnessed that monumental collapse. I can only imagine what the Grizzlies players are feeling today. Going forward, this team is going to have to play tougher, play harder, and play smarter, and not abandon their offensive sets that early in a game, no matter how big the lead. This is the playoffs. Chris Paul has been dishing out vomit-inducing lessons like last night since he came into the league. Anyone who thought we were going to blow the Clippers out four games in a row was on drugs. Now it looks like it’s going to be an uphill battle, a slog through six or seven games of physical, gut-it-out basketball. It’s exactly what the Grizzlies have claimed to want all season. We’ll find out soon if they meant it.