Share All sharing options for: Chris Wallace Finishes 9th in 2012 NBA Executive of the Year Voting 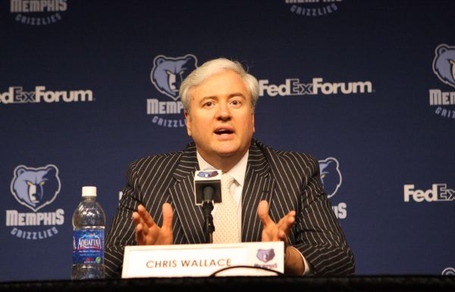 I know we've done our best to make the case for Chris Wallace as the 2012 NBA Executive of the Year, but, unfortunately today we learned that he not only didn't win the award, he finished 9th overall in voting. Now, I actually went on record and voted for Larry Bird in our SB Nation end of the season awards piece, and seeing as Bird took home the award I'm not all that shocked in his winning, but really I think it's safe to say that Wallace probably deserved to finish better than 9th, just one vote ahead of David Kahn. I mean, seriously.

Again, congratulations to Larry Bird, who I think deserved the award, but little respect for Wallace who did a fantastic job at making the necessary moves for a Grizzlies team that ultimately turned in its best winning percentage in franchise history.