Was The 2012 NBA Draft Lottery Rigged? A Soldier of Misfortune Investigates

Share All sharing options for: Was The 2012 NBA Draft Lottery Rigged? A Soldier of Misfortune Investigates

Last night I was given the great privilege to attend the NBA Draft Lottery in the heart of New York City. The event itself was magical. There was plenty of swag in attendance, enough money in one room to sign the entire city of New York to a 10-day contract (yet we couldn't get any Pellegrino up in this bitch?), and bow ties for miles. It was, yes, a wonderful evening.

Initially, as a "soldier of misfortune," in attendance as a Grizzlies blogger with little to no agenda (except to continue my streak of free meals...), I really had no rooting interest in final outcome of the lottery. Though I was secretly hoping for three scenarios to happen.

One, I would have liked to see Kyrie Irving play alongside Anthony Davis for the next six years, in their pre-Miami Heat days, of course.

Two, I wanted to see Brooklyn Nets representative Irina Pavlova refuse anything but the top pick - "Try again, Mr. Stern... until you get it right. (slow drag, smoke alarms, the whole nine yards)"

Thirdly, I wanted to see the top pick go to the New Orleans Hornets if only to hear the many cries of conspiracy theorists calling for Stern's head. I mean, right, what are the odds that the team with the 4th best odds (pretty much tied with Cleveland for third, but the Cavs won the coin toss -- meaning, the Cavs had one more ball than the Hornets) would "jump" up and grab the top pick? I mean... in 2009 Chicago went from 9th to 1st, while in 2012 the Wizards went from 5th to 1st, and, right, in 2007 the Trail Blazers went from 6th to 1st... I mean, other than that, the team with the best odds usually never wins... Oh, right...

That said, as someone who was there (not in the room when the balls were selected), I have no doubt that this thing wasn't rigged. I did speak with a few people who were in fact in the room, people who are trusted members of the media, and I have to believe that what they saw was an actual... Wait, unless of course... no, cyborgs aren't real, right? At least not yet they aren't. And did I mention that I did get to touch the "No. 1" envelope? It wasn't frozen. If anything, it was uncomfortably warm.

Here's a brilliant and thorough take as to what happened in that room.

It was difficult to get a word in with Monty Williams, especially after the lottery. Before the lottery, I think I saw him for a brief second, but he seemed to have retreated, probably because no one wanted to talk to him -- pre-lottery it was all about who or what you were wearing, and no bow tie meant not interested. After the lottery, though, man it was like as if he turned into that not-so-attractive girl you never really wanted to talk to until you found out how much money her father had and that he might be able to get you a job as a high-paying bikini inspector. You just couldn't get near him.

I did, however, get this photo: 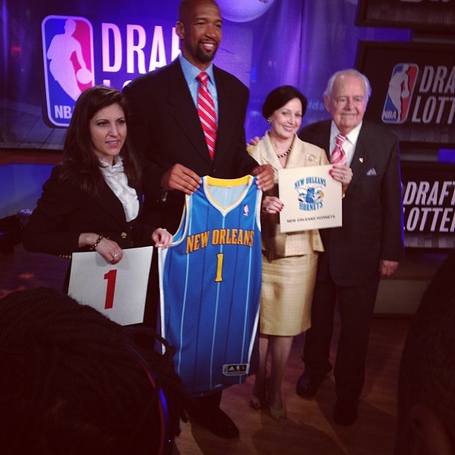 Shouts to Rohan and crew!

Really, I have no beef with the happenings at the draft. I do think that Bernie Kosar should have worn a blazer, but... 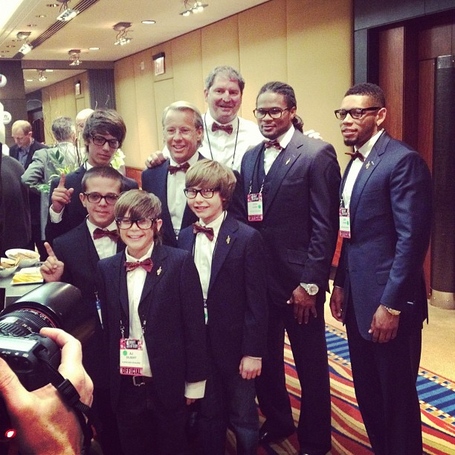 I caught up, TMZ-style, with the ping-pong ball machine after the draft on the streets of New York. I knew this was my chance to get the evidence we all needed to put this conspiracy to rest.

Here is the transcript of our discussion.

Me: Hey man, so tell us, was the lottery rigged? 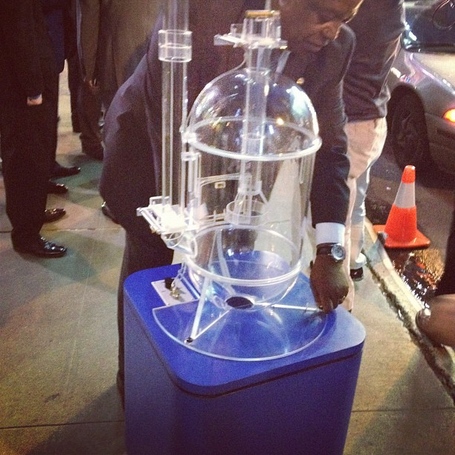 Back to the grind to find more proof. But until then, big ups to the New Orleans Hornets and their fans for landing Anthony Davis. I mean, the fun thing about all of this that we would have also cried conspiracy had the Cavaliers won the pick -- ah, this makes up for "The Decision" -- or if the Brooklyn Nets would have won it -- a franchise with a new home in need of a franchise player -- or if the Memphis Grizzlies would have won it -- how the heck did a team not in the lottery win it?!

So, can we please enjoy the moment, enjoy the upcoming draft and start bitching about the more important things happening in the NBA -- the terrible no-calls from the refs!!!!