The SOV Dialogues: The Grizzlies Offense

Share All sharing options for: The SOV Dialogues: The Grizzlies Offense

As a part of our ongoing series of dialogues inspired by a mutual love of FreeDarko, Kevin and I will be discussing the most glaring weakness of the 2011-2012: our offense.

Scott: Although Memphis posted its best regular season in franchise history, the offense was severely lacking. Granted, it was never going to be as aesthetically pleasing as say the Spurs', but in the past couple of seasons, especially last year's playoffs, its throwback '70's game was actually kind of amazing to watch. However, this year it was an abject mess from both a statistical and visual perspective and was the biggest reason why we failed to advance past the first round. How would you propose we fix it?

Kevin: Blaming Rudy is the easy way out, so I'm not going to do it, but seriously, Rudy Gay needed to step up in the playoffs in a big way, and he didn't. In the Clippers series, he was terrible as often as he was good, and the fact that OJ Mayo couldn't throw the ball into the ocean off Santa Monica Pier didn't help either. More on OJ in a minute, but really, without any perimeter threat, it was a repeat of last year's series against the Oklahoma City Thunder, wherein the defense collapsed on the paint players and fronted the post and effectively decapitated the offense before it got started. Relying on turnovers and stops works great in the regular season, but in the playoffs, you have to have some sort of an offense (this year's Boston Celtics being the apparent exception to this rule). Rudy needed to attack the rim more than he did, and he needed to recognize when he wasn't going to get a good shot and pass the ball. What's hopeful about that criticism is that those are things that can be dealt with through coaching and offseason work. (Here's hoping Rudy doesn't work on his batting average again this summer.)

The OJ Mayo situation is a little more interesting. It's a bit like Black Sabbath getting rid of Ozzy Osbourne: the only way it's going to work going forward is if we replace him with a Ronnie James Dio. Somebody (arguably) even more heavy metal. Picking the wrong guy to be the team's perimeter threat next season will be like Van Hagar, or whatever you call the abomination that released Van Halen III. If we end up relying on a guy who can't knock down shots, or a guy (like Rudy, hate to say it) who just doesn't seem to have it in him on a nightly basis, we're in trouble. This next season has to be Heaven and Hell or the team's going to have to do some serious blowing up in the next offseason, because that Rudy contract ain't getting any cheaper, and neither is Zach Randolph.

I mean, I don't think the team needs to be blown up yet, but doesn't the upcoming season feel like "put up or shut up" time? Like some huge moves have to be made if the current core can't get the pieces in place to make the conference finals?

Scott: I think you're right in that regard. Tweaks need to be made regardless, but this year should be this core's last chance to prove that they can at least contend for the title. Otherwise we'll just be a Western Conference version of the Hawks (which, don't get me wrong, is better than being a perpetual loser like the Warriors).

In regards to OJ, I agree with you, but I want to take it to the opposite extreme: we need Hall & Oates (yes, they're two people, but for the sake of this analogy, I'm going the Charlie from It's Always Sunny in Philadelphia-route and counting them as one). Listen, I love that that Memphis has become a cool island of weirdoes, misfits, and castoffs, but it recently occured to me that we really missed Shane Battier's intangibles. Last seasons' timeouts were incredibly enjoyable to watch and pretty much summed up the essence of the team: the younger guys like Mike and OJ would go to Tony first, who would presumably pump them up with whatever it is that Tony says during timeouts (based on his Twitter feed, I can imagine it's wonderful). Afterwards, Shane came over and would undo the damage give them helpful technical tips. Truly it was the perfect concoction of an irrational boost of self-confidence and veteran savvy. We need to replicate that by going out and replacing OJ with a vanilla nerd; if he could shoot the 3 with any kind of consistency that would be nice too. Theoretically this could be done either through the draft, free agency, or trades, but the main priority is negative swag. A few examples: Jimmer Fredette, Evan Turner, Grant Hill, Shane Battier, Josh Harrellson.

Kevin: If we need anti-swag, maybe we should sign Jaleel White to dress like Urkel on the end of the Grizz bench. Maybe he'd learn some things from Hamed Haddadi that would show Laura Winslow what a fool she'd been. There's certainly some truth to what you're saying about needing a voice of reason. Maybe that's what the front office was thinking when they brought in Gilbert Arenas -- veteran poise. The problem with that theory is that Arenas (1) has no conscience at all about when he takes shots, and thus has no business telling anybody else what shots to take and (2) never stopped being Gilbert Arenas; there's no doubt he was a good locker room citizen at the end of last season, but he was never going to be like Battier. At this point, Battier is practically a player/coach like Bill Russell was.

Evan Turner is probably unattainable, but there's always the Rudy Gay for Andre Igoudala trade that's been floating around for years. Turner's a little too much of a young up-and-comer for the Sixers to be willing to get rid of him, I think.

What type of player should the Grizzlies be looking for in the draft? Matt Moore of CBS Sports has the Grizz taking Marquis Teague (brother of Jeff Teague, who plays for the Hawks) to be a backup point guard, and moving Josh Selby over to presumably fill the "2-guard off the bench" void that's going to be left by the departing OJ Mayo. Sounds good to me, but I worry about taking a point guard. At least we can't draft Hasheem Thabeet again. That's a different type of "anti-swag" than what you were getting at. Tanzania anti-swag.

Scott: I was wondering how long we'd make it through these dialogues before one of us referenced Thabeet. The moral of that story is don't let your owner chose your draft pick. If nothing else, the fact that we're picking 25th means that Heisley probably won't be interested enough to interfere.

I don't watch college basketball, but Jeff Teague is wonderful, and so his brother who plays at an even bigger program should probably be pretty good. Tony Wroten is another prospect I like a lot, who may be available in our range. Regardless, it's unclear whether either of them are able to fill the role as designated nerd. We may have to bring in a someone through free agency. This may be a good thing, seeing as Tony came in as a free agent, and the "anti-Tony" (in terms of personality) would provide a nice balance in the Memphis narrative. On that note, Thabeet should be an unrestricted free agent this summer. 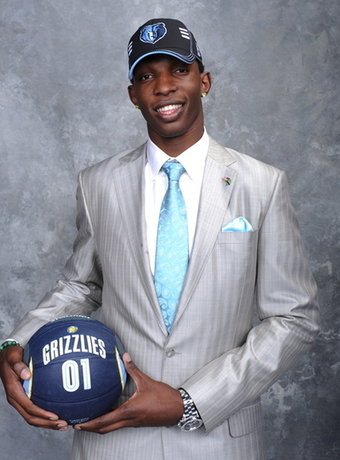