How the Dual Point Guard Lineup Affects the Grizzlies' Offense

Lionel Hollins is starting to play a lineup featuring Mike Conley and Jerryd Bayless on the floor together. Is it helping the Grizzlies' offense? Jerryd Bayless says so. What do the stats say?

Share All sharing options for: How the Dual Point Guard Lineup Affects the Grizzlies' Offense

Since the 2011-12 , you've heard all things pointed toward the frontcourt becoming position-less after the Miami Heat won the championship with Lebron James and Chris Bosh playing as hybrids.

But the backcourts in the NBA have taken quite the change also. Instead of the traditional point guard-shooting guard lineup, you're starting to see more teams play with dual guards in both slots. While the method isn't wildly popular there are a lot of notable tandems:

You can add the Memphis Grizzlies to that bunch. With the injury to Quincy Pondexter, Lionel Hollins has started playing both Mike Conley and Jerryd Bayless together on the court. It's an unusual look as the Grizz haven't had a sufficient enough backup point guard to play he and Conley alongside each other, but it's working fine.

After last Friday night's overtime victory over the San Antonio Spurs, our own Kevin Lipe spoke with Bayless about Lionel going with the 2-guard set of late.

"It's two playmakers. Guys are trying to make plays for other people. We have a lot of scorers on this team, so that's the biggest thing."

The results of the combo-guard lineup that Hollins is beginning to use more?

More points scored. For a team that struggles to put the ball in the basket (24th in ppg, 17th in Ortg, 25th in eFG%), the Conley-Bayless line-up is helpful on that end. But it's a double-edged sword also, so with the good comes the bad. In what is slightly a "small" sample size (114 minutes played together), the offensive rating increases to 110.3 [via NBA.com/stats], up from the regular 100.4. That would be a hare above the Oklahoma City Thunder's O-Rtg of 110.1 which is the best in the NBA.

Opposite of that, the defensive rating takes a dive to 113.7 compared to their league second-best D-Rtg of 97.4. Putting Bayless at the shooting guard hasn't been ideal defensively throughout his career. Last season as a Toronto Raptor, Jerryd allowed opposing shooting guards to have a PER of 21.1 according to 82games.com.

The biggest positive of the Conley-Bayless pairing is allowing Mike Conley to play off-ball on offense, something he rarely got the chance to do last season with their lack of a back-up. When the two are on the floor together, Conley's scoring increases drastically. Via NBA's Statscube, here are Conley's numbers when Bayless is on and off the floor. 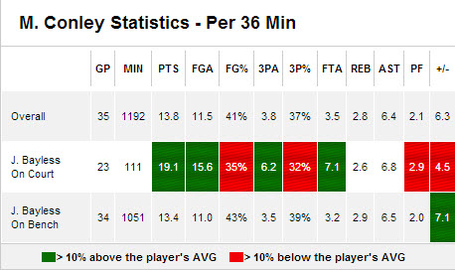 Most think of Conley as the "game-manager" as he takes the backseat to Zach Randolph, Marc Gasol and Rudy Gay in the offense, but when he's put in to be the de-facto shooting guard whenever Bayless has the ball, Conley has been superb.

While his shooting numbers are down across the board when Bayless is one the floor with him, his skill set makes it easier for him to feast on opportunities the defense gives him. According to Synergy, Conley averages 1.19 PPP as a cutter and is 10-15 from the field in that situation. Outside of Tony Allen, the Grizzlies don't have many quality cutters on the team. This adds another dynamic to the often-stagnant offense as Marc Gasol is arguably the best big man passer in the game.

The Gasol-Conley dynamic is one of that can be and most definitely should be used more. Of Conley's 69 assisted shots, 22 of them came from Gasol. Between Gasol's vision and Conley's decision-making on when and where to cut, they have the ability open things up for the rest of the offense.

Here's an example in last night's loss to the Los Angeles Clippers. In a play that puts Gasol on the wing and Conley in the corner, Conley puts himself in position to make a play toward the basket. 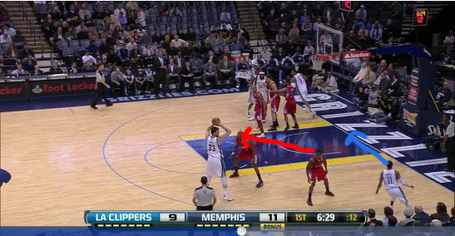 Eric Bledsoe, one of the better defending point guards in the NBA, plays Conley for the ball instead of the cut and a quick turn at the head results in Mike Conley cutting to the basket for 2-points.

Conley's basketball IQ allows him to be a serious threat whereas Bayless, or say a Wayne Ellington, are more likely to look for the jumper or reclaim the ball from Gasol to continue running the offense.

On the other side, things don't change much for Bayless. Most of his numbers stay pat or drop due to him not having the ball in his hands as much, but his +/- increases from -2.8 to 2.8. His presence is the key to allowing Conley to roam free around the court instead of solely creating for others, which is a huge difference from last season. Another increase in his per-36 minutes is his 3PA (5.2), but whether Conley is on or off the floor, he hasn't been that great of a shooter this season.

It'll be interesting to see how often Hollins goes with the Bayless-Conley lineup going forward (4 minutes against LAC), but if we're basing things off the numbers, then it should be frequent. Starting at the beginning of the second quarter seems like a good time to make sure there isn't much fall-off from the starters to the reserves. And with the return of Q-Pon, the defense may look to improve with him at the 3.

For the first time in a few years, the Grizzlies can get creative with the backcourt and playing Conley off-ball and/or with Bayless may be the first step to improving this offense's stability going forward.