A Look At Tony Wroten's "Debut"

I take a look at Tony Wroten's "debut" night against the Los Angeles Lakers and where he can improve most at.

Share All sharing options for: A Look At Tony Wroten's "Debut"

Last night against the Los Angeles Lakers, #GrizzNation got what we have been waiting for in the past few weeks: the Memphis Grizzlies releasing Tony Wroten unto the NBA.

If anyone tells you they walked away from their television set or the Fed-Ex Forum disappointed in what they say in the 26th overall pick then they are lying.

This tweet basically explains how everyone felt about his performance against the faltering Lakers:

Aren't y'all glad we got Tony Wroten in that trade? LOL #GrizzNation

In Wroten’s "first" NBA game, he showed us what everyone thought he could bring to the table: a back-up point guard that can spar Mike Conley some minutes, effectively run the offense with the bench group and bring energy to both ends of the floor. If you had any doubt, you can check those three off the list because he did just that.

The typical box score doesn't stand out. If you didn't watch the game you'd think Wroten had a bad night, but honestly I wouldn't expect more from a rookie playing the first meaningful minutes of his career. His line was simple:

If you look more in-depth you see that Wroten was second on the team in +/- with 16 behind Darrell Arthur's game-high 22.

What stands out most is Wroten getting 5 rebounds in 18 minutes. His height, 6'5, will help the Grizzlies out in the long run especially when playing smaller lineups to accommodate for the Cleveland-Memphis trade. Compared to Rajon Rondo and Tyreke Evans coming out of Washington, this is a plus for Wroten and will likely boost the teams fast-break points when on the floor.

The 4-13 shooting isn't great, but his aggression may have been the best thing to come out of it. 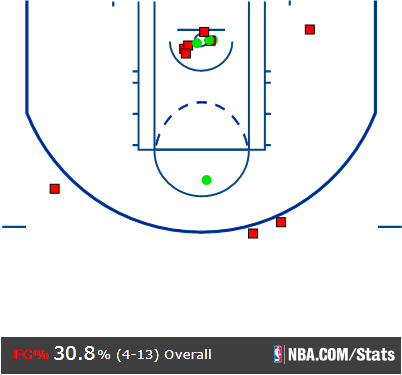 Like Rondo and 'Reke, Wroten isn't blessed with the incredible talent of being a jump-shooter from the beginning and his play shows that. When the game was competitive, Wroten didn't settle for any long jumpers outside of the free-throw line shot he hit. All three of his 3-point attempts came in garbage time (2) or at the end of the quarter.

Subtract the three's and Wroten's line is 4-10 (40%) which isn't as bad as before, but it gives much more of a blueprint to what he did in the game. As i stated earlier, aggression may be Wroten's best trait besides his court vision. In the second quarter, Wroten scored 7 of his career-high 9 points by relentlessly attacking the paint whether it was via fast break, in a set offense or by crashing the offensive board.

When teams begin to play Wroten for his lack-of jump shot, it'll be interesting to see how he adjusts to the game. The most obvious way would be to develop his jumper, but that probably won't be until next season or some time after that. Looking at Rajon Rondo's play in the 2009-10 season, Wroten will have to take the same approach: beat defenders with speed and athleticism. Once the scouting report get's out about Wroten, team's will start playing with a lot of space between.

The best way for Tony to adjust, like Rondo did playing around multiple offensive threats, is to become an effective cutter In '09-10, Rondo averaged 1.25 PPP (points per possession) while shooting 69.5% (73/105) in cut situations. As a "non-shooter" the defense is more likely to lose track of you once ball movement begins. Below is an example of a defender not hesitating to leave the "non-shooter". 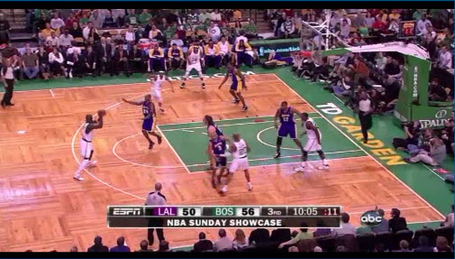 After a pick-n-roll between Ray Allen and Kevin Garnett leaves KG with the ball at the top of the key, instead of staying with Rondo, Kobe quickly rotates toward KG who is a threat to hit the jumper which allows Rondo to cut and receive two points. In the Grizzlies case, KG can represent Randolph, Gasol, Gay or Darrell Arthur as they are all able to hit the jumper from the top of the key.

Here's another example of how Rondo's lack of a jump shot got him open. 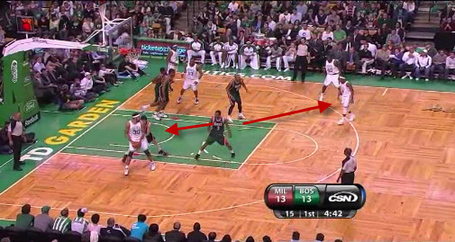 This, of course, will have a lot to do with Wroten's offensive awareness. We'll see how that expands as his playing time increases. As Brandon Jennings creeps closer it makes it easier for Rondo to creep back door for a pass from Wallace for an easy two. Marc Gasol is the best big man passer in the game and if they can get an offensive synergy going, Wroten could greatly benefit an often-stagnant offense.

Small sample size, of course, but a lot of lineups that will likely be used in the future that'll include Wroten had impressive numbers.

The Wroten-Jerryd Bayless-Arthur lineup played a total of 8 minutes together. The results? An offensive rating of 98.1 and a defensive rating of 69.8. With Wayne Ellington shipped to Cleveland, Lionel Hollins stated that Conley and Bayless will have to combine to make up for Wayne's absence from the 3-point line. Wroten may open things up for Bayless as a spot-up shooter (35% this year, 43.9% last season) and his floor vision will make it easier for Arthur to work in the pick and pop while Bayless finds his spots against the defense.

Another solid pairing tonight with Wroten was Marc Gasol. In 10 minutes played, the Grizzlies had an Ortg of 146.4 and a Drtg of 72.5. Again the sample size is small, but it opens up the floor for possible lineups that Lionel can use without sacrificing either the offense or defense.

When you combine the best perimeter defender in the NBA with a 6'5 rookie who can pressure point guards full court, that's has a chance to be one hell of a defensive backcourt. With Wroten under Tony Allen's wing, he may quickly turn into one of the better defending point guards in the NBA.

Wroten imposed himself on the Lakers backcourt, or lack-of, and pressured Steve Nash and Chris Duhon every chance he could get. This won't be the ultimate test to get a grasp on what kind of defender we'll be getting out of Tony this season as I could probably name 10-20 point guards that have been better than Nash/Duhon this season. But the small sample size shows that his combination of height and speed will be able to give opponents fits defensively.

One thing that'll be important to look out for is Wroten defending 2-guards when he and Conley share the floor together. When it's Wroten and Bayless, tonight showed that Bayless will be handling shooting guard duties are he guarded Kobe Bryant several times down the floor.

Overall, coming away from this game, the future is bright for Wroten. Hypothetically, if Wroten never gets a knock-down jump shot, he could become a poor-man's Rajon Rondo or a lesser-Tony Allen. While trading half of the bench wasn't quite worth the salary dump, it was 100% worth it by forcing Hollins to give Tony an important role on the team whether he likes it or not.

Now-a-days, playing the Lakers isn't even a solid team to place an evaluation of sorts, so with the Nets, Hornets, 76ers and Thunder coming up all within the next week, it'll be a great stretch to see what Wroten is really worth.