Mike Conley stepped his game up after Rudy Gay's departure, and he's offering both elite defense and steady offense now. What should we expect from him this season?

After Rudy Gay's departure, Conley took another step forward in proving himself as one of the better members of that second or third tier of point guards in the NBA. As part of the effort in replacing Gay's scoring impact, he registered career-highs in a number of scoring statistics: 14.6 points per game, 1.3 threes, 2.9 free throws made, and a 54.9% True Shooting Percentage. Everything else stayed at a high level relative to the rest of Conley's career norms, some of the highlights including 2.2 steals (3rd in the NBA), 6.1 assists and a 83.0% free throw percentage.

For this upcoming season, Conley is squarely locked into a big role as one of the Grizzlies' most important contributors on the court. Zach Randolph and Marc Gasol are still two of the premier names for the Grizz when you consider the physical bump-and-grind style they play, but there's no dismissing Conley as the vital third member of the team's core.

In Conley We Trust 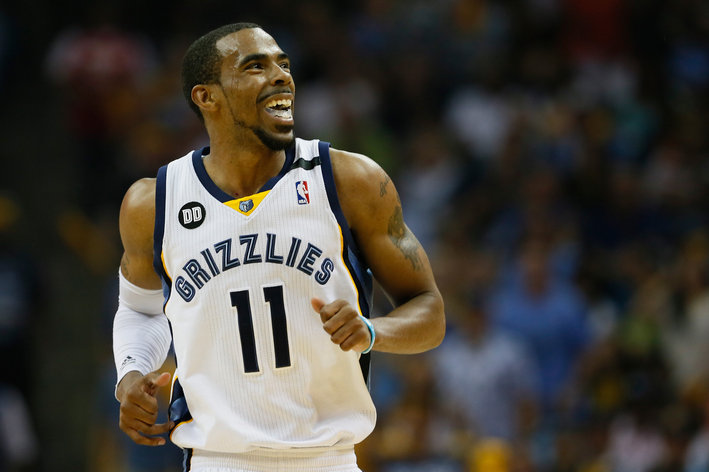 Money Mike knows the Grizzlies still have room to grow.

Everything starts with defense when you consider Conley's value to the Grizzlies. With Tony Allen as his partner in crime, Conley is one half of arguably the NBA's most fearsome defensive backcourt. Between his speed, smarts and activity level, he can make it really difficult for opponents to advance the ball past him while also creating plays in the passing lanes. Also, reaching back to my last post about the Grizzlies' aggressive defense, Conley is outstanding at recovering to his check on the weak side after loading the strong side as part of the defensive scheme. Alongside Allen and reigning Defensive Player of the Year Marc Gasol, this should continue to be one of the deadliest combinations of defenders of any team league wide.

Offensively, it'll be interesting to see what Conley will be able to do in a whole season without Gay. The returns from the half-season without him were nice, but of course, sample size is a factor and defenses may game-plan against Conley more as the primary threat in the backcourt. Conley did show that even with a few extra reps in-game, he could remain a very efficient option in pick-and-roll sets. He got to the rim very well in those sets, and with weapons like Zach Randolph and Marc Gasol screening for him, it's not hard to bet on that continuing to be successful.

Offensively, it'll be interesting to see what Conley will be able to do in a whole season without Gay.

Two things of note will be Conley's playmaking and three-point shooting. His assist numbers didn't exactly jump out at you, but they were certainly solid. With the ball in his hands more and a lack of depth in terms of distributors (after Conley and Gasol, the Grizzlies are looking at the likes of Jerryd Bayless and Tayshaun Prince for playmaking), there is a responsibility for him to at least maintain his playmaking duties. The Grizzlies don't run as much of their offense through Conley as other teams around the league might with their own point guard, but remaining a reliable facilitator will be important for him.

Like with his assist stats, Conley's three-point shooting numbers weren't particularly outstanding (1.3 threes per game on 36.2% shooting – distinctly average for a guard). Of course, three-point shooting isn't quite the need it was last season, with the addition of Mike Miller and the expectation that Quincy Pondexter takes on a larger role this season. However, if Tayshaun Prince remains the starter at small forward over Quincy Pondexter (and early indications are that he will), then a need for three-point shooting in the starting lineup will remain. After the train wreck that was the Western Conference Finals, teams will start to pack the paint more aggressively against Zach Randolph and Marc Gasol. Tony Allen can't shoot and Tayshaun Prince barely can, so it would definitely be important for Conley to be able to provide reliable three-point shooting for that lineup against those defenses.

With all of that said? Well, there's a big load on Conley this season for sure as the top perimeter player complimenting out big men. We know we're getting an elite performance from him on the defensive end, and offensively, we'll probably continue to see Conley performing up to his solid standards. There's a floor in terms of what we can expect out of Conley, and it's probably safe to expect numbers similar to last season.

Hopefully, it's not too far-fetched for those numbers to rise, either. It's definitely worth keeping an eye on if Conley can continue to put up bigger numbers in a full season without Rudy Gay. If he can continue to offer more and more on offense, it'll be huge for a Grizzlies team trying to keep up with their superstar-studded competition.