Coming off an inconsistent and enduring 2012-2013 season, what will the new year look like for the Grizzlies big man?

The 2012-2013 Season was one to endure for Zach Randolph. Coming off a brutal, injury-plagued season, things didn't get much easier for the big fella. He shot 46% from the field, the lowest he'd shot since playing for the Knicks, and while he did have a pretty amazing playoff run, he got shut down in the Western Conference Finals.

This season, ZBo will be asked to get up and down the floor a bit faster under new coach Dave Joerger. Many people find themselves a bit apprehensive as this season approaches, finding it hard to believe that Zach has the ability to play under this type of system. As he pointed out today, however, he was able to do this in the past under Mike D'Antoni, and was apparently one of the coach's favorite players. Basketball-Reference projects ZBo to average 16-11 on 46% shooting again, averaging just under 15 shot attempts per game. This is not the Randolph the Grizzlies need in the regular season, and I don't believe it is the one they will be getting. 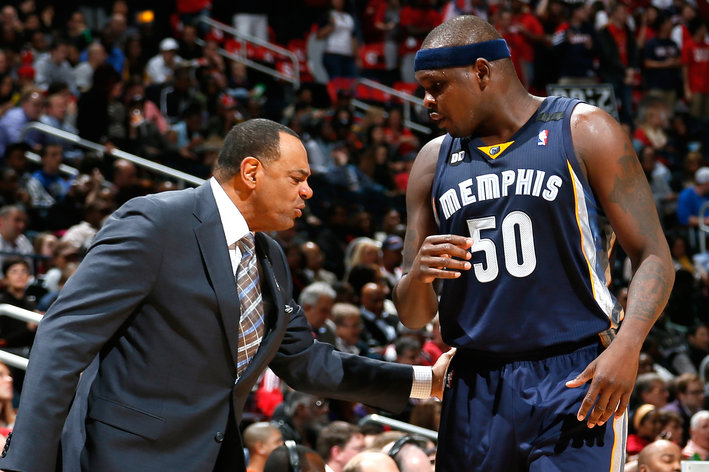 With more outside shooting and additional big man help, and taking into consideration Marc Gasol and Mike Conley's continued development into the leaders and best players on the team, I don't think Randolph will be getting 15 shot attempts per game. Memphis is going to need him to be somewhere between 10-12 shot attempts per game, cleaning up the glass and stockpiling rebounds like his life depended on it. He will have games and opportunities to showcase the "First name 20, last name 10" player that he has been in the past, but what the Grizzlies need throughout the grueling NBA season is for Randolph to play a team role, and to average something close to 15-15 while shooting a higher percentage than 46% and having far fewer isolation plays run through him in the post. This raises two questions: Will Zach Randolph be happy doing this, and is it worth paying him what is on his contract?

Despite the similarities, this is a far different scenario than the one that played out last year with the Grizzlies starting small forward. Zach is a player that carried the Grizzlies in the first two rounds of last year's postseason, and is a player that fits very well into what their style of play has been and, despite the tweaks, will continue to be. However, the money still remains a major issue, and the future of Zach Randolph in a Grizzlies uniform is far from clear.

The last few weeks, I've become obsessed with finality. TV Shows, relationships, periods of life; all good and bad things eventually come to an end. Through my focus on this, I've learned to appreciate much smaller things: colors, smells, moments. This is how I suggest we all approach this season with Zach Randolph.

I don't know that this will be his last season in Memphis. I won't speculate as to whether or not he'll be traded next offseason or if he'll even make it through this full season in a Grizzlies uniform. But I know one thing; eventually, he won't be a Grizzly, and what better year than the present to start soaking in every last minute the big fella is on the floor.