Six Idiosyncrasies of the Memphis Grizzlies - Which should stay and which should go?

A look into some of the less obvious characteristics of the Memphis Grizzlies, and how they play into the success of the team.

Share All sharing options for: Six Idiosyncrasies of the Memphis Grizzlies - Which should stay and which should go?

One of the reasons Randolph has thrived in Memphis and become an effective teammate is evident in his assist to turnover ratio. Ever since he arrived, Zach has had superior numbers to most of his previous season totals (including more than a full assist per turnover in his second and third seasons in Memphis). That was until last season, when his AST/TO ratio dropped to 0.72, his lowest since playing for Portland in 2007.

What does that stat really mean? Well, it's a possession based number, meaning the player must possess the ball in any scenario pertaining to the stat. A low AST/TO ratio paints a picture of a player that is holding on to the ball too long, handling it carelessly and not looking for an open or slashing teammate. That might be okay if you're reaching elite scoring numbers, but that definitely wasn't the case for Randolph last year. I'd expect that to change this year with a full season sans Rudy Gay, but Zach will need to look for those open shooters like Miller and Pondexter. (That's the idea, right?)

Marc Gasol and Jon Leuer not letting it fly

This has been well documented with Marc, and it's now becoming a little evident with Leuer in the preseason. They're both team players that look to make a great pass to allow a teammate to score the easier basket. But there's a point in which a great pass might not be the best play, and that point might be when they are standing 15-18 feet from the goal and there isn't anyone within 8 feet of them (which happens often). I almost want them to try and prove to me that they'd shoot anything worse than 45% if they took every open shot they had within the arc.

When you have the height and length of Gasol and Leuer, there aren't many players that can close out on your shot from several feet away. Marc has the patented Gasolian double handed flip shot, and Leuer has the most fundamental 1960's John Wooden jump shot I've seen on color television. The Grizzlies need perimeter shooting, and we expect it to come from Miller, Bayless and Pondexter ... But perhaps it should be coming from Gasol and Leuer.

Mike Conley using his Best Moves for the Right Reasons

Whether or not you agree on Conley being an elite point guard, I don't think there is much discussion about his status as an elite athlete. It goes down to a genetic level for Mike, and it's on full display for much of the time he's on the court. Here's my issue though: far too many times do I see Conley making incredibly athletic plays to simply keep the offensive possession going. I'd rather him make the play than turn the ball over, of course, but this is more about where he goes while making those possession-saving-joystick-crossover moves.

Part of this lies with Conley needing to continue to assert himself offensively; instead if seeing Mike circle back out of a jam to reset the offense with 6 seconds on the clock, I'd like to see him attack the basket with every ounce of his athleticism. I honestly don't think most players can handle Mike's speed in the paint, and I don't think they'd know what to do with a Mike Conley that played with the aggression of Russell Westbrook part of the time. 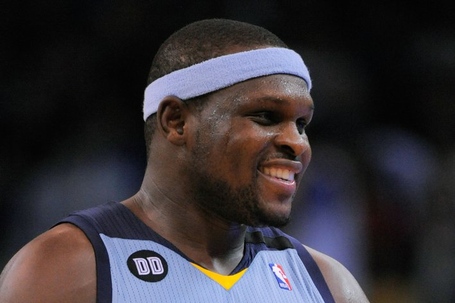 This was a tricky one for me. When I first thought about this particular trait of Zach Randolph, my inclination was to say that it may be time for ZBo to tone down the Grindhouse Gatekeeper role where he pummels anyone that tries to challenge the alpha male of FedexForum. My rash judgment had me thinking that Randolph may be letting the technical foul accruing, smack talking, headband losing personality become a distraction. After all, championships aren't typically won by teams that lose their cool.

But when I went and looked at the stats, I found that ZBo only had 5 technicals for all of last season. You know who else had 5 techs? Marc Gasol. You know who had more than both of them? Lebron James. The attitude and demeanor of Randolph is one of the most identifiable parts of the Grizzlies, and as long as he can keep it under control in the playoffs, I'm okay with letting the big guy Perkinize and Griffinize people.

The STL/PF ratio isn't something I've seen used around very much, but I find it interesting as it relates to the Grizzlies guards, particularly to Conley. Mike started out his career like most other guards probably do, having roughly twice as many fouls as steals. Each season, Conley has improved that ratio, mostly by increasing his steal totals. This culminated in the past two seasons with Conley actually finishing with more a few more steals than he did personal fouls (174-171 last year).

That's an incredible statistic to me, especially when compared to Tony Allen, the best perimeter defender in the NBA, and the fact that his ratio last season was 119-211 (in 8 minutes less per game than Conley). That ratio, for Mike Conley, is a testament to his develop as a player and to the work he's put into his body over the last few years. Good things will happen for the Griz with Conley making sound, calculated risks on the defensive end, and the same goes for our beloved Grindfather. 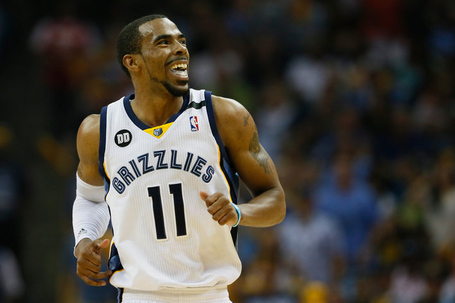 Dave Joerger being a Coach and not a Mentor

First off, I am very appreciate for the things Lionel Hollins did for this team. He gave structure to very young players that were coming from all walks of life, and he taught them invaluable lessons about life and spirituality. That was probably very key to our path to success five years ago with near-adolescent-players like Conley, Gasol, OJ Mayo, Rudy Gay, Kyle Lowry, etc. But now, those players are either grown or gone. In fact, the youngest player on the roster is now Jamaal Franklin, a 22 year old who played three years in college.

We don't need a father figure anymore, we need a basketball coach who will teach our players how to play at a higher level and be able to draw up superior plays for them to execute. This could be another line on the list of reasons the front office shipped out Tony Wroten; the Grizzlies are done playing babysitter. They want to win basketball games with superior play and teamwork, as they should, because this team now has the maturity and leadership to guide themselves.