2013-14 NBA Season - Which Memphis Grizzlies pairing will flourish and flop?

Through two preseason games, the new faces alongside the Grizzly vets bring about a world of possibilities in regards to players' games complimenting each other. So who should take the court together, and who should avoid each other at all costs?

Share All sharing options for: 2013-14 NBA Season - Which Memphis Grizzlies pairing will flourish and flop?

While there are 12 or so guys on every NBA roster once the season starts, and while there are 5 players on the court at all times for teams during games, the game within the game can showcase combinations of players whose talents mesh well together. John Stockton and Karl Malone, Michael Jordan and Scottie Pippen, Gary Payton and Shawn Kemp...all great duos who played off of each other well. As the Grizzlies continue to experiment with lineups through the preseason, there are some possible pairings that have Grizzlies fans salivating and some that, well, scare the Grizz out of you. So who should flourish together on the court, and who would flop?

Nick Calathes and Mike Conley- At points last season, Mike Conley and Jerryd Bayless would play together. And it was a very good offensive pairing; Jerryd handling the ball allowed Mike to play off from time to time and not have to bring the ball up the court, while Mike facilitating for Jerryd let him do what he does best...things like this.

Now of course Jerryd Bayless is still on the roster, but through two preseason games one of the most impressive players has been Nick Calathes. David Thorpe of ESPN has said that Nick Calathes is one of the best passers he has ever seen. And I am starting to believe him. Jerryd certainly is a better scorer than Calathes at this point in their respective careers, and Jerryd's athleticism and tenacity are nice to have on the court. But, Nick Calathes is not a combo guard, he is a point guard through and through. With Nick running the offense for Mike, Conley could focus more of his attention on scoring the basketball while Nick makes the best decision for the team offensively. No heroball required here. Increased drives, free throws and three point attempts for Conley would all benefit the Grizzlies offensive spacing immensely. If Conley is a bigger threat to score, it will open up long range shots and the paint.

Zach Randolph and Ed Davis- Through two preseason games, these two players next to each other in the starting lineup has not had the best effect. A major reason for this is that their games are too similar; they both depend on playing in the paint. Ed Davis has not been nearly effective enough in the pick and roll to help out Zach's spacing, and Zach, while hitting his mid-range jumpers some, does not have the facilitating abilities of a Marc Gasol to help out Ed in the paint. Defensively, Ed is put into a tough position playing the 5; one of the weaknesses in his game is his inability to defend bigger front court players. Ed getting pounded in the post by Samuel Dalembert, for example, is not ideal. Ed is most efficient playing alongside a true center, which he has not had the past two games. Ed Davis needs Marc Gasol in the worst way, and I would say Zach does as well at this point in his career.

Zach and Ed both need Marc in the worst way.

Jon Leuer and...Everyone- Jon Leuer has really impressed so far this October. Because of the fact this is indeed happening during the preseason, it should be taken with a grain of salt. But Leuer's game is so flexible that it really can flow and fit with any member of the Grizzlies roster. He has enough height and understanding of positioning to rebound well off of Marc Gasol and Zach Randolph mid-range misses, while at the same time having the capacity to shoot those shots himself and facilitate for bigs who need the ball closer to the basket, like Kosta Koufos and Ed Davis.

Leuer has also shown in the past that he can defend multiple positions in the post while being able to create for others on the offensive end. He is capable of running the high post position that Marc mans while Ed Davis can set screens and roll to the basket. Players like Jerryd and Jamaal Franklin can cut to the basket, while Quincy Pondexter and Mike Miller can run along the three point line and get a dish if the defense collapses. Leuer needs to show he has the capability to perform like this against true NBA competition, but if he can, he can push Ed Davis for minutes. Cheers, Jon Leuer. Enjoy this from the other night.

Jerryd Bayless and Mike Miller- This possible pairing being a flop is a pretty big bummer, especially considering they will spend a vast majority of their time together on the court. But with Jerryd having the scorer's mentality, giving up opportunities for himself so that Mike Miller can have an open shot is not going to happen as often with JB at the point as compared to Calathes. And Miller, at this point in his career, cannot create for himself consistently. He will be dependent on screens and passes off of drives to the basket. If Jerryd consistently can be that distributor of the basketball that Miller needs him to be, they could flow quite well together. But with the presence of Calathes, Bayless is going to try to make the most of his minutes. And that likely means more shots and drives instead of dishes outside and in the paint for others.

6 Idiosyncrasies of the Grizzlies 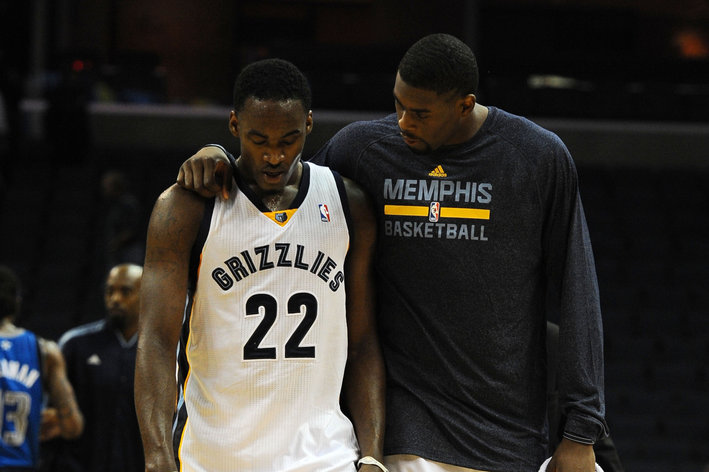 Which subtleties of the Grizzlies should change?

Starting with Sunday's next preseason game against Maccabi Haifa, more and more lineups and substitution varieties will be trotted out. As players like Marc Gasol, Tayshaun Prince, Tony Allen and Quincy Pondexter filter back into the game day roster it will be interesting to see how they fit and flow alongside the new faces of the Grizzlies. How will Calathes create for slashers like Tony? What will a Twin Towers lineup of Marc and Kosta Koufos look like? Will JB try to be a more facilitating point with Calathes waiting in the wings? The ability of the Grizzlies to engage each other and bring out the best in one another is key to success in Memphis this coming season.