Which Memphis Grizzlies players will benefit most from a faster offensive pace?

So often in the past, the offense would get into sets 8-10 seconds into the shot clock. With the hiring of Dave Joerger as head coach, a faster pace is already evident through training camp and two preseason games. But who exactly will benefit most from pushing the tempo?

Share All sharing options for: Which Memphis Grizzlies players will benefit most from a faster offensive pace?

GET IT ACROSS HALF COURT! WHAT ARE YOU WAITING FOR? HURRY UP!!!

All of the statements above have been heard repeatedly by Grizzlies fans, whether at local watering holes, all throughout FedEx Forum or perhaps in the comforts of their own homes as they yell at the television. Mike Conley, Jerryd Bayless, Keyon Dooling or Heaven forbid O.J. Mayo or Gilbert Arenas taking their sweet time getting across half court. And then once the ball got there, things like this happened.

A Tayshaun Prince running hook shot as the shot clock runs down probably isn't the most efficient offensive play. And it wasn't just Tayshaun. Whether it was Zach Randolph isolation mid-range jumper or a Jerryd Bayless hero-ball launch from just in front of the three point line, there were plenty of moments where the Grizzlies had to take inefficient shots because they did not actively attack the basket in the early parts of the shot clock. Add into the schematic issues the fact that aside from the recent addition of Mike Miller the roster still is looking for long-range shooting. This Grizzlies team shot 34.5% from three last season, and while players like Quincy Pondexter will likely see more time and opportunity to "let it fly", the personnel of Tayshaun Prince and Tony Allen still limit you somewhat from deep. You possibly have the makings of another frustrating offensive season.

Pushing the pace will help to vertically stretch the floor.

But new Head Coach Dave Joerger has made it a priority to get into offensive sets with greater urgency and placed a great deal of focus on movement. That coupled with the defense continuing to create transition offense opportunities will give the offense more chances to score. Pushing the pace, as has been discussed on this site multiple times through the offseason, will take some time to get used to, but will help in vertically spacing the floor where horizontal spacing in the way of three point shooting may still be a struggle at times. So whose offensive game will benefit most from an increase in movement, pace and transition offense?

A player whose quickness with the basketball was not always utilized under Lionel Hollins, Conley will figure quite largely in the offensive motion schemes of Joerger and company. Conley is one of the more athletic point guards in the league, a player capable of making opposing players freeze on hesitation moves such as this one.

Conley's offensive game also began to expand after the trade of Rudy Gay to Toronto; Mike took on more offensive responsibility and shined at times in that role. Here is an example of that from this past season's playoffs, a 28 point, 9 assist performance against the Clippers.

Several aggressive drives against Doc Rivers' supposed "Defensive Player of the Year" candidate DeAndre Jordan, effective passing to Marc Gasol and Zach Randolph and solid playing off of pick and rolls. However, the stats above were the exception and not the rule for Mike last season, especially the assist numbers; he only averaged about 6 assists per game last season, and throughout his career he has not been a high number assist point guard. Part of this has to do with missed shots, but Conley could also continue to develop his ability to put the ball in places for his teammates to be most efficient and effective.

And the motion offense, which will be utilized more under Coach Joerger, will allow for Mike to utilize his abilities as a passer more, and not just in two-man games with pick and rolls. A great example of this is Rick Adelman's offense that he currently runs with the Minnesota Timberwolves. Members of Coach Joerger's staff have served under Adelman, and aspects of his system will likely be in the new offensive scheme. And for the Wolves, their PG Ricky Rubio is tremendously important to their offense running smoothly. Here is an example of Rubio taking advantage of the overload to the strong side with an attempted lob pass.

A lob pass to a weak side big (Ed Davis) could be done in a similar situation. In this next clip, Rubio spots an open wing player on the weak side and makes the pass cross court to the spot shooter.

An overload to a strong side consisting of Mike and Zach and/or Marc could result in an open Quincy Pondexter or Mike Miller from three on the weak side. Mike plays well off of the pick and roll, and that will almost certainly still be a major part of the Grizzlies offense. But allowing for Mike to better utilize his speed while finding lanes to create for others will allow for him to increase his assist numbers and take his game to the next level.

Clips Courtesy of Analyze the Offense

The motion offense is predicated on creating point guards and consistent slashing to the basket. And that is where Tony Allen makes his offensive contribution more often than not. Take a look at Tony's shot chart from this past season. 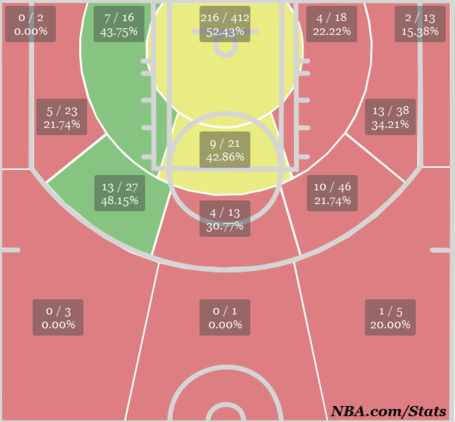 A vast majority of his baskets in the paint, whether on cuts, drives or rebounds. And Tony can be explosive when healthy; heres a great example from a couple of season ago of Tony cutting and taking advantage of the defense collapsing on O.J. Mayo.

Tony, as a cutter, will benefit from more motion in the offense off the ball. Screens will allow for him to do what he does best, get to the rack and finish. Improved free throw shooting will also make him a bigger offensive threat. But even more so than the actual scheme, getting into sets faster and pushing the ball up the court with help a player with Tony's energy get more involved in the offense. Here is a great example of this from Tony's Boston Celtics days.

Sometimes, you have to let a hungry dog eat. Tony Allen's defensive intensity will be instrumental to vertically spreading the floor in transition offense. Easy transition baskets will continue to be an important aspect to the Grizzlies offensive plans.

Q-Pon really rounded into form as the season went on and he recovered from a mid-season knee injury. It really showed in the playoffs, where he shot 46% from 3 point land and a whopping 66% inside the paint. Quincy is a player who could have a breakout season, and the updates in scheme will only help him to thrive. I will use the final game from last season, arguably Quincy's best (22 points), as an example of why.

First off, he is not given enough credit for his slashing ability. He isn't just a "3 and D" player. In that game 4 against the Spurs, he hit threes, but he also was strong slashing and cutting to the basket. Quincy will be more than capable of coming off screens and crashing the offensive boards early in sets to keep possessions alive. Q also is good offensively in transition; he can help Mike, JB and Nick Calathes getting up the court faster off of rebounds and turnovers. Quincy's three point shooting would make teams pay immensely for overloading the strong side. And Q's defense has really come a long way; he isn't on TA's level quite yet, but he is closer than you'd think. He can create on that end of the court as well, allowing for other wings and bigs like Ed Davis and Kosta Koufos to run the floor and take advantage of opponent's mistakes. Quincy has improved every season he has been in the NBA, and this season he will take a leap forward, possibly earning Most Improved Player votes thanks to his fit in Joerger's system.

Quincy Pondexter, in this system, could be this season's Most Improved Player.

There were a lot of people in Memphis concerned and/or disappointed by the departure of Lionel Hollins. And rightfully so; he was an excellent coach for this team at the time. But as the Grizzlies evolve into a more efficient and analytic offense, faster pace and more motion sets are necessary to better space the floor. Mike Conley will be able to better his teammates through ball movement and consistent aggression driving to the lane. Tony Allen will benefit from more opportunities to cut to the rim and use his defensive skills to create offensive opportunities. And Quincy Pondexter is set up to have a tremendous season on both ends of the court.

Change is hard. But this change, in the short and long term, will better the Grizzlies offense and make the team better prepared for the wild Western Conference.