Your Memphis Grizzlies take to the Grindhouse court yet again this preseason to take on O.J. Mayo and the Milwaukee Bucks. From Tony Allen the offensive specialist to the Point Guard battle and everything in between, we've got you covered.

Where and When- FedEx Forum- Memphis, Tennessee. 7 PM CT.

How You Can Watch/Listen- NO TV/92.9 FM ESPN Memphis

Milwaukee- Carlos Delfino (out), Ersan Ilyasova (out), Gary Neal (out), Zaza Pachulia (out), Ekpe Udoh (out)

Memphis- Tayshaun Prince (Day to Day with an illness)

The Grizzlies enjoyed an old fashioned butt whooping of Maccabi Haifa this past Sunday. It was the first preseason appearance for Marc Gasol, Quincy Pondexter and Tony Allen, and they all impressed. Tony Allen somehow scored 19 points to lead the Grizzlies, hitting 8-10 free throws and his one three point attempt. Gasol had 17 points, 7 rebounds, 4 assists and 3 steals while Q had 8 points and 4 assists in 20 minutes. Kosta Koufos also returned to the lineup, racking up an impressive 12 rebounds in 22 minutes alongside 10 points for a double double. The Grizzlies looked like...well, the Grizzlies. And that is refreshing and reassuring after seeing the Chicago and Dallas games.

But tonight, the Bucks come into We Don't Bluff City to tangle with the Grizzlies. They are banged up; Pachulia, Udoh and Delfino are recovering from surgeries while Ilyasova and Neal are nursing sprains. But the star of the show, at least from the perspective of the Grizzlies, is O.J. Mayo. The former Beale Street Bear played for the Dallas Mavericks last season, and after a rough ending with Coach Rick Carlisle he departed Dallas for Milwaukee this past off-season in free agency. Memphis fans tonight would also be wise to watch the development of Milwaukee bigs Sanders and Henson; two long, athletic front court players who can defend and run the court very well.

As for the Grizzlies, five things to watch for-

Was it a one-off appearance for Treat Tony on the offensive end of the court? In a piece I wrote about which players will benefit most from the new offensive pace, Tony Allen's ability to run the court in transition and cut to the basket was discussed as a way for the Grindfather to get more involved offensively. Tony made 3 of his 5 baskets in the paint, but the really impressive aspect of TA's performance was the amount of times he got to the line. If he can shoot close to 80% from the charity stripe and be more aggressive on cuts, his offensive game will be a benefit to the Grizzlies, more so than it has been in the past.

Where for Art Thou, Tayshaun?

The only player on the Grizzlies yet to play in the preseason, Tayshaun Prince has apparently been dealing with a stomach virus that refuses to go away (according to Ron Tillery of the Commercial Appeal.) If Tay plays, it will be interesting to see how he fits with certain players on the court. For example, I think Tayshaun running the offense as a stretch 4 with Jerryd Bayless, Mike Miller, Quincy Pondexter and Marc Gasol would be a fun lineup with lots of opportunities for perimeter scoring and allowing for both Marc and Tay to play closer to the rim. Tayshaun continues to be the subject of chatter about possible deals; if he stays a Grizzly, it would be nice to see him begin to get some preseason minutes in preparation for San Antonio and how he will fit in with such a deep roster.

The Grizzlies committed 21 turnovers Sunday evening, which is entirely too many, especially against a non-NBA team. Some of it can be attributed to the increased and feeling out the system, some can be attributed to trying too hard to make highlight plays and being too unselfish. But Coach Joerger said in his post-game presser that he would like to cut down on those turnovers. A team like the Bucks, with guards Mayo and Brandon Knight, could make the Grizzlies pay in transition on turnovers. Any time there is change, there will be growing pains. But continuing to move the ball and assist on baskets without turning it over as much should be a focus both tonight and in the last 5 games of the preseason. 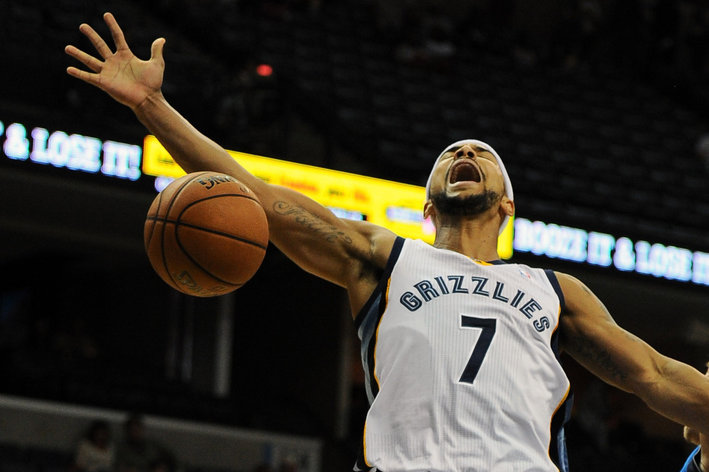 Which player pairings will flourish or flop?

Ed, while not having a dominant performance, did some good things against Maccabi Haifa. 5 points, 6 rebounds and 2 blocks in 12 minutes of play. By comparison, Jon Leuer had 6 points, 4 rebounds and an assist. The idea that Ed Davis is directly threatened for minutes by Leuer at this point is certainly a stretch; the front office and coaching staff is going to continue giving Davis every opportunity to succeed. But continued growth of his game, consistency in the paint on both ends of the court and more improvement from the free throw line would be good to see as Ed continues the build to the most critical season of his career.

Jerryd Bayless. Nick Calathes. Heck, for preseason purposes Andre Barrett. Who fills in behind Mike Conley continues to be an intriguing October storyline. JB played well against Maccabi Haifa, hitting 2 three pointers and scoring 12 points with 4 assists in 24 minutes for a whopping +/- of +27; only Z-Bo and Marc had higher +/- numbers than Jerryd. Calathes does not have the explosiveness, the offensive skill set or the ability to pull off a head band like Bayless does. It seems every other preseason game the battle for minutes flip flops. Jerryd is playing for a contract, whether it is in Memphis or elsewhere. The better he plays, the more he is worth both in free agency and in a possible trade down the road for the Grizzlies if Calathes comes along the next few months. Something to keep tabs on moving forward.

Kevin Yeung will be back later on with a recap of tonight's game. Hopefully the Grizzlies take the positivity of the glorified scrimmage against Maccabi Haifa and carry it over through the rest of the preseason. 15 days until San Antonio!