Coming off an appearance in the Western Conference Finals, the Memphis Grizzlies look to a new head coach to build on the franchise's recent success and live up to the honor of ESPN The Magazine's #1 Franchise in Sports.

NBA pundits may give you no reason to expect the Memphis Grizzlies to improve upon their 2012-13 NBA season, but the Griz fans aren't listening in Memphis, TN - and they may know some things that most of the national media has yet to unearth, even in the midst of being named ESPN's #1 Franchise in Sports for 2013. Even after a franchise-record-setting 56 regular season wins, the Griz and their fan base will look to grit and grind their way to the next level, just like they've done the past three years while forging an identity that's stout on defense and somewhat flaccid on offense. 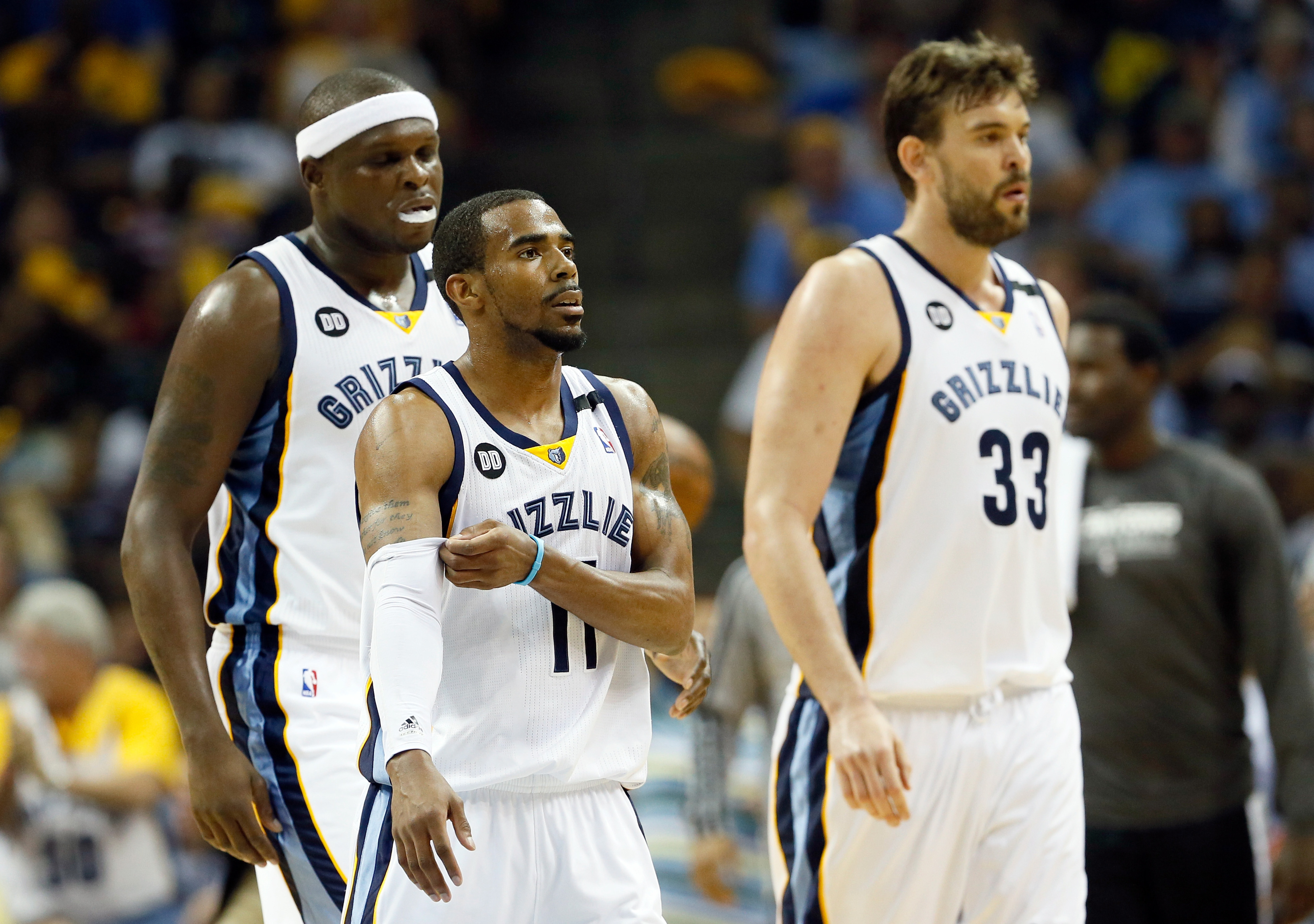 And it's not just about making more three pointers - The areas in which the Grizzlies need to improve are scattered through the foundation of the team's scheme. The NBA is now aware of how to neutralize the brute force of Zach Randolph and Marc Gasol (see Western Conference Finals vs San Antonio), but the new ownership of the team is turning the page on the sporadic nature of intuitive coaching and looking to a more conglomerate marriage of open communication and logistical prowess in their overall management style.

Dave Joerger has assembled a dynamic staff that is continuing to emphasize a lot of the values that Lionel Hollins forged in Memphis, both on and off the court. However, the Grizzlies no longer rely on the spiritual, guiding force of Hollins; they have a mature team that is capable of using advanced techniques that take advantage of the multitalented tools on the Grizzlies' roster. Joerger, a basketball junkie, will embrace the progressive approach of Jason Levien and Jon Hollinger to maximize the opportunities the Grizzlies have on offense and defense.

More: All of SB Nation's NBA previews to date

Much of Joerger's success will depend upon his team's ability to execute under a much faster pace. The Grizzlies have already earned a living with a ferocious defense that needs very little adjustment this offseason, and the team believes a lot of their previous offensive pitfalls can be repaired by getting into their sets faster and precisely rotating the ball to the best available shots. Joerger and the Grizzlies' front office can provide the blueprint, but can the roster execute the plan?

A large portion of the Grizzlies success will rely on the continuing ascent of Mike Conley and Marc Gasol. These are incredibly talented, intelligent players that have now played several years together, and along with Zach Randolph, have a chemistry that has complimented one another a degree that allows few NBA teams to hang with them for a full four quarters. But the Griz want more; they want to have no equal. That goal is only attainable by Mike Conley and Marc Gasol becoming more offensively aggressive while Zach Randolph develops into more of a role player that can still fill in the gaps with double-doubles --- a ridiculous thought? Perhaps. But the depth on the Grizzlies bench might allow them to reap a potent harvest from their biggest offensive weapons.

One of this team's greatest strengths may lie in its bevy of bench and role players. As opposed to past seasons of the franchise, where bench play relied on free agent gambles or the ascent of budding stars, the current roster really only needs some subtle improvements from the likes of Tayshaun Prince, Jerryd Bayless, Quincy Pondexter and Tony Allen. Prince must return from the dead and be more proactive in offensive. Bayless needs to temper his fire to eliminate turnovers and low percentage shots. Pondexter is showing flashes of brilliance in preseason play, and may end up usurping Prince as the team's best option at small forward if he can provide a legitimate scoring threat within the Griz' rotation.

As the most important role player on the team, existing as the heart and soul of the Grizzlies, is the elite, stalwart defender in Tony Allen. The front office recognized his significance to the team by signing him to a longterm deal in the offseason, but the Grindfather has to be one of the first people to buy into Joerger's plan to maximize offensive possessions in order for the Grizzlies to improve this season.

There is one absolute fact you can attach to the fast-pace-style that Dave Joerger wants to implement: If it's going to work, the starters cannot consistently log 40+ minutes a game. If you want Zach Randolph to sprint down to the low post every 24 seconds, then Ed Davis is going to have to be a more consistent presence on defense (which isn't asking too much when backing up ZBo) and, although the talented forward has shown plenty of ability to get to the foul line, it's paramount that he is able to convert his activity on offense into points (because potential only counts in trading cards).

Mike Conley's absence on the floor may always be the chink in the Grizzlies' armor, but early signs are indicating that newly-NBA-minted Nick Calathes may be able to actually generate offense (while playing the standard Grizzlies defense) as the backup point guard. Calathes is an elite passer who can also finish aggressively to the rim, something the last several caretakers of the position cannot claim. So, if the Grizzlies put a bandaid on their backup point guard slot, they turned their backup center into the lovechild of Robocop and the Terminator. Kosta Koufos is a legitimate starting NBA center who will be able to provide a stable presence in the paint when Marc Gasol needs rest. Additionally, Koufos will be able to operate in other lineups to take advantage of player match-ups that present themselves with such a large and mobile front court.

Don't take the title of this category for face value ... these players will end up playing integral roles in the upcoming season for the Grizzlies. Mike Miller, the prized signing of the Griz' offseason, will bring a tenacity that can only further fuel the flame of the Grit'n'Grind mantra. They know what they have in Miller: he can hit the long shots, rebound and make savvy plays on both sides of the court. The problem will be that the tenacity of Miller's game will most likely allow him to only be a partial contributor during the regular season. He's a huge asset, no doubt, but his largest role may not be actualized until somewhere around April, 2014.

Jon Leuer, a young player in which the Grizzlies' front office has shown much confidence, has spent his first preseason with the team showing that he is a totally legitimate NBA player that can operate at multiple spots on the court. Leuer has the awareness of a veteran player, and possesses an impressive range of skills that give him opportunities to score on the perimeter as well as in the paint. If Leuer can capitalize on the spare minutes available to him, Dave Joerger may find himself discovering new ways to get him on the court more often.

The new regime of the Grizzlies may have the biggest opportunity for improvement by showing some ability to develop young, raw players. Jamaal Franklin is the first draft pick of the post-Heisley era, someone that the Grizzlies front office was thrilled to see fall to the second round. The athletic guard has some obvious talent, but can Joerger find minutes for him to develop with the team, or will he be swept under the rug of the NBA D-League?

Best Case Scenario: The Grizzlies unleash a new identity on offense. It's not necessarily about them being able to score 110 pts every night; it's more about them starting off games with an offensive directive that will curtail the Grizzlies tendency to fall behind in the first half and require them to surmount a hustle-based comeback that exhausts players over the long haul. I see the Grizzlies as legitimate title contenders if they are able to maintain their level of defense while increasing their offensive production by enough to tip-toe into the top 10 in the NBA.

Worst Case Scenario: Although they may have competent backups to use for crucial positions, the Grizzlies are a Mike Conley or Marc Gasol injury away from possibly stalling out for long streaks of games. Even with such debilitating losses, I believe the Grizzlies could find various lineup combinations to compensate for the shortcomings and continue to compete with the better teams of the NBA. I'd be shocked to see the Grizzlies fighting for a playoff spot in any circumstance, and, barring injuries, I'd be fairly surprised to see them finish as anything less than the 5th seed in the Western Conference.