The preseason trudges along, and in the process of the Grizzlies moving towards its merciful end they defeated the Hawks in Atlanta on Sunday 90 to 82. Since many of us were unable (or unwilling) to watch or listen, a look at the box score will help us figure out what exactly happened in front a the capacity crowd of 8,731 in the ATL.

Share All sharing options for: Griz in a Box Recap- Memphis Defeats Atlanta 90-82

The Grizzlies are in the midst of a three game preseason road trip. On Friday they started the trip with a win against the Orlando Magic in which Mike Miller turned in a 19 point, 11 rebound performance. Sunday, it was the hot shooting of one Jerryd Bayless that led the Beale Street Bears to a 90 to 82 victory. Jerryd was not the only Grizzly to have a good performance. In this installment of "Griz in a Box" we will take a look at 3 Grizzlies who shined and 3 who suffered in Atlanta. I try to be a positive guy, so we will start with the positives.

Jerryd Bayless- he got the start in place of Mike Conley (who got a well deserved night off) and shot the hell out of the ball; 8-9 overall in the game, 6-6 (!!!) from 3 for a grand total of 22 points in 24 minutes. He also had 3 assists and a rebound in that time, looking comfortable scoring the basketball. That's the good news; the bad news is, his +/- for the game despite all that was a -8.

Now, there are some reasons for this. No Grizzly starter (Tony Allen, Mike Miller, Zach Randolph, Marc Gasol) posted a + in the +/- column and they were likely more concerned with being in good sets and getting in shape than actually beating the Hawks. Jerryd's offensive game is key to a Grizzly bench that will need to make sure games stay close or stay leads while the starters are out resting. This performance is promising.

Jerryd will be needed to produce offensive firepower off the bench to keep the lead the starters produce.

Ed Davis- "The Boss" had a nice showing in this game; 26 minutes, 7-11 shooting for 14 points, 8 rebounds, 2 blocks and a steal. Perhaps he feels the cool Minnesota breath of Jon Leuer breathing down his neck for minutes, but Ed seems to be feeling more comfortable as the preseason grinds on.

One slightly concerning point is that all of Ed's makes came inside the paint; he was 0-3 from outside the lane. This speaks to the more and more likely possibility that while Ed is the key back-up to Zach, Jon Leuer could likely cut into Ed's minutes given the match-up. Leuer is better from mid-range than Ed, and as long as he is rebounding at a decent clip (6 against the Hawks in 16 minutes) he won't be a liability on that end. All that being said, Ed will continue to get chances to develop. Hopefully he takes advantage of them.

Ed Davis had the 2nd highest +/- on the team as well, showing the lead grew with him on the court. The player who led the team in that stat today?

Nick Calathes- 25 minutes, 1-6 from the field, 2-2 from the line, 4 points, 10 assists, 3 rebounds 2 steals and a block for a +20. Calathes is really showcasing his capabilities as a passer for the Grizzlies this preseason. 10 assists to 3 turnovers is a fine ratio; for every 3 assists, he commits a turnover. And even though his shooting touch is not his strength, teams will still need to collapse on him on the dribble drive to the basket. Calathes pick and rolls with any big are going to be quite a handful for opposing defenses; you are in a tough "pick your poison" situation defending the penetrating guard, rolling big or the shooting on the perimeter. As long as he can stay with the quicker back-up PGs of the NBA defensively, he can contribute quite meaningfully and put the ball in his teammates' hands to make plays. 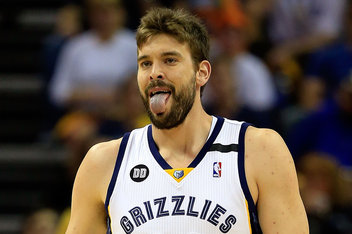 What each Griz needs to change

Tony Allen- 3-11 from the field in 23 minutes. Yikes. Tony needs to know when his shot isn't falling and do his best to help facilitate for others more than worry about his own points. Yes, its the preseason, and yes, TA is never going to be asked to be an offensive catalyst. His role is to be the best perimeter defender in the league (2 steals today), attack the boards (6 rebounds) and be a source of energy for the team. However, "Trick" Tony on the offensive end will hurt at times, and during those games players such as Quincy Pondexter and Jerryd Bayless will cut into the minutes "The Grindfather" values so much. No one wants Tony to be James Harden; he just can't be an offensive blackhole.

Quincy Pondexter- This faller distinction has more to do with the lack of consistent development than it does his actual performance. He actually posted a +12, the 3rd highest of any Grizzly. However, the Q that was an offensive power against the Bucks has not shown himself the past two games. 0 points, 0-2 from the free thrown line, only 1 rebound. 2 steals and 3 assists are nice in 18 minutes, but Quincy will also have to share the load of scoring when the bench players are in the game. He needs to show the consistent ability to drive the lane and get to the line, roam the perimeter and pass to the open shooter when teams collapse on him. Quincy the offensive aggressor is needed in order for this team to make the NBA Finals. He wasn't in Atlanta Sunday.

Quincy the offensive aggressor is needed for a Finals run. He wasn't that on Sunday.

Tayshaun Prince- Seriously, what's happening here? This is one hell of a stomach bug. Either he is really very ill, Tayshaun is so comfortable with the offense that he doesn't need preseason reps or the Grizzlies are patiently waiting for the moment another team needs a SF for a trade. More and more, I am leaning toward the third option. It sounds like Kosta Koufos is nursing a leg injury (according to the Commercial Appeal), but his absence is not as concerning as that of someone who has yet to play in the preseason and is supposedly the starting SF for the team. Mike Miller and Quincy Pondexter may be bringing an end to the short-lived Tayshaun Prince era in Memphis.

For more on Tayshaun's possible future with the Grizzlies, click here

Finally, three stats for the road.

The Grizzlies now head to Toronto to pay their old friend Rudy Gay a visit. Hopefully Rudy can see more clearly after his eye surgery that Memphis is better off without him.