Fantasy Grizzlies: Who to Take (and Avoid) on Draft Day

Share All sharing options for: Fantasy Grizzlies: Who to Take (and Avoid) on Draft Day

As the season creeps ever closer, so does many folks' fantasy basketball drafts. Here at Grizzly Bear Blues, we are preparing for our Auction-style draft and Head-to-Head stat league match-up against our friends over at Three Shades of Blue in the league known as "The Battle of the Blues." The draft is fast approaching (Oct. 27th), and in preparation I have been mock drafting, reading and analyzing for the task at hand; beating 3SOB into fantasy submission. The first in this series of write ups will involve the team that will likely have the most players drafted off of it, given who we all are here for; the Memphis Grizzlies. There are some fantasy studs on this squad, who can contribute across a variety of different categories. However, there are also guys who can contribute in one category only, or players that should be avoided entirely. So, in the world of Fantasy Basketball, who will be a stud and who will be a dud on the Grizzlies?

This is all according to Yahoo! Fantasy's projections for the coming season in comparison to the scoring system of "The Battle of the Blues", which is a Head-to-Head stat league. This means that in order to win each match-up each week, you have to win as many of the following categories as you can: Field Goal Percentage, Free Throw Percentage, 3 Point Shots Made, Points Scored, Total Rebounds, Blocks, Assists, Steals and Turnovers.

Big Spain. Wendigo. MG33. El Capitan. The Franchise. If there were ever a fantasy cornerstone center, it would be Marc Gasol. The big fella had a heck of a season both on the real life hardwood and on the cyberspace court last year. Heading into the 2013-2014 season, Marc is projected to shoot almost 50% from the field, which for a big isn't all that impressive fantasy wise. Al Jefferson, Serge Ibaka and Al Horford are all projected to shoot as well or better. What sets Marc apart is his ability to contribute across the board in all stats. Projections have him shooting 85% from the free throw line (rare for a center), scoring 14 points with 8 rebounds, 4 assists, 2 blocks and a steal. That is uncommonly consistent production at the center spot. Players like Dwight Howard may rebound better, but his free throw percentage will crash your team. Or someone like Larry Sanders may get more blocks, but he won't be as consistent from the line and with assists.

Marc's ability to contribute across categories makes him a top-15 fantasy basketball player.

Marc gives steady, positive contributions across every scoring stat except 3 point shooting. Considering that Marc will likely play a larger role in the offense than expected, he could possibly score and assist more and at a higher percentage as well. even if that doesn't come to pass, 8 out of 9 categories ain't bad. He is a top 15 player overall and the best center in fantasy basketball. Get him.

For more "The Battle of the Blues" info, CLICK HERE.

Speaking of steady production, Mike Conley provided similar consistency at the Point Guard spot. Ranked #25 overall by Yahoo!, Mike Conley is an elite steals machine. Only Chris Paul got more steals last season, and Mike is projected to be an expert pickpocket yet again this year at 2.2 steals per game. Mike also is steady as she goes at the free throw line (83%), from 3 (projected to make 1.3 a game), scoring (14.3 points) and protecting the rock (only 2 turnovers a game.) Where Mike could continue to develop is in his assist game; 6.1 per game is his projection, behind folks like Kyle Lowry and Brandon Jennings. If Mike can advance his ball distribution and finish at the rim more consistently, he could go from a top 25 fantasy player to top 15. Steals are that valuable.

Prince's future in Memphis is somewhat up in the air at the moment, and that only adds to the fact that Tay should be avoided on draft day. Tayshaun will likely see his minutes cut if he does stay in the Bluff City, and minutes are a huge factor when it comes to fantasy basketball; it is hard to put up numbers when you don't see the court. Quincy Pondexter, Mike Miller, Jerryd Bayless...all of these guys will likely dip into Tayshaun's time. Add on to the fact that Mike Conley and Marc Gasol will continue to be more active in the offense, and Tayshaun averaging more than 8 points per game this season seems quite unlikely. He doesn't jump out at you in any particular statistical category, and aside from above average rebounding from the small forward spot, Tayshaun should be treated like a fantasy lepper and a free agent add only if injuries or a trade send Tay to more minutes in lottery bound Orlando, Philadelphia, Phoenix or Boston. 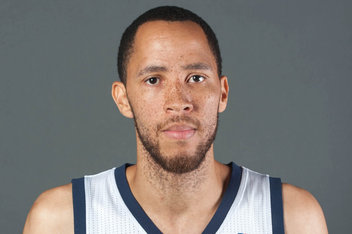 Is Tay's bug costing him his job?

This one hurts my heart a bit; as an Ed Davis fan, I hope Ed explodes and has a great year for the Grizzlies, fulfilling the potential that the Front Office (and myself) see in the Richmond, Virginia product. However, with the selection of Ed as a dud, I look to make a larger point; one player who is awful at one statistic can throw off the entire mojo of your roster. Ed Davis is a solid rebounder, possibly elite shot blocker with more minutes and finishes well around the rim. However...free throws. His awful free throw percentage can completely throw an entire roster. Say you have a team who averages 74% from the free throw line in a given week, 85 out of 115 exactly. However, the two times you play Ed he goes 7-14 from the line, 50%. That takes the entire percentage down to 71%. Those three percentage points can make the difference between fantasy glory and losing to Jonathan May of 3SOB and hearing about it on a Saturday morning radio broadcast.

If Z-Bo gets moved, or Ed drastically improves from the line and gets a lot of minutes, then you take a flyer on the "Boss" of potential. Otherwise, for the time being, avoid my man Ed.

In the next installment of Fantasy Basketball, we will take a look at one stat superstars who can help solidify your dominance (hint-Tony Allen.) Until then, grind on Fantasy Ballers.