The Price You Tay: What If Prince was Never a Grizzly?

In what will surely be viewed as a pivotal moment in Memphis basketball history, Rudy Gay was traded to Toronto alongside Hamed Haddadi in exchange for Jose Calderon and Ed Davis. The next step of that deal involved the Grizzlies shipping Calderon to Detroit for Tayshaun Prince and Austin Daye. While the Grizzlies were indeed better post-Rudy, and Tay had success in Beale Street Blue, Tayshaun's 2-year, $15 million deal may be more trouble than it is worth to this Grizzlies team. So, the question is, what if the Grizzlies had held on to Calderon and had never dealt for Tayshaun Prince?

Share All sharing options for: The Price You Tay: What If Prince was Never a Grizzly?

The Grizzlies would have been better off in the long run if they had never dealt for Tayshaun Prince.

There is the theory. And in Quentin Tarantino fashion, I will work back up to the logic for this argument from the beginning.

The Grizzlies offense last season through the months of December and January was, to be kind, sluggish. In a January 2nd article from Ron Tillery of the Commercial Appeal, these issues were attributed to a lack of pace and the struggles of Mike Conley. Here are some quotes from the article:

"When we're in half-court the lanes are clogged up and he can't drive," Hollins said of Conley. "When we're in the open court, he has more opportunities to beat his man off the dribble and get to the basket. But it affects everybody. It's not just Mike."

Some truth to these statements, for sure. But unmentioned in the article was what was apparently the thought process of the front office; Rudy Gay is a big part of the slow pace, of the offensive inefficiency, of the lack of ball movement in half-court sets. The front-office, according to various reports, also blamed part of Conley's struggles on Rudy Gay. And not necessarily because Rudy was selfish, or a bad teammate; he was simply not fitting into the future of the roster and his touches and shots were taking away more efficient opportunities for Conley and Marc Gasol to thrive. Jason Levien and company felt that between that and the high price to keep Rudy (2 years, about $37 million) it was time for a change.

It wasn't that Rudy Gay was selfish; it was that his skill set did not fit the needs of the roster moving forward.

And change they did. They completed the three team deal, sending Rudy and Hamed Haddadi in exchange for Jose Calderon and Ed Davis. Then, the Grizzlies shipped Calderon to Detroit for Tayshaun Prince and Austin Daye. To the surprise of many, but not our analytically based front office, the pace quickened, the ball moved through Tayshaun Prince more effectively than it ever did through Rudy Gay, and Marc and Mike came into their own as players, increasing their usage and offensive skill sets through the Spring.

The Grizzlies made the Western Conference Playoffs as a 5-seed, defeated the Clippers in six games and the Thunder in 5 before being swept out of the postseason by the San Antonio Spurs. The most successful season in Grizzlies history, by any stretch of the imagination; a 56-26 regular season record and a Western Conference Finals appearance. Here is the highlights of my personal favorite moment from that run, the Game 6 clincher at home against the Clippers. I was at that game, and it was the most energetic sports crowd I have ever been a part of.

But a closer look at what that success was would tell you that while indeed the Grizzlies were better, and while the Western Conference Finals run was indeed a wild and wonderful ride, questions began to rise in the minds of many as the off-season raged on. How can Tony Allen and Tayshaun Prince start together after re-signing TA and the offensive struggles of the San Antonio series? How will Mike Miller fit into the Grizzlies' rotation? Will Jerryd Bayless get more point guard minutes at the expense of Nick Calathes? Or will Jerryd continue to play off the ball, where he appears to be more comfortable in a scoring role?

Is it in fact possible that the key piece of the Rudy trade was not just Ed Davis, or Tayshaun Prince at all, but the financial flexibility and increased offensive responsibility for Gasol and Conley that happened with Rudy Gay gone?

And if we are to subscribe to that idea, what would have occurred if the second half of that deal never occurred, and Jose Calderon stayed a Grizzly along with Ed Davis? Here is a possible chain of events that could suggest that the Grizzlies would be, in fact, better off having never completed the 2nd half of that trade.

First off, here is how the lineup would have looked-

One of two things would have occurred; either Jerryd Bayless would have started at the '2' and bumped Tony Allen to the '3,' or Quincy Pondexter would have started at the '3,' keeping Tony at the '2.' Let's assume that they go with the latter, as they like Jerryd's explosiveness off the bench and feel Q is a solid enough defender at the '3.' Quincy's PER was 11, lower than Tay's 11.5 but taking into account Quincy's injury mid-season, his numbers likely would have been higher. In fact, one could possibly argue that had Q been healthier at this point last season the trade for Tayshaun may have never happened. Quincy is at worst an above average defender, and his ability to shoot the three as the season went on would have helped with spacing.

More: Fantasy Grizzlies: Who to draft and dodge in Fantasy Basketball.

But obviously, the Grizzlies would have been thin at the wing. Which means players like Tony Wroten and Darrell Arthur would have played more in both big and small lineups. It also likely means a player like a Chris Johnson would have stayed on the roster for likely the entire season -- I reflect this in my roster above. Some Grizzlies fans would enjoy this; Johnson showed flashes of floor spacing capabilities and would only be needed to play 10-12 minutes a game.

More small lineups with 3 guards would cause some defensive issues, but offensively tandems of Jose Calderon and Jerryd Bayless or Mike Conley would cause match-up problems for opposing defenses, as Calderon is a career 40 percent 3-point shooter, Mike can dribble, drive and dish and Bayless is far better playing off of the ball and slashing.

Plus, offensive efficiency could be compensated for defensively with the roster as constructed here. A lineup of Mike/Calderon/Q/Davis/Gasol, for example, would space the floor quite nicely while having two bigs who could help defend the paint on the drive past a defensive liability like a Calderon. Offensively the ball would still have moved effectively in these smaller lineups, if not better because of Calderon's ability to protect the rock; he was second in the NBA's assist-to-turnover ratio statistic only behind Chris Paul last season. The drop off defensively would have been worth the rise offensively, at least for one season.

Here's an example of how Calderon would help the Grizzlies. 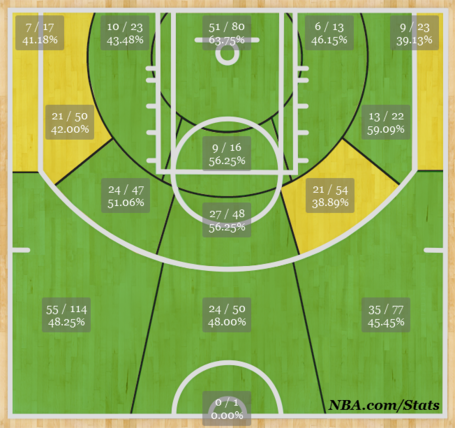 So using this logic, let's say the Grizzlies indeed still get the 5 seed, as they did this past season, and meet the Clippers still. Tayshaun shot 40% in that series, grabbing 4 boards a game and 2.5 assists. Q's stats in that series? Forty percent shooting, two boards and a half of an assist in 14 less minutes on average. Something tells me Q would average about the same numbers in starter minutes, if not better. And Caron Butler, or Matt Barnes, would not have been too much defensively for Quincy. In addition, Calderon's presence would result in better spacing and pace. I think Grizzlies in 6 is still a real possibility.

Where the Grizzlies would get into trouble would be against the Thunder. The only thing that would possibly save the Grizzlies would be the fact that Q would be on Martin and TA would have to guard Durant out of necessity. A tougher match-up without Tayshaun, no doubt, but since Westbrook is out, I think a Grizzlies-in-six prediction is not far fetched.

So, the Grizzlies make the Western Conference Finals, and get swept by the Spurs in this scenario. Same result. But here's the kicker, and why you can possibly argue that even if the Grizzlies only get past the Clippers it is still worth it; Calderon's $10.5 million was an expiring deal. That is basically dumping Rudy Gay's salary, aside from the $3 million owed to Ed this season. 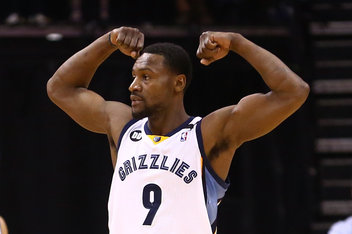 In total, about $14 million freed up. What to do with it? Well, Andre Iguodala was a free agent this Summer and signed a 4 year, $48 million contract. Could the Grizzlies have offered that and still signed a Nick Calathes, Mike Miller and Jon Leuer? Perhaps. Could they have signed two solid role players, like a J.J. Redick or Kevin Martin and a Mike Dunleavy while leaving money to re-sign Ed Davis and Quincy Pondexter? Surely. Would Zach's contract be as big of a question in either of these scenarios? It would not appear that way. The key here is, it would have opened up a world of possibilities, ones that had not existed with Rudy Gay on this roster. Ones that don't really exist now with Tayshaun on board with two years and $15 million remaining on his current deal.

Calderon's expiring deal would have opened up a world of possibilities in reshaping this Grizzlies roster.

Hindsight is always 20/20. You hear that a lot. And there was no way to predict the injuries and run the Grizzlies went on in the Western Conference postseason. But Jose Calderon would have provided spacing where Tayshaun did not consistently enough, he would have enabled Jerryd Bayless to play to his strengths and would have allowed for Quincy Pondexter to start, likely expediting his growth as a player. The real key would have been in a off-season with increased cap room, an off-season in which Andre Iguodala could have been a Grizzly, or J.J. Redick, or Kevin Martin, with better financial flexibility in the long term to re-sign the young core of your roster.

His play for the Grizzlies was a solid part of last season's run. But given the current situation of the roster, and how Jose Calderon would have helped the Grizzlies both spacing wise and financially, the Grizzlies would have been better off in the long run if they had never dealt for Tayshaun Prince.