Will the Memphis Grizzlies' roster improvements translate to more wins?

In spite of the improvements made this offseason, there is a nagging feeling surrounding the Grizzlies this season as their competition went out and made big-name acquisitions during the summer.

Share All sharing options for: Will the Memphis Grizzlies' roster improvements translate to more wins?

If you look at the Grizzlies' season-by-season results, you'll see a bunch of seasons with wins in the 20s and a handful in the 40s (oddly, none in the 30s). You'll also see a handful of first-round exits, as well as a pair of second-round exits. Then, at the bottom of the list, you'll see the result from last season gleaming in contrast to the finishes above.

Without question, last season was the best season in franchise history for the Grizz. The 56-26 record (.683 winning percentage) was our best mark ever, topping the lockout-shortened 41-25 record (.621) of two seasons ago or the 50-32 record (.610) of 2003-04 if you're one to place an asterisk on lockout-shortened seasons. For the first time ever, we reached the Western Conference Finals. While our relatively young franchise doesn't have a particularly impressive track record, the current group is breaking new ground for us.

And during the offseason, they only got better. Even with so-so cap flexibility heading in, the Grizzlies were able to snag a remarkable bounty for themselves. There's no thinking twice about the subtractions of Darrell Arthur, Tony Wroten, Austin Daye, Donte Greene and (kinda) Fab Melo when you see the additions of Mike Miller, Kosta Koufos, Nick Calathes and Jamaal Franklin as well as the resigning of Tony Allen. While the plan is to keep the same starters, the bench is leaps and bounds ahead of any other group of substitutes that've been fielded in past seasons. It could be as much as 11 or 12-deep with solid rotational players. 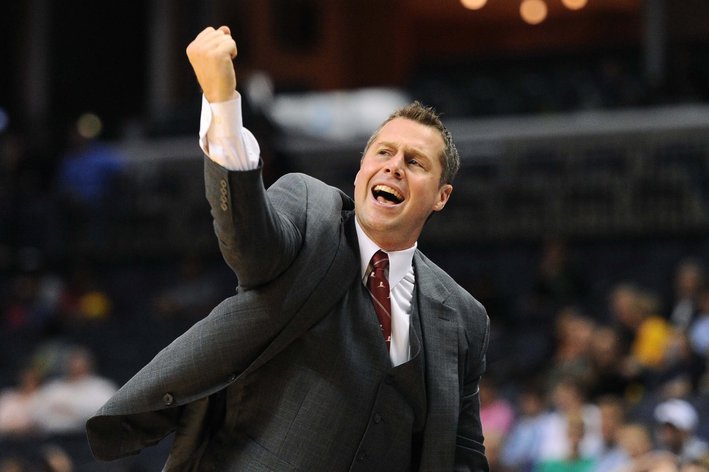 Subtle changes that can improve each player on the Grizzlies' roster.

Throw in the expected improvement from Quincy Pondexter after his great playoff run and a full season of a Rudy Gay-less offense, and everything is pointing up. Maybe one could point to rookie head coach Dave Joerger as a weakness, but it'd be difficult to spin a strong case out of that when he's already been in the fold as an assistant coach since 2007, was responsible for building the elite defense of the Grizzlies and is more agreeable to the front office's statistical approach than Lionel Hollins was before him.

Yet, this Grizzlies team just doesn't seem like a contender. While this team could very well be the best pool of basketball talent Memphis has ever presented at once, there's just a feeling in the air that they can't do it again.

55 wins is a common baseline expectation for contending teams with a tangible chance of winning it all, with title favorites often taking 60 or more wins. They're fielding a better group than their 56-win, third-round exit bunch from last year, and still this Grizzlies team isn't drawing many votes of confidence.

Grantland.com's Zach Lowe named the Grizzlies as a lower-tier contender alongside the Indiana Pacers, the Houston Rockets, the Los Angeles Clippers and the Brooklyn Nets. By consensus, however, it seems like the Grizz are considered the worst in that tier. In ESPN's Summer Forecast, the Grizzlies were predicted as a 51-win 5th seed (fewer than any of Lowe's contending teams) while barely sliding into the NBA champion discussion with just 2 votes (tying the Rockets for fewest among teams with votes). In Hardwood Paroxysm's season preview (which, at just 99 cents, you should totally buy), all of Lowe's contenders claimed at least one vote for conference champion with the exception of the Bulls and the Grizzlies, and every team claimed multiple division title votes except for the Grizzlies whom received just one vote.

Looking at the Grizzlies, it may be puzzling why so many experts prefer other teams over them. They're right up there with the Indiana Pacers as the very best defensive teams in the league, ranking second in defensive efficiency with just 97.4 points given up per 100 possessions. While it's more of a hopeless cliché than anything else, the "defense wins championships" saying does have a bit of merit to it as elite defenses backed by weak offenses generally tend to perform better than elite offenses backed by weak defenses.

Even that offense, one so dreadful in the past, is turning a corner. The Grizzlies had an offensive rating of 103.3 after the Rudy Gay trade compared to 100.4 before it. Three-point shooting, the team's Achilles' heel in the Western Conference Finals against the Spurs, should be just a bit stronger with the addition of Mike Miller and the counted-on improvement of Quincy Pondexter as well as a greater use of Jerryd Bayless as a scorer rather than a playmaker. We can also talk about Dave Joerger's plans to implement a faster offense with more focus on perimeter shooting. Greater use of small ball lineups are a possibility, and it'll all mean more spacing for Zach Randolph and Marc Gasol to work their magic inside of the three-point line.

this group stands tall over last season's which primarily featured Bayless trying to play point guard as well as two power forwards too small to play center in Darrell Arthur and Ed Davis.

Perhaps more important than anything else is the added bench depth the Grizzlies now have after their offseason acquisitions. In his first season as a head coach in the NBA, Joerger will be granted flexibility with his lineups. Calathes is able to create plays off of the bench, and he will be flanked by shooters in Pondexter, Miller and Bayless. Ed Davis and Kosta Koufos combine for one of the league's best tandems of backup big men, and Jon Leuer has proven capable at multiple positions. The addition of certain needed skill sets (Miller's shooting, Calathes' playmaking, Koufos' size) as well as likely improvement from holdovers are reasons this group stands tall over last season's which primarily featured Bayless trying to play point guard as well as two power forwards too small to play center in Darrell Arthur and Ed Davis.

Logic would have it that improvement over last year's record would make sense after improvement over last year's team. As soon as you start expanding your vision past the Grizzlies, however, things suddenly get bleaker. While looking at the Grizzlies on paper can turn a Grizzlies fan into an optimist, reality can turn an optimist into a pessimist just as quickly.

In the Western Conference, you suddenly see a retooled Los Angeles Clippers squad with Doc Rivers at the helm. Out of the corner of your eye, you can spot the San Antonio Spurs lounging contentedly in the background as they always do. Close, far too close for comfort, you can see the Oklahoma City Thunder, temporarily (and only temporarily) slowed by Russell Westbrook's knee injury, and the Houston Rockets with their newfangled, 6'11" and 285 lbs toy at center.

With all of that talent in the Western Conference, it's difficult to pick the Grizzlies as a favorite. In fact, even projecting them for a significant improvement in result can be hard even when they've upgraded their talent core, because everybody else outside of the teams already at the top (the Thunder and the Spurs) upgraded as well. This offseason saw Doc Rivers, Dwight Howard and Andre Iguodala, all greater gains than Kosta Koufos and Mike Miller, migrate to playoff teams in the West.The Thunder should be fine come playoff time when Westbrook is healthy, and it's basically a given that the Spurs will keep chugging along.

If you want to consider Rockets' GM Daryl Morey's 5% theory, what it basically means is that if a team has even a 5% chance of winning the title, they go for it. The Grizzlies' championship odds can probably be estimated to around 5%. Certainly, this team is closer to contention than they are to getting Andrew Wiggins. At the same time, though, it feels like it would take a lot of luck to bring home a ring. Getting a Westbrook-less Thunder team last season was good luck. Getting the Spurs, well, there was nothing lucky about that.

At this stage, we can't rule out anything. Pondexter could turn out a Most Improved Player candidate. Gasol could emerge as the unquestioned number one center in the league. Calathes could prove to be a diamond in the rough. However, all of those are far from sure bets.

An educated guess would slot the Grizzlies back into a middle seed. That could mean they'd be fighting the titans of the West from the start of the playoffs, with the Rockets, the Warriors and the Thunder (a scary thought, but losing Westbrook will cost them some wins in the early going) would be candidates for first round opponents. The Spurs and the Clippers loom as potential matchups in the later rounds. With the depth of power teams in the West, the playoffs tower over the Grizzlies as a fearsome gauntlet.

What this boils down to is, in spite of the talent added this offseason and the feel-good vibes with the roster the front office has managed to build, the smart money may be on the Grizzlies making a regression to the second-round exits of previous seasons. It's safe to name the Griz as one of those teams with 5%+ odds that should go for it, but it would take a lot of luck for them to succeed.

(editor's note: to which I quote the best thing Rudy Gay ever did/said - Make your own luck.)

There aren't many ways to see this team improving their odds, either. The Zach Randolph trade rumors have been rumbling, but any Randolph trade would likely be for future assets and cap flexibility rather than a proven veteran that can help the Grizzlies any more than Randolph can right now.

Even without adding a starry name to their ranks this offseason, the Grizzlies are balanced, deep and even with exciting young talent that will continue to rise.

What that leaves us with is, well, a bitter taste in our mouths. I've probably managed to put a frown of the (beautiful!) faces of a handful of readers, if not more. Great.

For all of the talent that Memphis has surrounded itself with, there is a positive. It's that this team is a well-constructed one. Even without adding a starry name to their ranks this offseason, the Grizzlies are balanced, deep and even with exciting young talent that will continue to rise. Not perfect, but they'll never be an easy matchup for any opponent. The upside on this team is high, and working in our favor is that when talent faces off with talent, unexpected things can happen. Realistically, there are less likely things than the Grizzlies ending up as the second seed this season.

As Grizzlies fans, we can take pride in the fact that this team is one that is very well positioned to capitalize on any opportunity that might crop up. If injuries strike, if a team underperforms or if Byron Mullens hogs the ball as Byron Mullens likes to do, the Grizzlies are competitive enough to claim an edge in the standings out of that. This is a good basketball team.

It's visible that no matter what path they might take, however, redeeming that 5% chance will be no easy feat accomplished. The competition is high-level, and once again, the Grizzlies have been thrust into an underdog role. While they're better than before, the climb is steeper than before. With unfinished business left in the Western Conference Finals still hanging over our heads and the improvements made in the summer setting the tone for this season, we could be in for quite the ride.