The preseason enters its final week and the Grizzlies are in the Great White North to take on Rudy Gay and the Toronto Raptors. Aside from multiple tweets joking about Rudy's eye sight issues, what should be on the minds of fans heading into preseason game 7?

How You Can Watch/Listen-

Well well well, if it isn't Rudy Gay. Mr. "I don't like contacts or sports goggles so I am going to play basketball legally blind." I hope the off-season surgery went well for him, and that he comes to realize some of that dreaded "potential" that he has, because even Stevie Wonder can see that (A) that salary is an abomination (not Rudy's fault, but it is) and (B) the Grizzlies got considerably better without him.

I never hated Rudy; on the contrary, I was on team "Trade Z-Bo", in favor of keeping Rudy. I am, however, OK with acknowledging that I was wrong in that regard and wish Rudy the best in Canada.

The Grizzlies picked up a win over the Atlanta Hawks last Sunday behind Jerryd Bayless' hot shooting and Ed Davis' solid game. Toronto, led by dunk champion Terrence Ross with 27 points on 7-15 shooting, including 6 three point shots, beat the Knicks Monday night in Toronto. The Raptors are an interesting team; their starters are above average with Gay, Lowry, Valanciunas, DeRozan and Johnson. On top of that, their bench is entertaining for no other reason than it includes a dunk champion in Ross, long range shooter Steve Novak, journeyman DJ Augustin and Tyler "Psycho T" Hansbrough. Here's hoping Grizzlies fans see one of the following things happen in Toronto-

A sweet dunk, or Psycho T!!! It's the preseason, let's make it a little more lively. 5 things to look for in Toronto this evening:

In the NFL preseason, the second to last preseason game is the one that teams usually treat most like a regular season game. From game planning to substitutions, starters play the most and the game is like a "dress rehearsal", the last practice before opening night. With the Grizzlies season opening a week from Wednesday night in San Antonio, a good chunk of the new offense installed and most of the roster at the disposal of Coach Joerger, will the Grizzlies treat this game in a similar manner? The last preseason game before the season starts is against division rival Houston at FedExForum. It would make sense to rest the "core four" of TA, Mike, Marc and Zach in that game and allow younger players like Nick Calathes and Jon Leuer to get more time while folks like Melvin Ely, Tony Gaffney and Willie Reed fight for their roster lives.

Look for the starters to possibly get closer to their usual regular season minutes and the bench players to get run in spurts with starters, similar to how a regular season game would be run. The fourth quarter will likely be garbage time, but for the first three quarters Joerger may try to get a real feel for where his team stands heading into the season.

Is he sick, is he on the block, is a deal pending and the other team is thinking it through? Where, oh where, is Tayshaun Prince? And would tonight be a good night for him to make his preseason debut? Getting his game legs under him against the Raptors would benefit everyone involved. And whatever role Tayshaun fits into, it would benefit him to get reps in that role before the season starts. If he is starting, that isn't as necessary. However, if it is possible that Mike Miller or Quincy Pondexter starts and Tay comes off the bench with, say, Jerryd Bayless (which would be awesome), it would be good for Tayshaun to get a feel for that before the real games starts.

Tayshaun may be a part of the Grizzlies roster, despite efforts to make a deal. If that is the case, it's time for him to "feel better" and get some preparatory minutes.

3. Marc Gasol- "The Franchise" at Work

Sometimes in this life, you take the little things for granted: sunsets, good health, a call from your folks. In the hustle and bustle of preparing for a season, it's important to take a step back and enjoy when your team has a world class talent. The Grizzlies have that in Marc Gasol. Here's a tremendous example from a little more than a week ago.

Marc can dominate the paint like the great defensive centers of old, orchestrate the defense like a coach on the court, pass like a point guard and shoot from all over the floor. Marc Gasol was recently named the #10 player in ESPN's top 500 NBA rankings. That's right, Memphis, drink it in; you have a top 10 player in the NBA. Whether it is tonight, or next week against San Antonio or the entire season, these kinds of players do not come along every day. Enjoy the poetry in motion that is Marc Gasol as a basketball player.

A major focus of the Grizzlies' offense in the past few days has hopefully been taking better care of the ball. On an offense that can use every chance at the basket they can get, losing possessions does not bode well for offensive execution down the road. New systems mean adjusting to new forms of screens and new areas of the court being utilized, perhaps more or less than before. For example, if the offense calls for kicking the ball cross court to respond to a strong side overload and you haven't been called upon to make that pass in the past, it will take time and reps to understand the spacing of the defense and how to best complete that pass. If tonight is treated as that dress rehearsal for the opener, hopefully sets will be more crisp and players will look more comfortable in Coach Joerger's motion offense.

The Price You Tay 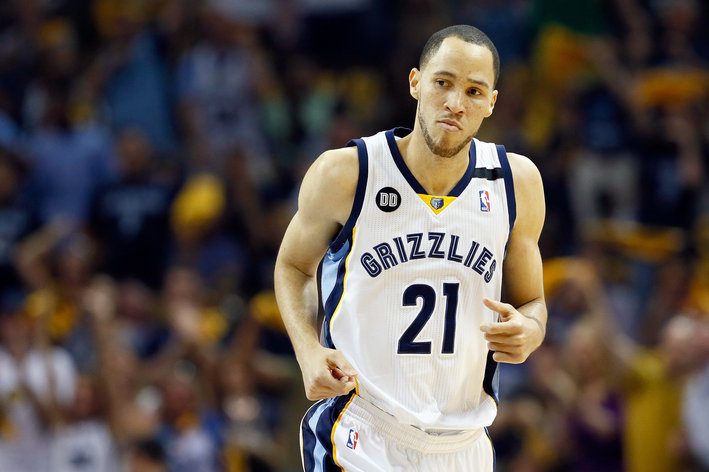 What if Tayshaun Prince had never come to the Bluff City?

5. More Positives for JB and Ed

JB shot the ball extremely well against the Hawks and has shown the capacity to score the basketball in bunches and in bursts, which would be extremely helpful off the bench. Meanwhile, Ed Davis has had a solid run of games, using his athleticism and length to grab boards and finish in the paint. These two players, alongside Quincy Pondexter, are the key bench holdovers from last season and are truly a big part of whatever success the Grizzlies have this season. The better they can play together and feed off of each other, the better for the Grizzlies. Another solid effort would build momentum toward the Spurs and beyond.