NBA Preseason Griz in a Box: The Silver Lining for Griz vs Rockets

The Grizzlies had a golden opportunity last night to launch themselves into the regular season with a solid performance against the Houston Rockets, a division rival who will surely be competing with them all season long for playoff seeding and the chance at an NBA Championship. The result, a 92-73 drumming. But all dark clouds have a silver lining. Let's dig deep to find that son of a Grizz in this edition of "Griz in a Box."

Share All sharing options for: NBA Preseason Griz in a Box: The Silver Lining for Griz vs Rockets

It sucks to lose.

Preseason, regular season, postseason, off-season. It doesn't matter. Even when the games "don't count", even if there are perfectly valid reasons for why it happened, it sucks. And it especially sucks when you feel that in your heart of hearts, your team didn't give everything they had.

You long for opportunities in which you have direct control of outcomes; I have learned that as a coach and as a fan. I wish with everything I have that I could help more, that I could do it for them, that I could fight and claw and scratch alongside my players or my favorite team's players...

But you can't, and it can feel helpless. You watch as they lay an egg of an effort, and begin to question whether whatever hope and belief you had going into a season filled with promise was misguided. You let doubt creep into your mind that maybe the pundits are right, maybe Quincy Pondexter isn't ready to be what the Grizzlies need. Maybe Marc Gasol can't be the closer, maybe the Grizzlies didn't get enough shooting in the off-season.

You wish you could do it for them, fight and claw, but you can't and it feels helpless.

Learning patience is an extremely difficult task; the virtue of understanding can be just as daunting to acquire. And as the "pre" turns into "regular" over the next few days, I challenge Grizzlies fans to find both. Find the patience to know that Dave Joerger is getting his feet under him as a head coach. He is not Lionel Hollins; from a schematic view point, and that will be a positive. As a manager and leader of men, it is yet to be seen if he is up to the task before him. But the Front Office believes he is, and dammit, that is what Grizzlies fans are about: belief. Be patient, and allow for Coach Joerger to find himself and the team to find their place within his vision for this version of the Grizzlies

Understand that with a new head coach comes new schemes, and in this case offensive scheme. When, as a player, you are so used to something, then it becomes upended, it does not matter if you are 23, 33 or 43, there will be a transition period. This team is the deepest it has been in some time, and there are new faces on this roster who are expected to contribute a good bit. A month is simply not enough time to gel so there will inevitably be growing pains.

Breathe. Step away from the cliff. This is the deepest roster in franchise history. It will get better.

Also, understand that this was the preseason. Do you know what the Grizzlies' preseason record was last year? 4-4. The greatest season in franchise history followed. This was a preseason in which starters sat, turnovers occurred and there seemed to be a general sense of apathy toward the entire idea. Do I support this philosophy? Hell no. But it is how it has been viewed within this organization for some time. I don't believe in "flipping a switch", and there will likely be tough times these first 2 months of the year. But I also believe in this team, and the idea that the talent assembled alongside Coach Joerger's schemes will enable them to reach heights even higher than the previous history of success.

Grizz nation, I am here to tell you, breathe. Step away from the edge of the cliff. For in every dark cloud, there is a silver lining. And upon further review, while last night was not what the FedEx Forum fans wanted, it was perhaps what the team needed and things will be ok. Here are 5 reasons why.

Omri Casspi led the Rockets in scoring with 11 points. Marc Gasol played a little over 28 minutes and still scored 17 points with 8 rebounds and 2 blocks. Kosta Koufos got his first action in several games. Tayshaun Prince got his first game action all preseason after dealing with what apparently is a terrible sickness which make an already skinny man much skinnier. 32% from the field and 13% from 3 point land doesn't happen to an NBA team very often over the course of a regular season. The most minutes any team's player got was 28, and that was Marc, likely because of easing Kosta back in.

More playing time, more focus, more intensity, like it or not, this team did not take the preseason seriously enough. But the best part about that is that none of it matters in terms of record. The team has 4 days until opening night. Correct mistakes, move on. Speaking of mistakes...

One of the major issues this preseason has been turnovers, and that manifested itself again last night; the team had more turnovers (21) than it did assists (13.) You are unlikely to win any basketball game in which this occurs. The piss poor shooting is also a concern, as this team's Achilles heel is scoring consistently. Any night in which Marc shoots 30%, Jerryd Bayless and Mike Conley shoot 2-10 COMBINED and Kosta Koufos shoots 3-7 from the free throw line, is a tough night for a Grizzlies lineup that struggles to score. Here's a shot chart you will not see too often- 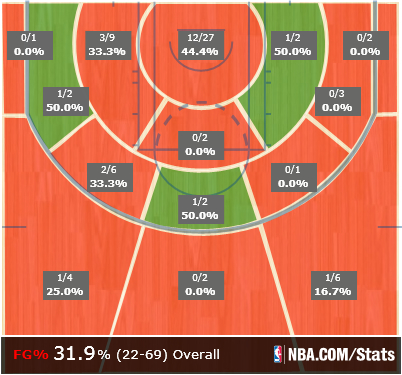 But the beauty of this problem is, it is fixable. You adjust to scheme and pace through repetition; the roster will continue in both early season games and practice these next few days to find sets they are most comfortable in and Coach Joerger will rely on developing what works and dumping what doesn't. And we as fans also don't know what all of the system is truly installed; he may be showing base stuff, saving the real nuts and bolts of the motion offense for Wednesday and beyond. Coaches will not get too creative in the preseason, whether it is high school, college or pro. If you think you've seen the best of this offense, you're wrong.

On top of all of that, Marc's shooting percentages were low for him, and he still had a 17-8 game. If 17-8 is a bad game, I can't wait to see the inevitable great ones from the best big in the world. Yeah, I said it.

And thankfully for the Grizzlies, aside from opening night in San Antonio, the early schedule isn't awful in terms of competition; Pistons, Mavericks, Celtics, Pelicans then a 2 days break before the Warriors at home on a Saturday night. 4-2 in that stretch, with possible growing pains still evident early on? I will take it.

I give Leuer this nickname because I believe he just fits with any lineup and any set that Coach Joerger will run in the motion offense. And that will benefit Jonny-Leu, because behind the possibly extended Ed Davis and Zach Randolph minutes will be few and far between. But at points where there is foul trouble, or stretch 4 match-up possibilities as there will be against this very Rockets team, "The Puzzle Piece" will be able to shine. There was a sequence in which Leuer's man collapses on a driving Ed Davis, and Ed makes a beautiful pass around the man to Leuer for 2 points. Leuer was also more aggressive in the paint this game. Here is his shot chart from last night- 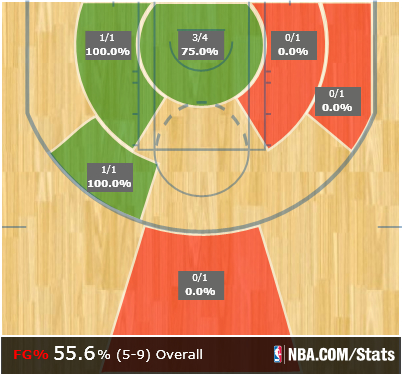 If Leuer can be interchangeable and fit in with various guys, he can help space out the paint and keep other bigs fresh. And if he is saving his new 3 point shot for the regular season, that would be great also. Get on that.

3-5 from the field, 4-4 from the line, 10 rebounds in 24 minutes of work. Zach, more than any player I can remember, knows his body. He knows how to position for rebounds, he knows how to use his center of gravity on the block and he knows when he needs to get in shape and turn on the jets. Four turnovers are concerning for a post player, but part of that can likely be attributed to trying to make a play when getting run out of the gym. Zach and Marc will be leaned on heavily early this season; how well they play together will offset some possible issues of continuity between the wings and guards as new faces find their roles in real game situations.

We're going to need the "brothers from another mother" to do some mashing these first 2 weeks. Zach may well be up to the task.

A Grizzly Symphony of Offense 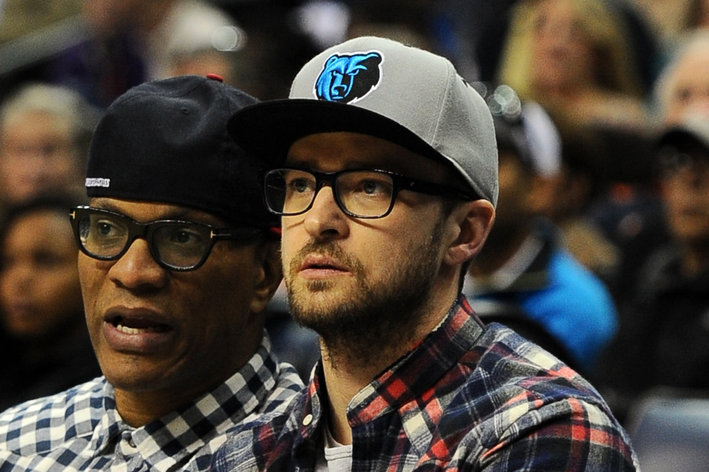 What's it going to take for some offensive harmony?

Whether it is Ed Davis showing play-making ability with 3 assists to lead the Grizzlies on a tough night for assisted baskets, or Kosta Koufos gobbling up 6 rebounds in 14 minutes of play, or Tony Allen going 4-4 from the free throw line, there are flashes of positivity in the storm of doubt. Any coach will tell you after any game that the film is never as bad as you think, or as good as you think. You are not as bad as you think you are, or as good; the answer lies somewhere in between.

And that is the case with a Grizzlies team still struggling to find themselves under a new skipper. Players such as Mike Miller, Quincy Pondexter and Nick Calathes have all had wonderful preseason performances which were followed up by mediocrity or worse. But which will show up starting Wednesday, when the games matter, when pride is on the line against the team that ended your postseason last year in sweeping fashion? It will likely be somewhere in the middle. A Miller for 3 here, a Pondexter drive and the foul there, a JB long 2 several times. This team will grit. This team will grind. This team will continue to evolve and find themselves along the journey of an NBA season.

There were dark clouds this preseason, the darkest being the past two games. But the silver linings are that it is over, the season is upon us and it is time for the tough to get going. And there is no one tougher than the Memphis Grizzlies.

On to San Antonio. Grind forth.