On the eve of the biggest Fantasy Basketball draft involving fans and Grizzlies bloggers in history, The Battle of the Blues, we take a look at three one-stat titans and three possible sleepers that you can ride all the way to a championship.

The time is drawing near! The first annual "Battle of the Blues" fantasy basketball league pitting Three Shades of Blue against your beloved Grizzly Bear Blues drafts Sunday, October 27th at 7:30 CST. And while the auction-style draft will surely have someone overpay for Tony Allen and underpay for Chris Paul, there will be several selections that will be quite impressive. And usually these picks have to do with one-stat contributors and sleeper picks, players who will either dominate one statistic in particular to give you an edge in that category or guys who are under the radar right now but are likely to explode this coming season. So, in your own league, who are 3 individual stat stuffers and 3 sleepers you can impress your competition with?

Just because someone is going to overpay for him does not mean he isn't worthy of a roster spot. And while he is not the most shooting proficient wing you will ever have on your roster, he does do one thing particularly well among shooting guards; Steals. Tony averaged 1.5 steals per game last season, good for 8th among fantasy players qualifying for the shooting guard position. And Tony had averaged 1.8 steals per game in the 2 season before. He is regarded as the best perimeter defender in the NBA for a reason; he anticipates in passing lanes well, is aggressive and forces turnovers.

If you want steals help, Tony Allen will be cheap, available late in drafts and can put you over the top in the steals category.

Hard to imagine that Zach Randolph would be considered a sleeper at any point in life. But on the fantasy court, he is exactly that. I participated in a draft several nights ago in which he was drafted 69th overall. And that is about the average draft position he is being taken in YAHOO! fantasy basketball leagues, behind players such as Derrick Favors, Chandler Parsons and Jeff Green. He also, in auction styles drafts like "The Battle of the Blues" will be, is going for an average of $9 out of a $200 budget,

Z-Bo is an elite rebounder and can help in points categories as well, and all at good value.

Zach is in a position to take a step back offensively, but even if he does he will still likely score 12-14 a game and he is still elite when it comes to rebounding. Zach has not averaged double digits rebounds only once the past 5 seasons. If Zach can keep a decent shooting percentage both from the field and the line, he can be a steady 2nd PF behind a Bosh or Nowitzki who aren't as strong on the boards.

As a Wizards sympathizer, this one hurts my heart. Mostly because while extremely gifted, McGee with the Wizards was an idiot. Here is exhibit A...

And here is Exhibit B, alongside fellow dummy and former Wizard Nick Young:

However, Javale is a tremendous shot blocker. He has averaged 2 or more blocks 3 of the past 4 seasons, and in those seasons he has played no more than 27 minutes a game. With Kosta Koufos now a Grizzly and J.J. Hickson there as a tweener backup behind McGee and Kenneth Faried, the minutes will likely increase so Nuggets brass can validate giving him such a big contract. His shooting percentage is also solid (54% for his career), but his free throws (a career 58%) will hurt your cause in that category. If you can put up with his boneheaded mistakes and all-around annoyances, he can help you in blocks for sure.

The likely rookie starter for the Utah Jazz at point guard, Burke is an example of another solid all around fantasy rule- late in drafts; find guys who will get you minutes. And Burke will almost certainly do that. He will likely not be the strongest shooter from the field, as he has struggled with his shot both in Summer League and in the preseason. However, rookies give great value in late round situations, and if you are in a keeper league Burke and others would be worth a late flyer to see what comes of them in the coming years. Assists, steals and three pointers made will be categories Burke can help with and could be a steal, depending on when he is taken or for how much.

Delfino is not a tremendous percentage shooter; 40% for last season. He doesn't shoot enough free throws for his percentage matter much, he gets assists and steals at an OK clip. What he does very well, is make 3's. And bunches of them. And it is important to point out here that the stat kept in most NBA fantasy leagues is three pointers made, not shooting percentage. So, guys who chuck it and make it should be valued. That means Shane Battier, Vince Carter, Martell Webster and Randy Foye should also be looked to late in drafts to assist with three point shots made. Prioritize these one-stat superstars by minutes; whoever gets the most minutes and makes volume threes should be your focus. Delfino and Webster in particular fall under that category. 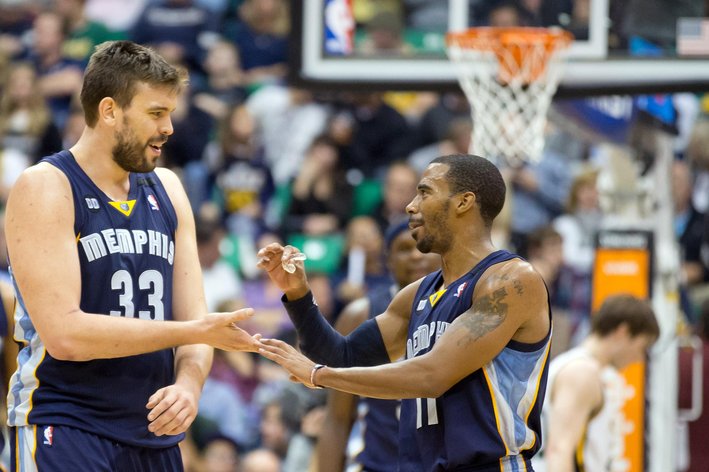 A breakdown of Memphis Grizzlies to take and avoid on draft day.

The recent beneficiary of a trade out of Tanksville, USA (also known as Phoenix), Gortat joins a Wizards team who just got worse defensively, but a lot better offensively. Gortat shot 52% from the floor last season and took lots of shots, which will likely continue with the Wiz. The fact that he rebounds and blocks shots also helps him. With John Wall's slashing ability, Bradley Beal's ability to stretch the floor and Nene playing the 4 position, where he belongs, Gortat can see an uptick in his numbers across the board. he is currently ranked behind Jonas Valanciunas, Amir Johnson and Enes Kanter. Gortat is worth a flyer for a 2nd for 3rd C.

The season starts Tuesday! Be sure to get your drafts in between now and then. Next week I will post a recap of "The Battle of the Blues" draft. Until then, happy drafting!