With the start of the 2013-2014 season just one month away, GBB will be doing a series of player previews to prepare you for the return of Grit 'n Grind.

There is a reason why Memphis Grizzlies fans are excited for some of the offseason additions. Why? Well this list is why:

Every above player named has been the reserve center since the trade of Pau Gasol. And these players are the reason why Marc Gasol has played the second-most minutes by a center since the 2009-10 season, behind Dwight Howard.

Things will be a bit different this season for the sixth year center out of Ohio State. He'll go from splitting time with Javale McGee and Timofey Mozgov to being the designated reserve center. His minutes will drop from the 22.4 minutes per game he played as a starter for the Denver Nuggets to around 14-15 a night, similar to Omer Asik during his time behind Joakim Noah with the Chicago Bulls.

Why Koufos is Key 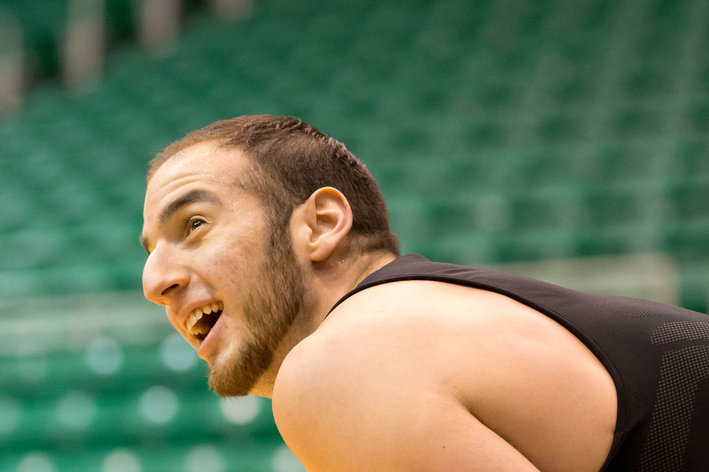 More on the underrated acquisition of Kosta Koufos.

And in that time he'll have one main job: to keep the defense afloat when he replaces Gasol. Outright comparing Koufos' defense to Gasol's isn't fair as Gasol is far ahead of the young center, but Koufos will be able to keep up a level of defense the second line hasn't seen in years. Last season the defensive rating for the Grizzlies when Marc Gasol was on the floor was 95.4 (h/t NBA Stats) which would've been the best defensive rating in the NBA by point. But when Gasol exits the floor? That number dips to a whopping 102.2. That's Houston Rocket-ish. For a team who aspires to win a championship, improvement while their best player was off the floor was desperately needed.

Koufos' plus/minus numbers weren't great due to the pace the Denver Nuggets kept up and his minutes, but he was the best big-man defender the team had to offer. Instead of being alongside Kenneth Faried, who was quite the defensive hindrance last season, Ed Davis will be beside him in the front-court which will serve as a pretty good defensive tandem when you combine Koufos' post-defense and Davis paint-defense. Teams will be in for a rude awakening even when the reigning Defensive Player of the Year is on the bench.

don't be surprised at what Kosta can do on the offensive end.

As far as offense goes, don't expect too much from the big man. At the same time don't be surprised at what he can do on the offensive end. Koufos isn't mobile, but he knows where the fill in spots on the floor to get the easy shot. His knack for "cutting" is why he shot an impressive 67 percent (h/t: Basketball-Reference) at the rim last season. He also has a deceptive hook shot (shot 51 percent on hooks) that most fans don't know about. Jerryd Bayless, Quincy Pondexter, Mike Miller and the team's other scoring wings will enjoy playing alongside Koufos as his best skill is offensive rebounding. He finished 20th in the NBA in offensive rebounds and captured a 13.3 percent of available offensive rebounds when on the floor. That was fourth in the league behind Zach Randolph, Tyson Chandler, Roy Hibbert, and Reggie Evans. In other words, he's in a pretty good class.

Outside of Omer Asik, who may not be in his position for long, you won't find a better backup center in the NBA than the Greek big man. He fills a void the Grizzlies have needed occupied for a long time and his talent isn't one that will have to be worried about or guessed about since he's proven to the NBA he can be a starter in this league. Between Koufos and Gasol, the Memphis Grizzlies will be positioned to hit teams with 48 minutes of good defense at the center position, which just happens to be the most important position defensively. You can't say that about many teams in the league, and Kosta Koufos just made the best defense in the NBA a whole lot better.