Finally, the games count and the Memphis Grizzlies open the 2013-2014 campaign. To begin the season, the Beale Street Bears visit division rival and a perennial favorite in the Western Conference, the San Antonio Spurs. Have the issues of the past 2 preseason games been addressed? Or will the Spurs expose this Grizzlies offense as they did back in June during the Western Conference Finals?

How You Can Watch/Listen-

The Grit and Grind Grizzlies return tonight as they take on the San Antonio Spurs in San Antonio. And make no mistake, this is a big game. Most prognosticators and pundits put the Southwest division as one of the most difficult and deep in the Association. The Spurs and Houston Rockets both almost universally picked to finish above the Grizzlies while the Dallas Mavericks and New Orleans Pelicans are expected to be better than they were this time last year.

If the Grizzlies hope to finish in the top four of a dangerous Western Conference, they cannot afford to ease in to any regular season game. Despite the fact that they are underdogs going into this contest, the veteran Grizzlies would be wise to approach this game as any other, an opportunity for a win. The Spurs will be dangerous, as always. Tim Duncan and Tony Parker played at an extremely high level last season, and young players Kawhi Leonard, Danny Green and Tiago Splitter made major strides as their games developed. There is a reason why I chose them as the preseason favorite in the West; until they are unseated, I respect Coach Gregg Popovich and company.

1. How Does Tayshaun Prince Perform?

Tayshaun Prince, who has been ill with a stomach bug for most of the preseason, looked the part in the last preseason game against the Houston Rockets; 0 points, 15 pounds slimmer and out of sorts in an all around discombobulated showing. But Tayshaun has been slated as the starter (at least for now) if he can physically play, and hopefully the few days building up to Wednesday's game allowed for Tayshaun to get his legs under him, if even for 20 minutes or so.

Tayshaun Prince's presence in the game will greatly influence the outcome, for better or worse.

Despite the rumors and debate on whether of not Tayshaun should be a Grizzly, at the moment he is. And when healthy, he is a very good distributor of the basketball, particularly in the post, and he is also a lengthy defender who can cause issues for players such as Leonard and Danny Green on the wing. I forsee limited minutes for Tayshaun tonight as he reacquaints himself with the speed of the game, but how effective those minutes are could mean all the difference for the Grizzlies on this night.

Manu Ginobili, even in the twilight of his career, is a danger to go off offensively on any given night. And Marco Belinelli started 27 games last season for the Chicago Bulls and averaged about 10 points per game in 26 minutes on 36% three point shooting. These two players will be depended on to score consistently with Parker, Leonard and Green on the bench at various times during the game. How Quincy Pondexter, Jerryd Bayless and Mike Miller defend these two and counter their offensive prowess will be key. Ginobili is a drive and dish threat even while a step slower, and his ability to find teammates like Boris Diaw open underneath the basket or Belinelli on the perimeter could be difficult to stop if help defense is not executed properly.

Quincy Pondexter has been complimented for his defensive prowess both locally and nationally as of late. Against Ginobili and crew would be as good of a time as any to showcase that development, enabling the bench to either keep or build upon a lead the starters create.

Speaking of defensive prowess, nights like tonight should make Grizzlies fans very grateful that Mike Conley and Tony Allen, arguably the best defensive guard tandem in the NBA, are donning the Beale Street Blue. They will both likely draw the assignment for much of the night of defending Tony Parker, who is arguably the best point guard in the NBA when healthy and at worst a top 5 point guard overall. Tony Parker was an early favorite for MVP last season, largely because of his ability to finish at the basket. Check out his shot chart from last season: 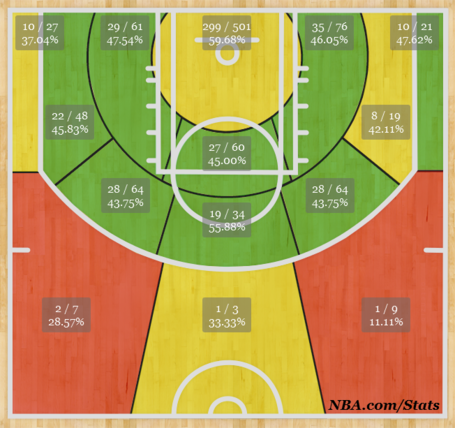 An almost 60% finisher at the rim, and that doesn't include the drastic strides he made in his mid-range game. He is a tough cover for anyone, and Conley and "The Grindfather" will have their hands full. How they defend Parker and make life difficult for him will likely have a hand in who wins this game. Parker is a tremendous talent, to be sure. If the Grizzlies can force him to stay out of the paint through aggressive rotations and quick feet and collapsing on the dribble drive, they will force others to beat them. And with the length of Gasol, Kosta Koufos and Ed Davis in the lane Parker should have a tougher go of it this season in terms of finishing consistently against the Grizzlies.

Zach's struggles against the Spurs in the Western Conference Finals have been well documented, as have the possible reasoning for such struggles. Whether it was aging before our eyes, or Spurs defensive scheme collapsing the paint, Z-Bo was not his usual self the last time he saw this San Antonio team. Shooting 30% from the field while shooting 50% from the free throw line is not very Z-Bo-like. For the Grizzlies to defeat the Spurs, Zach will have to be able to move out of and around the paint. Not exactly like Marc, who has more ability from the elbow than Zach, but whether it be through off-ball screens in the post, on the roll off of a pick or early positioning on possible offensive rebounds Zach has to be more effective against this Spurs team.

Zach will have to be more aggressive off the ball to find positioning for his shot.

A lot of the concerns from that Western Conference Finals had to do with spacing. Hopefully with more motion and more effective long range shooting, Zach will be able to put up a better performance.

5. How will the Lineup Rotations be organized?

New faces Kosta Koufos, Mike Miller, Nick Calathes and not-new-but-newly-freed-from-the-doghouse Ed Davis will figure largely into what some have said (myself included) is the deepest bench in Grizzlies history and possibly in the entire Western Conference. But who will play with who, and how will minutes be distributed? It is unlikely that the final answer is seen in tonight's game, or in the first two weeks of the season. Coach Joerger will be constantly tweaking scheme and rotations, giving minutes to those who best execute the offense and give the most effort on defense. Koufos and Davis in particular will be fun to watch; the pace of the offense will likely pick up with them on the court. And Mike Miller's minutes as floor spacer extraordinaire will be invaluable for whoever is on the court with him.

The Grizzlies will have better energy and focus than they did in their last two preseason games, and the offense will execute more efficiently because of it. Mike Conley will score 20 points and get 7 assists, while Marc Gasol scores 16 with 5 assists and 3 blocks. However, Parker, Popovich and Duncan will take the victory on this night behind a big effort from Danny Green and Kawhi Leonard.