Memphis Grizzly Discombobulation: Do More on the Court and Less in Your Heads

We knew there'd be some Joerger pangs, but the Grizzlies look like they are still figuring out far too much on the fly.

Share All sharing options for: Memphis Grizzly Discombobulation: Do More on the Court and Less in Your Heads

With the defeat in San Antonio last night, the Grizzlies have now played three consecutive games where they looked ...umm... really stinking bad. The effort lulled, the shots bricked and the defense over-helped. But step away from the ledge, those were 2 preseason games and a opening visit to the Western Conference champions, champions who just have our number right now, honestly.

Being swept out of the Western Conference Finals last season is a sensation that the Grizzlies hung on their shoulders all offseason. They left the big stage feeling embarrassed, and probably feeling like they owed it to themselves, and the city, to level the playing field during the summer. Quincy Pondexter even mentioned, during his presser after game 4 of the WCF, that the Grizzlies were looking to steal of few tricks out of San Antonio's bag. 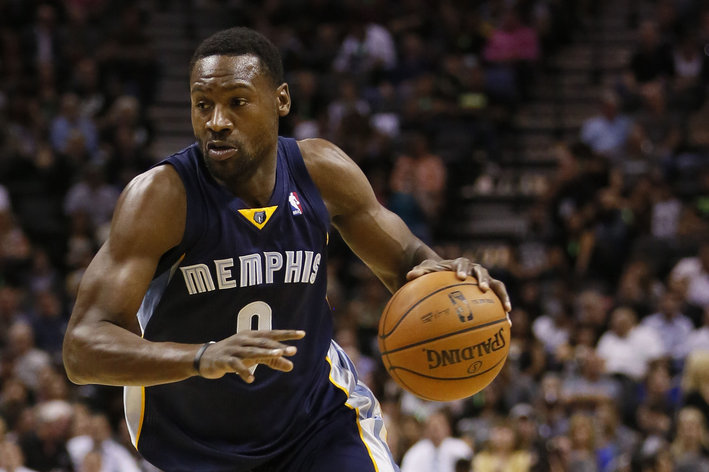 Memphis fell behind early and could never get synchronized against San Antonio.

Perhaps that bag is still being pilfered through, because I didn't see much resemblance between the two teams that played last night. But we didn't really think the Grizzlies offense would transform into a Popovich system over a 4-5 month offseason, did we? Although pro sports is a copy-cat band of leagues, you don't always have the right scenarios and tools to become the teams that you want to emulate. Most times, with coaching changes, there is a transitionary period filled with compromise, adjustments and patience. I love watching Iron Chef, but until I can get my hands on the wagyu beef, the emersion circulator and $500 knives, I'm not going to stand much of a chance to recreate anything I see them doing.

Moreover, the nuances and fine details of something like an NBA offense aren't conjured or implemented through a morning email and some memos. An NBA offense is more akin to a mechanical watch that has dozens of moving parts. A watch whose quality and success is based on all of those parts maintaining a very specific rhythm and sequence.

Although pro sports is a copy-cat band of leagues, you don't always have the right scenarios and tools to become the teams that you want to emulate.

That is to say, when the play the Grizzlies run calls for 4 perimeter passes that eventually land on an open Mike Miller in the corner for three, all of those passes must be executed in a specific way for the result to come out as desired. The second pass can't clip Tony Allen's shorts and cause him to reach down to secure the ball. The third pass can't come from someone that just turned his head the wrong direction for a split second. This concept becomes even more paramount when you attempt to rotate the ball for a full 20 seconds in an attempt to find the best, open shot.

Then what's the problem? Why can't our Grizzlies, supreme professional athletes, just translate a drawn up play into physical execution?

Part of the issue may be that they are trying to keep time with a watch that's simply not fully assembled yet. It's going to be a difficult progression from one of the very slowest offensive paces in 2012-13 to what would be a pace that even ranked somewhere in the middle of the NBA. The team must retrain themselves to operate in what will eventually look like perpetual motion, a cycle of decisions and passes that lead to defenders thinking more than they want to.

And, conversely, that's the biggest issue - the Grizzlies are thinking more than they're playing. The offense hasn't become reactionary to a level that leaves opposing teams scrambling to cover open players and making mistakes and committing silly fouls. Right now, the Grizzlies are still that mental half-step behind each other, and that's allowing opposing defenses to dissect plays while they're forming, leaving Memphis working harder for a smaller payoff.

So my advice to the team is simple: stay the course, don't get discouraged, and get better at executing everyday. Because, Grizzlies, we need your feet and arms moving on the floor, not the wheels churning in your head.