Part of the return package for Rudy Gay, Tayshaun Prince was entrenched as our starting small forward last season. He played old, but not entirely bad. It's likely more of the same this season.

We didn't trade Rudy Gay to get Tayshaun Prince. Well, okay, we did. But Tayshaun Prince wasn't the specific target of our trade. The purpose of that trade was to offload Gay and his bloated contract, and both Prince and Ed Davis just happened to be the by-products of fulfilling that purpose.

Of course, that's not to say Prince and Davis are dismissible players. The guys in that front office negotiated their way to this deal for a reason. Davis, the young 24 year old big, has been a popular topic of discussion this offseason. (You can read Joe's preview on him here, as well as this analysis piece from TheRealHrdlicka here.)

What about Prince? This season will be his first full season playing for a team other than the Pistons, and in the ten seasons since he joined the team, he's reached the NBA veteran stage of his career. At 32 years old, a lot of his game has withered away. For the Grizzlies last season, he averaged a mere 8.8 points on 42.9% shooting, 4.2 rebounds and 2.3 assists in 31.7 minutes per game. Much of his athleticism is gone, although he still had this left in him.

That dunk didn't exactly personify the best of what Prince has left. At this point, Prince holds most of his value on the opposite end of the floor. Alongside Mike Conley and Tony Allen, Prince might seem an underwhelming defender. However, while he's fallen some since the days of "The Block" and being the Pistons' "Kobe stopper" in the 2004 Finals, Prince was still able to fit in nicely for the Grizz defensively.

Prince is a much more careful defender than Conley or Allen, which might be part of the reason he doesn't shine as brightly as them. Instead of making the highlight steal, he's a master of positioning. Using his length to his advantage, he's great at cutting off lanes or forcing a defender into the corner or a help defender (such as Marc Gasol). Among their lineups that played 75 minutes or more last season, Prince was in the three lineups that allowed the lowest opponent field goal percentage. Of course there's more variables than just Prince to consider, but it does speak to the his subtle value on defense, especially alongside such teammates as Gasol, Conley and Allen. That's a very formidable defensive core. 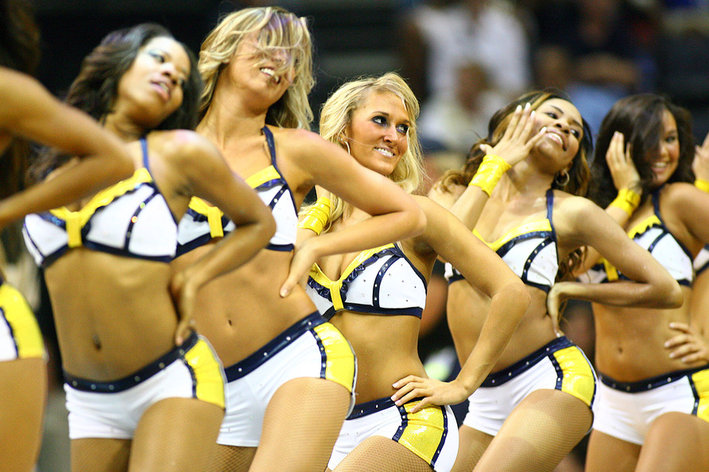 After defense, the rest of Prince's game could be described as mediocre across the boards. The rebounding and passing were nice to have from the small forward slot, even if unimpressive, and he kept his fouls and turnovers low. You could've asked for a few more points from him, but at least he wasn't Rudy Gay.

Apart from a relative lack of impact in any specific area, Prince's biggest problem for the Grizzlies was his shooting ability. His shot form was difficult to watch, and defenders regularly allowed Prince to take the open shot from outside. 36.6% from three-point range isn't bad at all, but considering that was his percentage while attempting just 1.1 threes a game, it was really underwhelming. He wasn't much better in midrange, and certainly not good enough to make the defense respect him.

Throw him on top of Tony Allen, and you have a duo of wings that aren't outside threats in the least. In other words, opposing teams were totally free to roam far from them when they were stationed on the perimeter. That lack of offensive spacing made it difficult for the Grizzlies to run their offense, especially since so much of it revolves around Marc Gasol and Zach Randolph in and around the paint.

A natural decline is expected as he continues to grow older, but Prince was never a player that relied on athletic skill.

Next season, it looks like Prince is back as the starter – at least he is heading into the season. He's a nice defensive piece, but I do have to question Joerger's decision even if it came at an extremely premature stage. By bringing the same starting lineup back, he's bringing back the issues that plagued it, namely the almost complete lack of three-point shooting. I'm biased in Quincy Pondexter's favor, but it really does seem QPon's three-point shooting ability and passable defense (keeps up well with smaller players, although his lack of size hurts him a bit against typical small forwards) would outweigh what Prince brings to the table.

If Prince remains the starter when we get into regular season, it's safe to expect similar production to last season. A natural decline is expected as he continues to grow older, but Prince was never a player that relied on athletic skill. Having a full training camp with the Grizzlies might offset that some, as well.

It's likely that Pondexter and Mike Miller will eat up some of Prince's minutes as a starter (with Pondexter likely to challenge for that spot as the season progresses), and that's probably for the best. As long as he's a starter, Prince's lack of shooting ability coupled with Allen's own will remain a problem for the starting lineup. However, he'll offer size, length and defensive instincts that the team wouldn't be getting from Pondexter, and that'll keep our identity intact as one of the league's toughest defensive teams.