Nick Calathes is yet another low-cost acquisition for the Memphis Grizzlies. Although he is not the deadeye shooter that some hope for, he is a solid guard capable of playing both positions. He might also be the most balanced option to play alongside Mike Conley.

When the Grizzlies acquired the draft rights to Nick Calathes-drafted with the 45th pick of the 2009 NBA Draft by the Minnesota Timberwolves, his rights were then traded to the Dallas Mavericks-it was a curious move.

On the one hand, it was perfectly in keeping with the Grizzlies' recent philosophy of pursuing low-cost, but undervalued role players, a strategy which has consistently borne fruit for the team. However, unlike other rehabilitation projects such as Dante Cunningham or Marreese Speights, Calathes hasn't played at all in the NBA. The only other recent Grizzly of whom the same could be said was Jeremy Pargo, who didn't cost Memphis very much, but who also could not produce at an acceptable NBA-level. Additionally, Calathes only superficially fills a need.

Pondexter could change the Grizzlies' plans 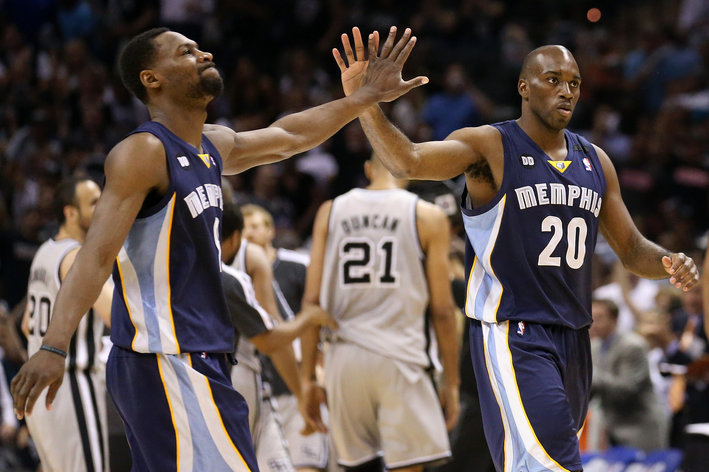 European players are traditionally thought off as being at least solid, if not, deadeye shooters. Considering that the franchise has been clamoring for a shooter for almost five years, Calathes would seem to fill this hole perfectly. Unfortunately, Calathes is the exception to the stereotype; during his three seasons playing for Panathinaikos, his averaged less than thirty percent from the 3-point line (which is also closer to the basket than the NBA 3-point line, to boot). Although he shot a slightly more-respectable .355 during his final season in Europe, one can safely assume that he will not be the marksman that Memphis has sought.

That being said, Memphis has spent enough resources in their acquisition of Calathes-the second-round pick and cash considerations given to the Mavericks in exchange for his rights as well as money contributing to buy-out his contract from his current team-that suggest that the organization holds him in some esteem.

At 6 ft. 6, Nick Calathes has great size for either guard position, and he has the skill to play either position. As a ballhandler, he is a crafty penetrator and finisher, although he doesn't play above the rim. Additionally, he's a steady playmaker who shows good composure and limits his turnovers by not forcing passes.

At 6 ft. 6, Nick Calathes has great size for either guard position.

His jumpshot mechanics are actually quite sound, and he's at his best when he has time to set his feet. His shot selection is also quite good, which is reflected by the fact that his overall field goal percentage is quite high in spite of being only a mediocre jump-shooter.

Yet, it is defense where Calathes really has the potential to excel. He makes great use of his size to defend his opponents and has a knack for disrupting passing lanes. Although he is not overly quick, his combination of size and instincts should make him a solid NBA-caliber defender.

When the Grizzlies initially acquired his rights (and subsequently dealt Tony Wroten to Philadelphia), the organization appeared to be clearing space for him in the rotation. The return of Mike Miller and the presence of rookie Jamaal Franklin as well as the return of Jerryd Bayless could potentially cause some complications, but the Memphis does at least appear to be committed to Calathes on some level. Certainly for Grizzlies' fans used to bemoaning the team's lack of depth in years past, an abundance of quality roleplayers is a good problem to have.

an abundance of quality roleplayers is a good problem to have.

Training camp and preseason performances will certainly have an effect on the rotation, but it would seem likely that Calathes will be Mike Conley's primary back-up as the season begins. At the very least, he will probably be a much steadier running the offense than Jerryd Bayless, who often looked uncomfortable in that role last year. Additionally, he could also see playing time alongside Conley as well. Although Bayless or Miller would be more potent offensive options, and Tony Allen is certainly the better defender, Calathes is likely coach Dave Joerger's most balanced option.

Predicting playing time for rookies, especially on a team deep with talent like the Memphis Grizzlies, is always difficult, but given the organization perceived preference for him, Calathes will likely average 10-15 minutes per game this season. Currently, Calathes would seem to project as a Kirk Hinrich-type player, which, given the small cost to obtain him, figures to be yet another excellent low-cost move for the franchise.