Coach Joerger takes the helm of a double edged sword: a well-oiled machine with sky high exectations. These aren't the 7 largest questions entering the season, but here are 7 trends to monitor as the season progresses.

Ahh, fall is in the air. The foliage shrugs off its drab green wardrobe, for a vibrant array of yellows, reds, and oranges. The air turns crisp. Pumpkin spice emanates from every Starbucks in America, and, most importantly, the beginning of the NBA season beckons. Rather than preview the season with answers, let's start where every season begins. With questions.

1). Will Coach Joerger Really Push the Pace - The buzz since Coach Joerger took over has been about playing faster. It is important to understand why teams play fast. There are three main benefits to playing fast:

(A). Take advantage of depth.

(C). You are better than your opponent.

Point (A) is obvious. Running requires effort. An 82 game season is a war of attrition, and the thing being attrited is the other team's legs. Point (B) is a different philosophy than the "7 Seconds or Less" mindset, which is predicated on shooting quickly. It has more to do with extending the amount of time the offense is a threat to score. In the NBA Finals, the Spurs ran the ball up court nearly every possession of a 7 game season. They were happy to take a quick shot - if it was high percentage. Their goal was not to shoot quickly, but to increase the time they had to get a good shot. Defending is tough business. Defending for longer is even tougher.

Point (C) is the one that most people don't recognize, and it is simply about maximizing possessions when you have an advantage.

Think of every possession in basketball as a chance for arbitrage. Every blackjack player knows they have an advantage when they have an 11 when the dealer shows a 6. To exploit that advantage, the player doubles down. If the casino allowed this event to be repeated again and again, you would walk away a rich man. But in basketball, you can do this. If you have a lineup advantage against your opponent, you can repeat this event as many times as possible. In fact, this is pretty much what the game of basketball is: 5 men, playing against another 5 men, leveraging and minimizing each other's advantages. Plucking an extra advantageous possession a game when may be the difference between winning and losing.

Think back to the Grizzlies' series against the Thunder. By every metric - including that little thing called the scoreboard - Kendrick Perkins hurt the Thunder in the playoffs. Not only could the Grizzlies leave Perkins unguarded, but he also had trouble guarding the Grizzlies in the post. Memphis should have been killing themselves to squeeze an extra possession or two into Perkins minutes (conversely, they should have played as slow as possible when Mike Conley needed a breather).

This may be where the Grizzlies "up tempo" offense settles. A tool, pulled selectively from the belt, to double down when the dealer shows a 6. 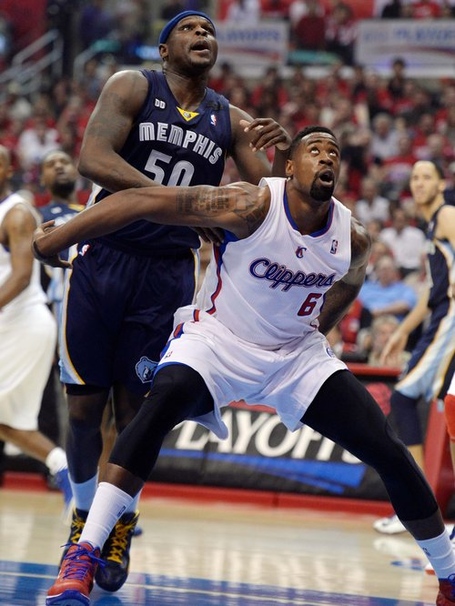 2). How Will the Grizzlies Adjust When Opponents Go Small - Last year, the Grizzlies tended to stick with big lineups when the opposition went small, especially when it occurred in between Zach Randolph's "scheduled rest." At least at first. To stave off mini-runs, Coach Hollins' first answer was inserting Darrell Arthur at power forward. As a last resort, Hollins brought in Tayshaun Prince, and Prince did a remarkable job in many spots.

What is the answer this year? I am a big fan of leveraging your strength, rather than matching an opponent's strength. There are several ways to win in the NBA, but in general it means playing your best guys. Even more so than last year, the Grizzlies playing their best guys means staying big for stretches when teams go small. Certainly this will not work forever. There will be times when playing big - to use the analogy of the last section - will mean dealing yourself a 6.

There has been talk of Mike Miller playing the 4, and while the concept is interesting (especially in late game scenarios), I am dubious about Miller being a go-to solution when opponents go small. Perhaps instead of changing their personnel, the Grizzlies should go the other way, which leads me to...

3). Twin Towers lineups - Playing 2 centers is very rare. Centers tend to gravitate towards the same space. On offense this creates spacing issues. On defense it creates matchup problems in a league dominated by spacing the floor around the pick and roll. Weirdly, on this Grizzlies team, Koufos's game meshes better with the center than with the starting power forward.

On offense, Marc Gasol is most effective at the elbow, and he is more than comfortable defending the pick and roll in space. Koufos is a demon on the baseline after a guard penetrates, and on the offensive glass. In an effort to unclutter the paint, Coach Joerger will need to consider playing Koufos with Gasol in Super-Big lineups, rather than pairing Koufos with ZBo.

Packing the Strong Side 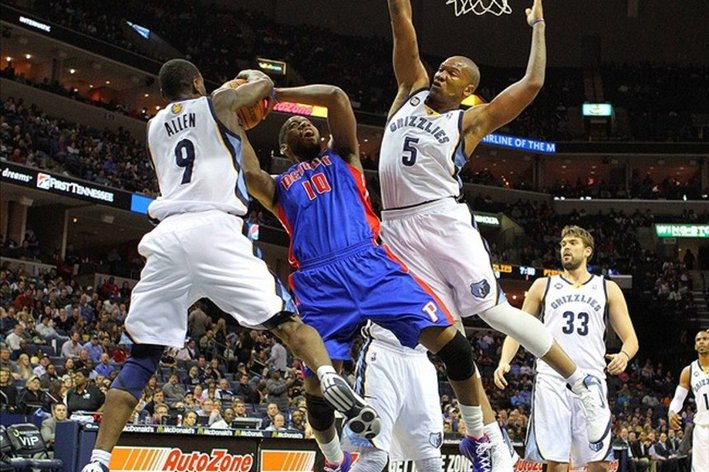 Why does the Grizzlies defensive scheme work?

I want to be clear: playing Koufos and Gasol together is not a solution to "find minutes" for all of the Grizzlies big men. In general, I think the idea of finding minutes for guys is a bit overblown. Having too many good players is not a problem. It is a solution to the war of attrition that is the NBA regular season.

There is an argument that trading one of the Grizzlies big men for an efficient scoring wing would be a better use of resources. But that player better be able to get on the court ahead of Bayless, Pondexter, Mike Miller and Tony Allen. And until a deal for that player materializes, let's call the Grizzlies frontcourt what it is: the best in the NBA.

4). How Will the 2nd Unit Score - While the Grizzlies brought in a bunch of new faces, the 2nd unit may still struggle to score points in the halfcourt. Last year the answer was Jerryd Bayless pick and rolls - often resulting in the "I-Hate-To-Beat-a-Dead-Horse-But-They-Are-Seriously-Not-Good-Shots" long 2's. Bayless hit 39.6% from mid-range last year.

Last year, Coach Hollins staggered ZBo and Gasol's minutes so he could focus the 2nd unit offense on postups. I question whether ZBo postups will be a sustainable offensive philosophy (though it would be wrong to suggest they should steer away from him entirely). I think, especially early in the season, it will be important to ease Nick Calathesinto the offense. And that means playing him with Gasol (and possibly also with Conley). Later in the season, Calathes/Bayless and especially Calathes/Conley backcourts may work extremely well, but it would be a mistake to assume the offense can function based around Calathes pick and rolls with Ed Davis and Kosta Koufos.

5). Will the Grizzlies Defend the Corner Three - The Grizzlies defensive philosophy often involved helping from the corners. This is increasingly odd for NBA defenses, especially elite ones. Defending the corner three is second only behind defending the paint. But the Grizzlies were a stellar defensive team without zeroing in on one of the easiest shots in basketball.

Every Grizzlies fan remembers the above clip of Derek Fisher shooting from the grave corner in last year's playoffs. This was bound to happen as the Grizzlies gave up quite a few 3 point attempts for an elite defense. Twenty-five percent of opponent's attempts came from 3 point range, almost exactly league average. Usually, defending the 3 point line is a recipe for defensive success. Run opponents off the 3 point line; keep them out of the paint; and make them take long 2's.

But the Grizzlies are clearly doing something right. They may have given up a ton of 3 point attempts... but nobody made them. Last year they gave up the 2nd lowest Effective FG% (a stat that accounts for a 3 pt shot being worth 1 more point than a 2) on 3 point attempts. My eyes tell me this is because the Grizzlies close out aggressively on shooters. A contested shot is much more difficult than a wide open shot, and the Grizzlies contest the hell out of everything.

It is difficult to argue with results. The Grizzlies are a great defensive team. Really, all that matters is how many times the ball goes in the basket.

It is also difficult to argue with math. NBA players, on average, make 38% of corner 3's, good for 1.14 points per attempt. That means only a 2 point shot that goes in greater than 57% of the time will yield more points per shot than a corner 3 over the long run. In other words: dunks, and Steph Curry jumpers.

The Grizzlies walk a tight rope. They bet they can get a hand in the face of long distance shooters, lowering their percentages enough that they don't mind giving up a league average number of attempts. This was probably a good bet to make when playing Tayshaun Prince, a lanky defender with his head on a swivel. It will be tougher with Mike Miller, a slower, less versatile defender. Allowing 3 point attempts from above the break is more than fine. I just want to make the Grizzlies' lives a little easier some of the time. It's okay to help from the corner if Kevin Durant is driving to the rim, just don't help from the corner when it's Matt Barnes. Stay home on the shooters, guys!

6). Will Coach Joerger Handle the Job? I was a big proponent of hiring Joerger, but I recognize that there is risk involved. In my mind, the risk is mitigated by his familiarity with the players, but to say there is no chance of failure is to ignore the difficulty of giving a first time NBA head coach a team full of veterans that made the Western Conference Finals last year. The Grizzlies have a locker room full of stubborn, successful veterans. Even Marc Gasol, for all of his unselfishness, has publicly questioned the coach that asks him to play a different way.

Coach Hollins had a pretty steady method: players that did not make mistakes played the minutes. Everyone else was on notice. Players like Ed Davis, Tony Allen and Jerryd Bayless probably go into this season with optimism that their situations will be different, that the new coach will wipe the slate clean. And while I personally think coaches should be willing to risk losing a few more games in the regular season to allow players to grow, I do recognize that, for a coach, it can be different.

I get the sense that the players believe in Coach Joerger, but belief is easy in early October.

7). WHITEWASH lineup alert - We end this Grizzlies coaching preview with what I consider to be the underreported story of the offseason. With Calathes, Miller, Leuer, Koufos and Gasol, the Grizzlies can now roll out the rarely-spotted-in-the-wild WHITEWASH! Sources say that Jon Leuer has been working on his 3 point shot specifically so he can get minutes as a WHITEWASH 3. The only real question is which NBA buzz-word will be tossed out first in the telecast. Vegas has "Hustle" as the early favorite, but the smart money is coming in on relative long shots "Basketball IQ," and "Intangibles." Seriously. Let's make this WHITEWASH happen.